A million years ago, I talked about pinball games. That was back when FX2 was the big thing and they were pushing the limits of what pinball could mean. The physical tables were limited by stuff like “physics”. Not only stuff like whether the balls were likely to get stuck after someone made a one-in-a-million hit at juuuuust the right angle, but stuff like wear and tear, and that’s without getting into the whole issue of how the machines were designed to get you to put in a quarter every 5 minutes or so.

Well, FX2 figured out that “hey, where we’re going, we don’t need roads!” and put together some seriously crazy tables. And, now, FX3 has upgraded a number of things (while keeping some of my old tables from FX2).

Rome (one of my favorites) has stuff like “running water” going down a couple of ramps, it’s got a statue that you can roll your ball into, and a catapult that will throw your ball onto a ship and the damage causes the ship to catch fire.

The rules for playing the game are pretty much the same as a “real” table… like, you’ll get a “mission” and have to roll your ball up a particular ramp or get a particular combo. But succeeding at doing that might give you a small animation on the board like lightning striking your ball as it’s held in the hand of the statue.

It’s got tables like Spider-Man and, seriously, this is nuts (click on the picture! Check out those details!): 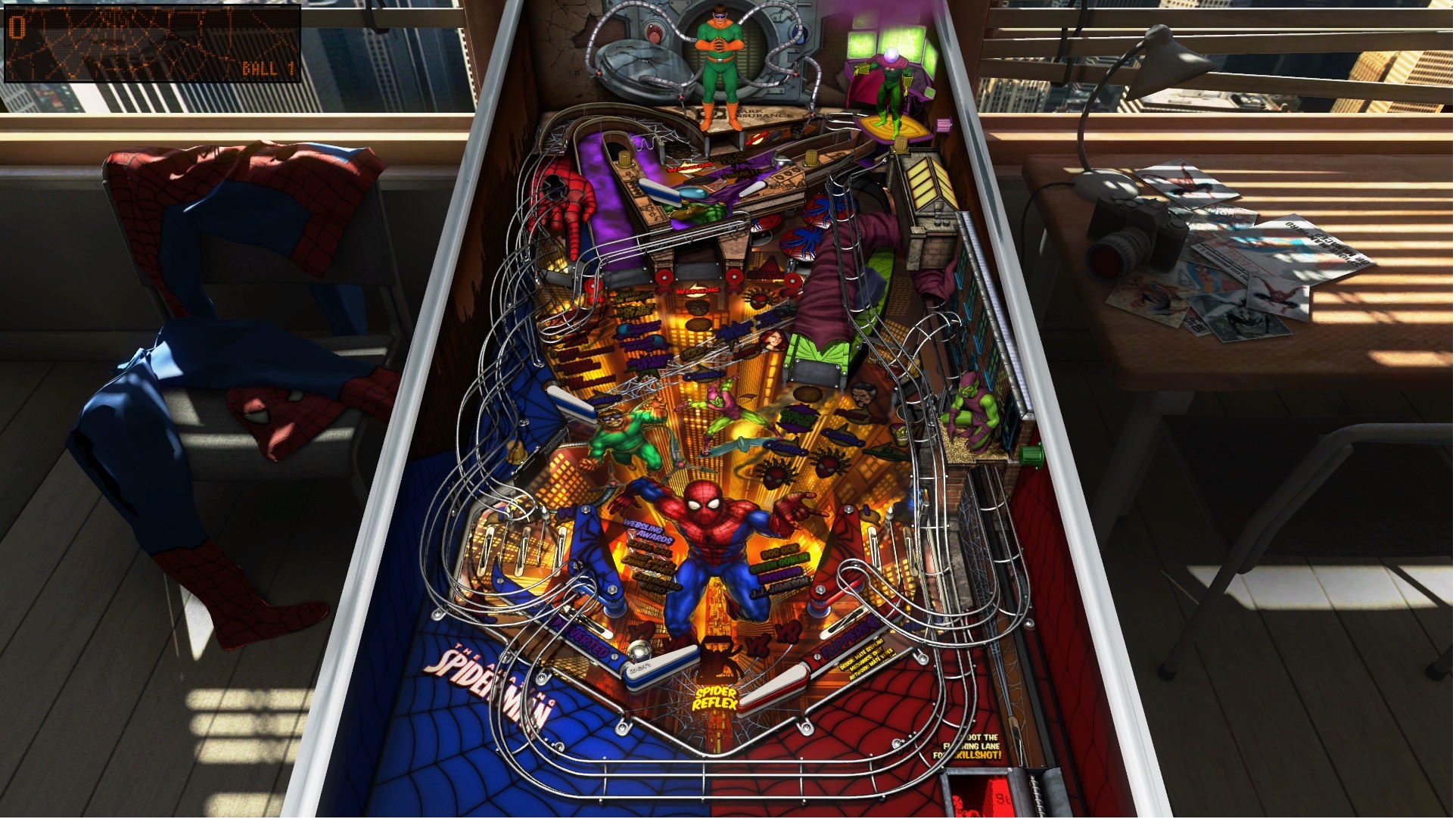 Look at all of those wire tracks! In the real world, a ball would get stuck in one of those in less than an hour. In video games, everything is oiled and runs to perfection.

They’ve also recently gotten a deal with Williams and they have the table that was in the common room of my Freshman dorm: The Party Zone. 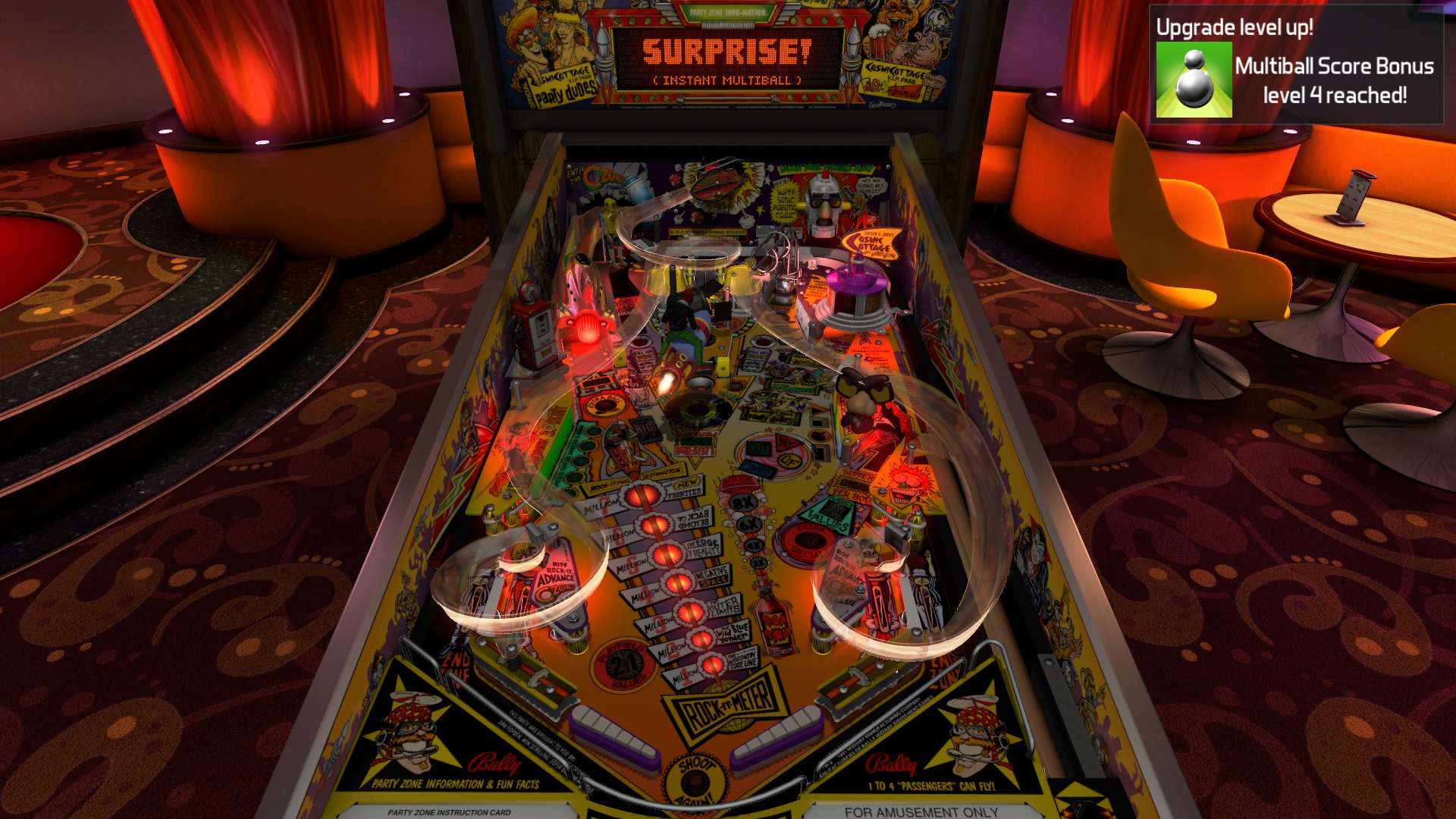 The physics are exactly like I remember. See those side gutters? Yeah, I still hit those things like they’ve got magnets. But it’s a table I thought I’d never play again… but here it is. And, on top of that, they put little touches like… having the Party Zone guy on the rocket in the middle of the table be animated. He’s no longer merely nodding along like one of those Drinking Bird toys. They also add little touches to the ball… for example, in The Getaway table, the ball can leave a little trail of fire behind it when it comes right out of the gate. It has no effect on the gameplay… but it’s a cute touch. 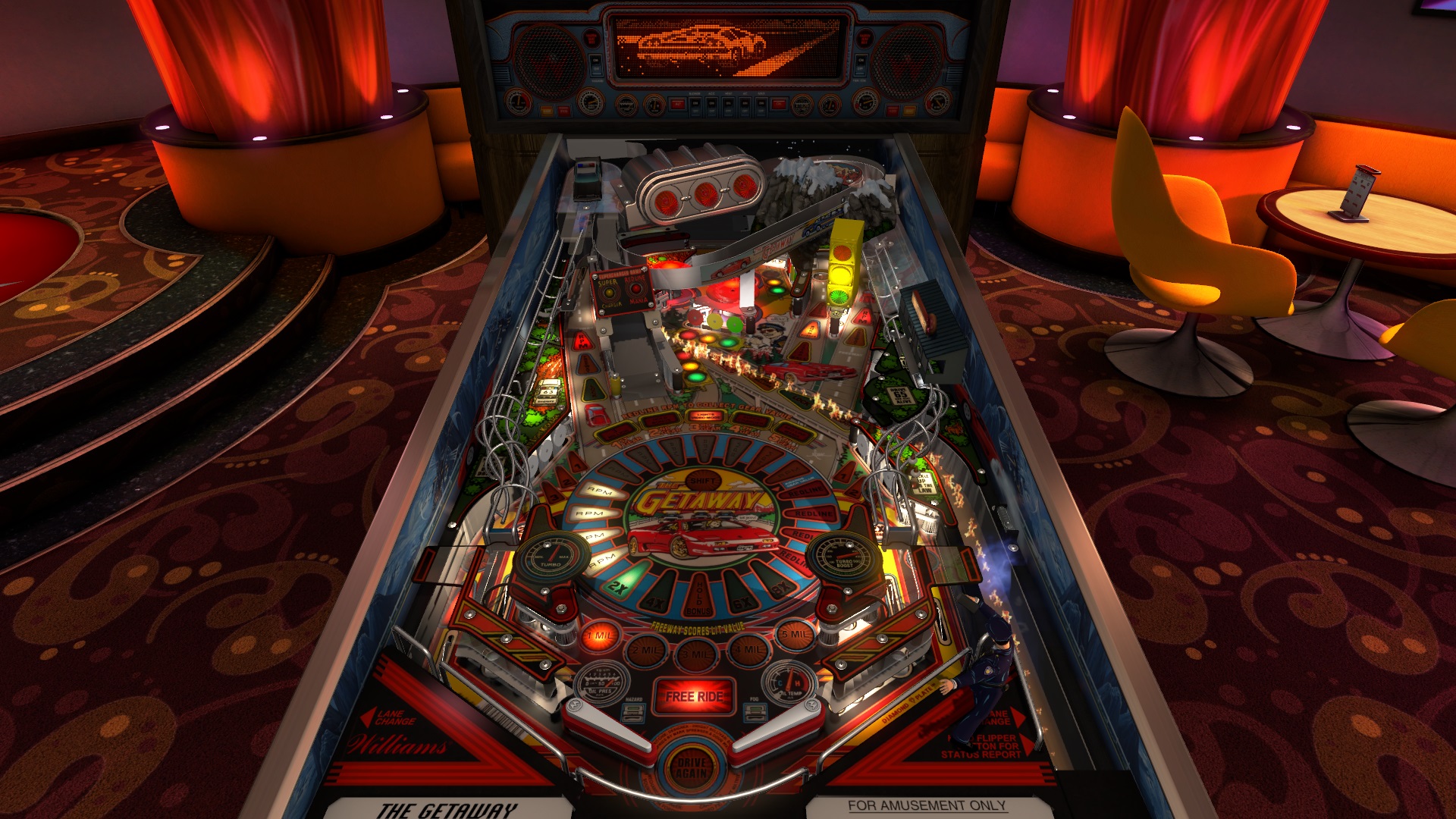 Now a bit of criticism, I guess, about FX3: The base game is “free” and it comes with a handful of tables. If you want all of the tables, you’re going to have to shell out about $300. Which is nuts. But you can get the Zen Core collection for $10 (and I recommend it) and that will give you Secrets of the Deep (a deep sea exploration table), Pasha (an Arabian Nights-themed table), Rome (one of my favorites), and Biolab (a really fun genetic engineering/Gremlins-adjacent themed table). These four tables have hours of fun in them and the package is easily worth $10. The Marvel Pinball Original Pack comes with Spider-Man, Iron Man, Blade, and Wolverine and those first two alone are worth the $10 price tag.

An actual complaint: The menu shows you *ALL* of the tables when you’re in there browsing what to play. This includes the ones you don’t have. “BUY THIS ONE!” the game is constantly screaming at you. I wish there were a way to only show the tables that you have… but, at the end of the day, that’s not *THAT* big of a deal. It is irritating as heck, though.

I’ve got a handful of tables in there on my wishlist and, hey, maybe they’ll go on sale someday. My rule of thumb is “would I shell out this many quarters for the game if it were down at the arcade?” and, if I would, well… I know I’d best pick it up. Because, dang, pinball was *AWESOME*. It’s good that the new modern video games haven’t abandoned it. Maybe even improved it.

(Featured image is a screenshot of the Spiderman Table)