An Ode to Pants, Recently Departed 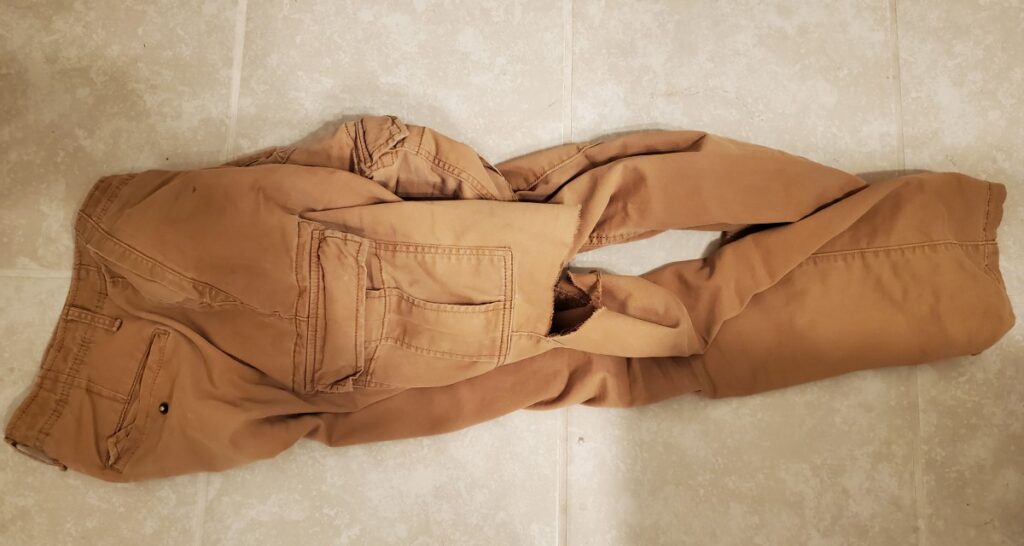 I come to mourn these here pants.

Thoreau wrote “On the death of a friend, we should consider that the fates through confidence have devolved on us the task of a double living, that we have henceforth to fulfill the promise of our friend’s life also, in our own, to the world.” Thus, here I be considering.

They were good pants. They were minding their own business yesterday, doing what they had always done in covering my lower half while remaining functional and comfortable, when a tragic MRI imaging truck accident ripped the life from them. The tech who had accidentally opened the door as I ascended the stairs, causing the corner of the swinging portal to tear an opening into the thigh of these pants, was dutifully horrified and apologetic. While it was mass produced material of ethically questionable labor from Bangladesh that physically tore, it was actually my heart that unraveled; frayed, ripped, and laid open and exposed like my far-too-white thigh now was. Professional til the end, they stayed and struggled on till I got home and took them off, the tear becoming worse until the seams on either side finally put a stop to it. Even mortally wounded, and surely knowing the end was near, these pants managed to prevent a Toobin situation and, other than a chilly fall day draft and a few stray looks, bore their final hours with remarkable utility.

No one appreciated these here pants as much as I did. I know this because of the 4 different markdown price tags that had ever descending prices when I plucked them from the discount rack. While the cynical and hard of heart would declare them unwanted, I prefer to believe providence and Walmart had a higher plan, and they were waiting for me. For the legal tender of four dollars plus sales tax you became mine, and served me well.

Fashionistas mocked you, their narrowminded and bigoted ignorance to the fact that good pants needed more than just four pockets, and the wisdom that if less is more just imagine how much more more could be. I must confess that you were…what’s the French haute couture word for this…oh yes, ugly. Your mass produced dye that was aspiring for a burnt orange but fell short into a sort of cocaine addled and faded tangerine may not have been pleasant on the eyes, or matching of any shirt known to man, or socially acceptable to the fashionistas, yet like The Dude, still these here pants did abide.

How now shall we mark the passing into history of such noble trousers, now departed?

Perhaps something epic, something so grand in it’s oratorical power that the entire tide of history changes because of the words uttered thusly:

Eh…that might be coming at it a tad high.

Lost friends on the journey to life isn’t new. Perhaps the Joad family had it right, that there ought be spoken words over the lost before traveling on: 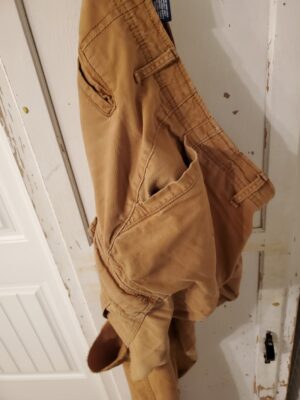 This here ol’ pair o’pants jus’ lived a life an’ just ripped out of it. I don’t know whether they was good or bad, but that don’t matter much. They was worn, an’ that’s what matters. An’ now they ain’t, an’ that don’t matter. Heard a fella tell a poem one time, an’ he says ‘All that lives is holy.’ Got to thinkin’, an’ purty soon it means more than the words says. An’ I woundn’ pray for a ol’ pair o’pants that’s ripped. They awright. They got a job to do, but it’s all laid out for’im an’ there’s on’y one way to do it. But us, we got a job to do, an’ they’s a thousan’ ways, an’ we don’ know which one to take. An’ if I was to pray, it’d be for the folks that don’ know which way to turn. Pair o’pants here, they got the easy straight. An’ now cover ‘im up and let’im get to the trash.

Seems too reverential to be honest. Perhaps something so simple in life should have simplicity in the afterlife. Perhaps a simple thank you will do. Perhaps after a few days some other pants will feel just as unnoticeably comfortable and functional. Life does go on, I suppose.

Perhaps a touch of class, like some John Gay:

Life’s a jest, and all things show it.
I thought so once, and now I know it.

Or, at least, until I once again find some pants on the discount rack. Dare to dream the impossible dream, but such dreams no matter how grand must be the same for all folks everywhere: put on one leg at a time.