The Unsung Hero of The Election Is Shyamala Gopalan Harris 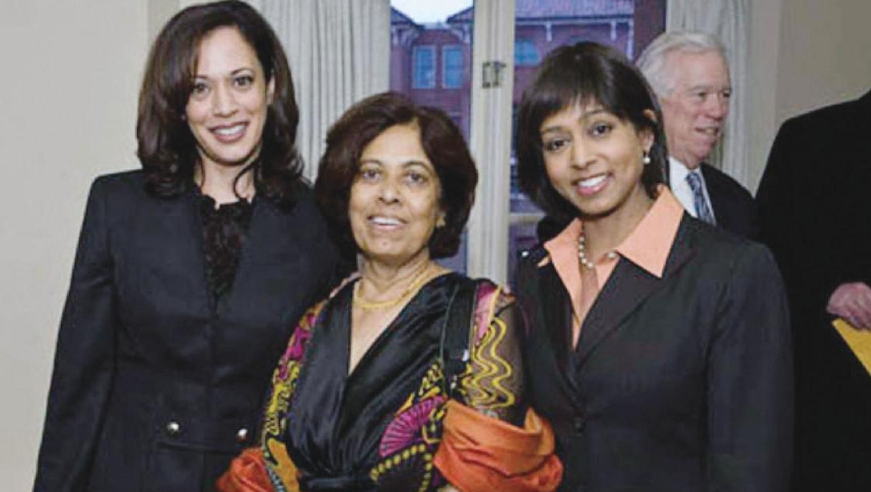 Shyamala Gopalan Harris, center, with her daughters Kamala and Maya

Vice President-Elect Kamala Harris spoke movingly about the role her mother, Shyamala Gopalan Harris, played in shaping her outlook and stoking the embers of courage from an early age. As much as I admire the Vice President-Elect, I would have to say the real hero of the speech and the unsung hero of the election is Shyamala.

We know the broad strokes of her life; we know she was born in the British-occupied subcontinent, on land that would not be officially free and recognized as India for another 9 years; we know she moved to the United States at the age of 19 to enroll in a Master’s program in nutrition and endocrinology at the University of California, Berkeley with the financial help of her parents’ savings; we know she met her husband, Donald Harris, at a meeting of the Afro American Association; and we know she took young daughters, buckled into their strollers, along to protests for civil rights.

You may have read the above paragraph and been impressed but I read the above and am astounded, jaw dropping at the farsightedness and courage of not just a young Shyamala but her parents, too. South Asia today is one of the worst places to be a woman; a survey conducted by the Thomson Reuters Foundation in 2018 ranked India as the world’s most dangerous country for women based on healthcare, discrimination, cultural traditions, sexual and non-sexual violence, and human trafficking indicators. To my non-surprise, Pakistan, a country I lived in from 2015 – 2016, ranked fifth. Go back to 1958, before women’s movements were underway, well before social media spread news of horror stories and organized protests and marches, and you can imagine the role of women shrinking even more. But not for Shyamala, and perhaps more notably, not for her parents, either.

When I moved from New York City to Washington, DC in 2010 for a position in the diplomatic world, I enjoyed my parents’ support in setting this precedent for our extended family. But I still recall the bitter words of the community based in New York City admonishing them for giving me this privilege and all their dire predictions for how it would end. In 1958, in the middle of India, the Gopalans ignored it and sent their girl abroad.

And when she went abroad, she wasn’t interested in being a wallflower, she was emboldened. Her work in the medical field would placate just about any South Asian parent, then and now. But perhaps because she came of age at a time of great turmoil in South Asia, perhaps because she knew her opportunities would simply never materialize for millions of people in her homeland, she was deliberate in actions to support civil rights. And she married a black man.

Here, too, I must share my own personal anecdotes. We are currently living in a glorious time that celebrates interracial marriages, because love is love is love.  But I must confess I have witnessed a shocking and shameful amount of racism within the South Asian community whenever there has been an instance of a young man or young woman marrying a Black person. It is deplorable and left me seething. I vividly recall witnessing several racist statements and slurs to the extent I made it sharply clear I was disgusted and exited the room. I wish I could say this was a generational gap, but it is not. This was in 2015. Shyamala was a half century earlier.

Her clarity of vision refused to dim. She made a conscious decision to raise her daughters with the frequent injections of courage, and the lesson that you must always stick up for others, even if they do not look like you at all. She was privileged in the sense she had access to funds and education, and used her gifts to further uplift others. With that kind of empowerment and love at home, the Vice President-Elect was almost guaranteed a life of success and confidence.

On Saturday, November 7th, 2020, a radiant, self-assured, and forward-thinking Kamala Harris spoke to the American people, the first woman (and of color!) to ascend to the heights she would soon command.  In her smile, I saw her grandparents’ support of her mother’s dreams. I saw her mother’s beliefs realized. The courage and grit that even made the moment possible began generations ago, and to me that is a wonderful reminder that in every struggle we encounter, there is a joy to be realized, even in some place or some time outside our own.

Saana Allie is one of those obnoxious New Yorkers. She left the best city in the world for Washington, DC where she pursued a career in diplomacy and national security. She is the founder of a women’s fashion brand, Saana Design Company, as well as founder, producer and host of the “Trendlines” podcast. She holds a Master’s Degree in International Relations and International Economics from Johns Hopkins University School of Advanced International Studies.