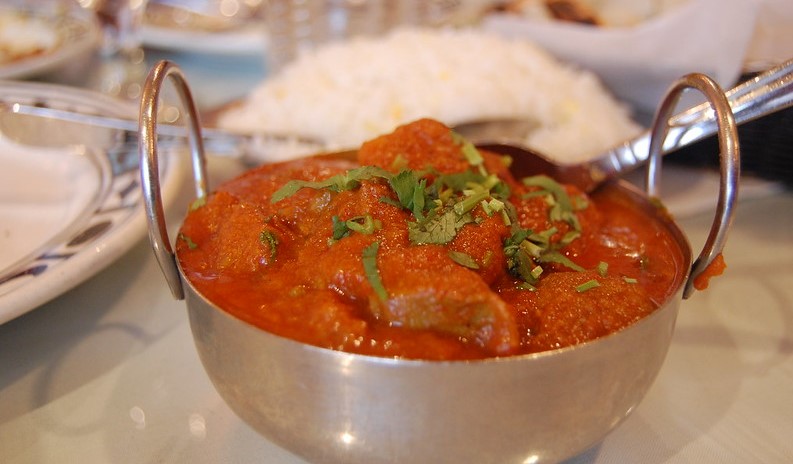 It’s really hard for me to pick the best meal I ever had or even narrow it down. There was the time as a kid I ate crab legs with my best friend (now sadly departed) until I felt like I couldn’t walk. There was the night in college where a friend’s mother shipped up crawfish from Louisiana and … well, those things don’t keep so you’ve got to eat them all.1 There was the banana split I had with my daughter to comfort her after she found out she’d have to keep hear ear tubes in for another six months. There was the night I spent in Iowa City with a three-star general and his staff having steaks, whiskey and cigars in quality and abundance that would make Roman Emperors weep2 while listening to the General expound some of the most profoundly insightful things about politics, history and warfare I’ve ever heard.

But there’s always one meal I return to: a lamb vindaloo in a random restaurant near our hotel in Christchurch, New Zealand.

I don’t have quite the same love affair with vindaloo as David Lister does, but it’s close. Up until graduate school, I was a notoriously picky eater. A common occurrence at the family dinner table was for me to refuse to eat something, my father to decree I would not leave the table until I did and for me to subsequently sit at the table for hours still refusing to eat it. But that changed in grad school because 1) I grew up; 2) I didn’t have enough money to afford to be picky; 3) when I did have money, I was going out with the other graduate students who had a broader palette than I did. I’m not sure when my preference for the spicier kinds of food emerged, but I quickly developed a reputation for looking up and down the menu for whatever had the most peppers next to it. And it was in my second year of graduate school when one of my fellow grads persuaded me to try vindaloo.

I was entranced. Lamb is not a dish that very common in the US. We prefer our beef, chicken and pork. But prepared properly, it has a flavor and a tenderness that is unrivaled, one of the reasons I now favor it as my Passover meal. Now combine that with a sauce that is both delicious and extremely spicy, throw in a few cubed potatoes and you’ve got a winner.

The dish is notorious for its heat, although I would argue that a dish that is pure heat has been made wrong. It should be spicy and flavorful. Done right, the heat enhances the experience rather than becoming a pain one must endure (fun as that can be).

The restaurant in Charlottesville served vindaloo as medium, hot or “Indian hot”. This isn’t actually normal because you can’t generally dial spice levels up and down that way in a proper recipe. I started mild and moved onto hot. I tried Indian hot once, but it was so spicy, I felt like I could see through time. And I could feel that spicy meal moving through my digestive system.

But when I moved onto Baltimore, I found better restaurants that just had one heat setting because … you make vindaloo the way you make it. There can be a lot of variation in flavor and heat between restaurants. But dialing the heat or up or down should not be an option because you’re changing (or eliminating) the flavor.

Years later, I would visit a curry shop in Guildford, England and ask for the vindaloo. The waiters, hearing my American accent and taking in my pale jet-lagged form, gently suggested a milder dish, similar in flavor but not quite as spicy. I stuck to the vindaloo. After it was served, I could see them occasionally poking their heads out of the kitchen to make sure I hadn’t exploded. But it was glorious: just the right amount of spice to wake up my soul without killing my palate.3

That brings me to New Zealand.

My wife is Australian and, in 2004, we went to visit her family with a week-long stay in New Zealand on the way down. This was just after The Lord of the Rings trilogy had come out and tourism was booming. Every place in New Zealand was trying to cash in on the Tolkien craze. New Zealand is always a great place to visit but the tie-in to one my favorite books and movies ever made it extra special. We found a guidebook and spent some happy hours finding the locations where things had been shot. This was before we had smartphones so we couldn’t use GPS. We had to wander around until the landscape looked familiar. One of my favorite finds was the field where Sam, Frodo and Gollum first see the Mumakil. The scene is framed perfectly so that you can’t see the carpark just a few degrees to left. Another was visiting Mount Ruapehu, which had stood in for Mount Doom. We had been talking about getting married and I’d joked with the future wife that I’d propose on Mount Doom. I could see, on the way up, that she was nervous I would actually do so.

We eventually found our way down to Christchurch, a small but wonderful town on the South Island. We arrived somewhat late4 and were starving. The hotel staff recommended a small Indian restaurant around the corner. I, as usual, ordered the vindaloo.

The vindaloo was a bit creamier than I usually prefer. But the spice level was absolutely perfect, a balance I have only ever found in England’s curry shops. But what made it the best vindaloo I ever had was the lamb. Lamb aficionados know that the best stuff comes from New Zealand. If you ever visit, you’ll instantly know why. New Zealand is sparsely inhabited and has mild weather. It literally has more sheep than people. And those sheep are set loose in the vast open spaces to graze. For generations, Kiwis have perfected sheep husbandry to the point where their sheep are hale, healthy, well-nourished, well-kept and happy. They take lamb and mutton very seriously and it shows.

But as good as New Zealand lamb is, they seem to save the best of the best for themselves. Every lamb meal I had there was delicious and amazingly tender. And this vindaloo almost melted in your mouth, it was so good. The combination of spice and meat made me feel like Agent Sands in Once Upon a Time in Mexico, having found the perfect puerco pibil. Only instead of shooting the cook, I wanted to embrace him (or her).

I have no idea what the restaurant’s name was. It may not even exist anymore. But I think of the words of Ratatouille’s Anton Ego:

I have made no secret of my disdain for Chef Gusteau’s famous motto: “Anyone can cook.” But I realize, only now do I truly understand what he meant. Not everyone can become a great artist, but a great artist can come from anywhere.

I could write a dozen articles on this subject. Maybe the Christchurch Vindaloo — and yes, I will capitalize it like a historical event — wasn’t the best meal I ever had. But it’s in the conversation. And it’s a reminder that a great meal can from anywhere and when you least expect it. Even at the only open restaurant in the city on the edge of Middle Earth after an exhausting day of trekking with your future bride.