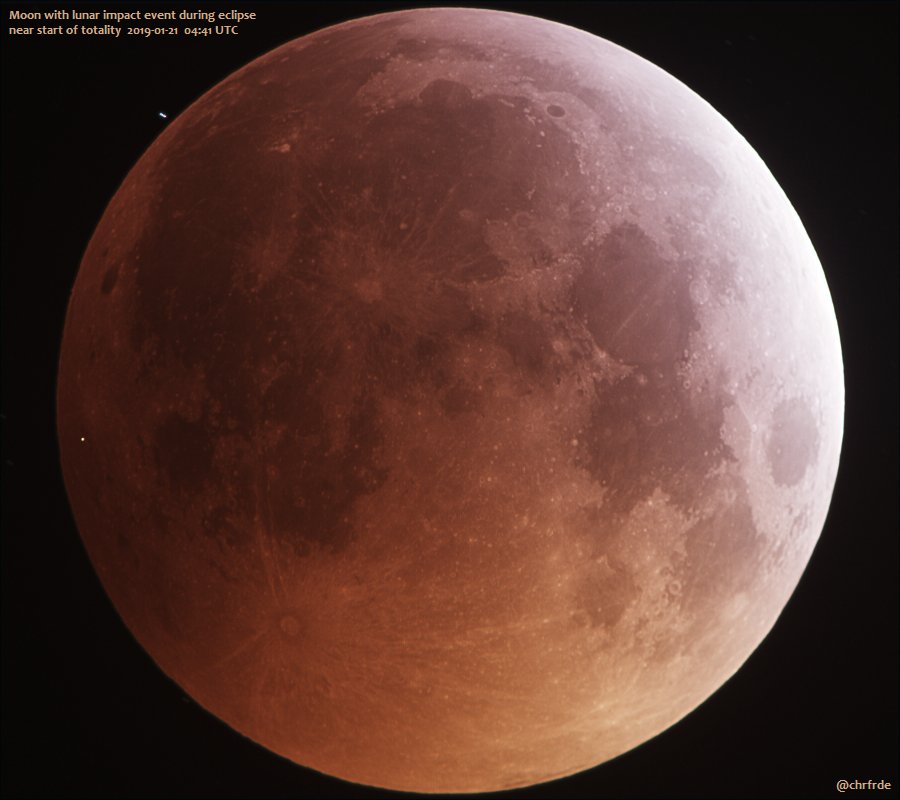 The “blood moon” eclipse as photographed by Christian Fröschlin

[ThTh1] The big announcement in the last couple of weeks was the discovery of water on the surface of the moon. There has been speculation before that ice water might be found in permanently darkened craters toward the lunar poles. The discovery that the sunlit surface of the moon has water within it — albeit at a moisture level a hundredth that of the Sahara — was unexpected. It was assumed that harsh sunlight over 14-hour days would boil it off.

It’s not clear what this may mean for future exploration, especially the establishment of a permanent base. Nor is it clear what the implications may be for helium mining on the moon in service of nuclear fusion. But is an interesting revelation and a reminder that our understanding of even our nearest neighbor is incomplete.

[ThTh2] The analysis keeps coming back with the same answer: planets and even Earth-like planets may be very common in our Galaxy.

[ThTh3] Fast radio bursts are one of the big remaining mysteries in astronomy. We might get some more clues now that we’ve discovered one inside our own Galaxy.

[ThTh5] Speaking of gravitational radiation … I did a thread the other night about binary pulsars — their nature, their discovery and what they tell us.

[ThTh8] A few weeks ago, I wrote about the detection of phosphine on Venus, which might, among a number of other possibilities, have its origins in organic life. Three studies have now looked further and not found the signature of that element. The scientists are now re-evaluating their data to see if this was a calibration issue. One of the great things about science is that we try to confirm discoveries. In this case, it will be disappointing to show that the discovery was in error. But that’s part of the job.