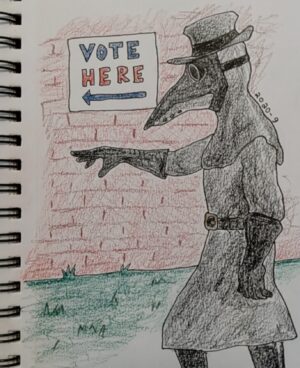 How the candidates are spending Election Day:

President Trump and Democratic nominee Joe Biden will watch results come in on Tuesday night in markedly different ways that sum up how the two candidates have approached campaigning during a pandemic the last several months.

Trump is expected to remain at the White House on Tuesday, culminating in a campaign party where hundreds of guests are likely to be in attendance. Biden, meanwhile, will make a final pitch to voters in Pennsylvania before taking in the results in his home state of Delaware. He is scheduled to deliver remarks from Wilmington, joined only by family and a small cadre of supporters.

The president’s schedule has him remaining in Washington, D.C., on Election Day after a furious close to the campaign that saw him hold 14 rallies in the last three days. Trump initially hoped to hold a large party at his downtown hotel alongside family, staff and supporters, but the idea was quashed by local restrictions on large gatherings meant to slow the spread of the coronavirus. Instead, he will call into “Fox & Friends” in the morning followed by a visit to his campaign offices in nearby Arlington, Va., to meet with staff. Hundreds of guests are expected to file into the White House in the evening.

“The president is very excited to watch election results from the White House, which only an incumbent president gets to do. He’s energetic. He feels the momentum. For a lot of us this feels very similar to 2016,” White House communications director Alyssa Farah said on Fox News. While most, if not all guests who attend Tuesday night will be tested for the coronavirus, the administration has taken a lax approach to enforcing the use of face masks or social distancing amid the pandemic. That attitude was unchanged even after Trump and several of his top aides contracted the virus.

Biden, meanwhile, will use the first half of Election Day to try to turn out any last minute undecided voters in the crucial swing state of Pennsylvania, the third straight day the Democratic nominee will hold events there. The former vice president will hold voter mobilization events in his childhood hometown of Scranton and Philadelphia. Biden’s team has been tight-lipped about what exactly he will do once results start coming in, however, other than to say Biden will address the nation at some point on Tuesday night.

A stage with large video boards was being built outside the Chase Center in Wilmington, Del., on Monday, the same site where Biden delivered a speech in August accepting the Democratic Party’s nomination. Biden will be joined on Tuesday night by his wife, running mate Sen. Kamala Harris (D-Calif.) and her spouse. Other than that, the crowd will likely be limited to family, staff and members of the media.

After weeks of record-breaking participation in early and mail voting in dozens of states, one critical question remains on the eve of the 2020 presidential election: Who is left to vote?

More than 98 million Americans had cast ballots by Monday evening, an astonishing figure equal to about 70 percent of the total turnout four years ago — leaving election officials, the campaigns and the public overall wondering how heavy voting traffic would be on Tuesday.

While at least three states — Texas, Hawaii and Montana — exceeded their total 2016 turnout with early and mail voting this year, other states have seen lower turnout that could foretell heavier Election Day traffic. Among battlegrounds, Pennsylvania had reached only about 40 percent of its 2016 levels by Monday, Ohio had hit 60 percent, and Michigan was also at 60 percent.

And of course, plenty of drama on the ground:

More than 100 million Americans cast their ballots before polls opened Tuesday, shattering records and likely reducing the number of people who will turn out to vote in person this year.

But the threat remains for issues to arise, from the routine Election Day headaches — such as long lines and voting machines malfunctioning — to uniquely 2020 problems, including the threat that the coronavirus pandemic poses to voters and poll workers alike and the heightened fears law enforcement and elections officials have about intimidation and conflict occurring at the polls.

Even as record numbers of Americans have voted early, voting rights groups say they are bracing for the possibility of long lines on Election Day after officials shuttered polling places because of the pandemic and potential confusion over many states’ new voting processes this election.

Election Day also is expected to bring thousands of partisan poll watchers into balloting locations, the result of a stepped-up effort by President Donald Trump’s campaign and the Republican National Committee to deploy legions of volunteers to look for any voting abnormalities. Democratic poll watchers will be on hand as well.