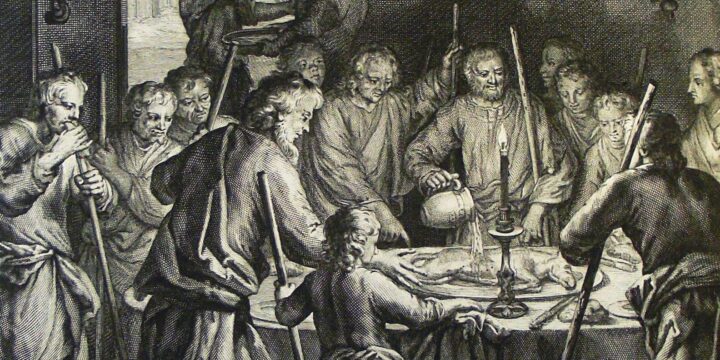 Traditional Jews – and Christians who had a religious education – all know the basics of the Exodus: 70 Jews ventured south to Egypt during a famine, they grew quite numerous there over time, and Pharaoh was worried they might become a fifth-column, so he enslaved and oppressed them. They cried out to G-d who made an example of Pharaoh with 10 plagues (one for each time he refused to free them, with the last one striking the firstborn of every Egyptian family) that devastated Egypt, Pharaoh finally relented and, gave the order to free them on the night of the 15th of Nisan. The Jews left the next day in such a hurry that their dough didn’t have time to finish rising and they were commanded by G-d to commemorate that day forever. If you don’t mind skipping to the end, the climax is in Exodus 12.

Other meals have their traditional appetizers, entrées and side dishes, of course. Fancier ones might even have an intermezzo to cleanse the palate. For example, Thanksgiving at our house is a serious and solemn family affair, replete with a whole turkey and all the trimmings, a cornucopia of greater and lesser elements, and a good bottle of wine to mark the occasion. We try to steer the conversation to American history and the gratitude that we Jews feel to the most hospitable country we have known in 20 centuries.

Turkey – the quintessential New World fowl – is an ideal main dish, and we prepare it simply, but with a rich gravy (starting with reduced pan drippings, thickened with a roux, and rendered more festive with copious amounts of Chardonnay), and an orchestra of sides. There’s cranberry sauce (both fresh and canned, to satisfy all palates) for contrast, potatoes (roasted and mashed, as well as sweet potatoes in another homage to the bewildering bounty of the Americas) for sufficient ballast to ensure everyone sleeps off their tryptophan binge smoothly. One year I worked sage, thyme and roasted garlic into the bread I baked. As our table has gotten more crowded, so has the menu, but the atmosphere is one of merriment, gratitude and the general conviviality of a family gathering, enjoying the harmony between the ingredients and the locale (e.g. sushi, banh mi sandwiches and pho, or chicken tikka masala would all seem out of place), with conversation pleasantly lubricated by fruits of both the vine and the grain.

On March 11th, 1946, David Ben Gurion (who would go on to become Israel’s first Prime Minister) testified before the Anglo-American Committee of Inquiry, a joint US-UK panel to develop recommendations for how to handle the land what was called Palestine at the time, as well as the Jews and Arabs who lived there. His testimony is worth reading in its entirety, if only because it serves as a stark contrast coming from someone who was himself not conventionally observant but whose Jewishness emanated from very bottom of his heart. But it also limned a fascinating parallel that resonates with me:

“…A man can change many things, even his religion, even his wife, even his name. There is one thing which a man cannot change, his parents. There is no means of changing that. The parents of our people is this country. It is unique, but it is there.

More than 300 years ago a ship by the name of the Mayflower left Plymouth for the New World. It was a great event in American and English history. I wonder how many Englishmen or how many Americans know exactly the date when that ship left Plymouth, how many people were on the ship, and what was the kind of bread that people ate when they left Plymouth.

Well, more than 3,300 years ago the Jews left Egypt. It was more than 3,000 years ago and every Jew in the world knows exactly the date when we left. It was on the 15th of Nisan. The bread they ate was matzoth. Up to date all the Jews throughout the world on the 15th of Nisan eat the same matzoth, in America, in Russia, and tell the story of the exile from Egypt and tell what happened, all the sufferings that happened to the Jews since they went into exile…”

But in designating a “best meal” I keep coming back to our annual Passover Seder. There are some fascinating details about this meal that most people – even attendees – miss. For example, the lamb has to be roasted on an open flame, rotisserie-style, and only on certain types of wood. It is meant to be eaten by a household (or more than one, to ensure that it is entirely consumed), it cannot be eaten raw, we may not break any bones in consuming it and it is to be the last thing we eat on that night. Generations later, the practice of eating while reclining was adopted, and was universally adopted and ratified by Rabbinic leaders, securing its place in Jewish law – and practice – ever since1. Today we skip the open-pit roasting (lest it appear that we’re performing sacrificial rites outside the confines of the Temple), but retain the rest of the rules.

What emerges from a careful examination of these laws – laws that are unique to this one meal on the Jewish calendar – is that this Paschal lamb is more than just a menu item. It is prepared in the most primitive of methods – roasted on an open flame with no tools or accouterments – but consumed the way that the nobility would dine centuries later, thus recalling at once the poverty of subjugation and the glory of liberation. Moreover, the other menu items – four glasses of wine to mark each divine promise of redemption, the matzah to remind us of the haste of the exodus itself, the bitter herbs to recall the misery of the enslavement, the Haroseth to commemorate the tortuous labor – are all deliberately included to evoke memories of that national experience. In fact, near the end of that chapter, Moses elaborates in his conveyance of G-d’s command (Exodus 12:26-27):

“And when your children ask you, ‘What do you mean by this rite?’ you shall say, ‘It is the Passover sacrifice to the Lord, because He passed over the houses of the Israelites in Egypt when he smote the Egyptians, but saved our homes…’”

So not only does this meal have a very specific menu that we are exhorted to observe, but there is an additional dimension: intergenerational discussion and transmission of its meaning. We are commanded to use the meal as an educational vehicle to impart our values to our kids. There are numerous examples of ways we coax and inspire children to ask questions about why and how this night differs from all others, all to make as indelible an impression on the next generation as we can.

Obviously, none of this works if a child’s religious instruction is limited to this one evening per year. The Seder experience is meant to be more of a punctuation or summation of what it means to be Jewish and why it’s important. Jewish education is an expensive commitment. Our parents sacrificed inordinately to ensure they got the finest one available and we, in turn, do the same for our children.

We take Thanksgiving seriously, too, and for many of the same reasons. As a bookend to the Passover story, our Thanksgiving narrative begins with 23 Jews who braved the journey to New Amsterdam in 1654 from Recife, Brazil, collateral damage of the Dutch surrender to Portugal in January of that year. Jews have been here ever since, settling, trading, investing, building, farming, teaching, and serving in what has become the most hospitable home country Jews have known since the Romans destroyed the Temple in Jerusalem just over 1,950 years ago.

The unifying thread between these two meals is gratitude. The Hebrew word for “Jew” is actually derived from the word for gratitude2. To be Jewish means to acknowledge the overwhelming impossibility of surviving and enduring as a nation without divine providence. Passover commemorates our becoming a people and Thanksgiving commemorates our joining this great nation. But the story begins with Passover and that dinner that we celebrate every year. Watching my kids engage with this dramatic illustration of Jewish identity and embrace it, kindles an indescribable warmth in us as parents. We see kids becoming observant Jews and proud Americans, who take serious things seriously and who understand what this means and why it matters. These are kids we will be able to set loose on the world ready to make it a better place, and watching this unfold more every year at our Seder makes it our best meal ever, several years running.