Fiction: Ghost of a Hundred Miles Too Late 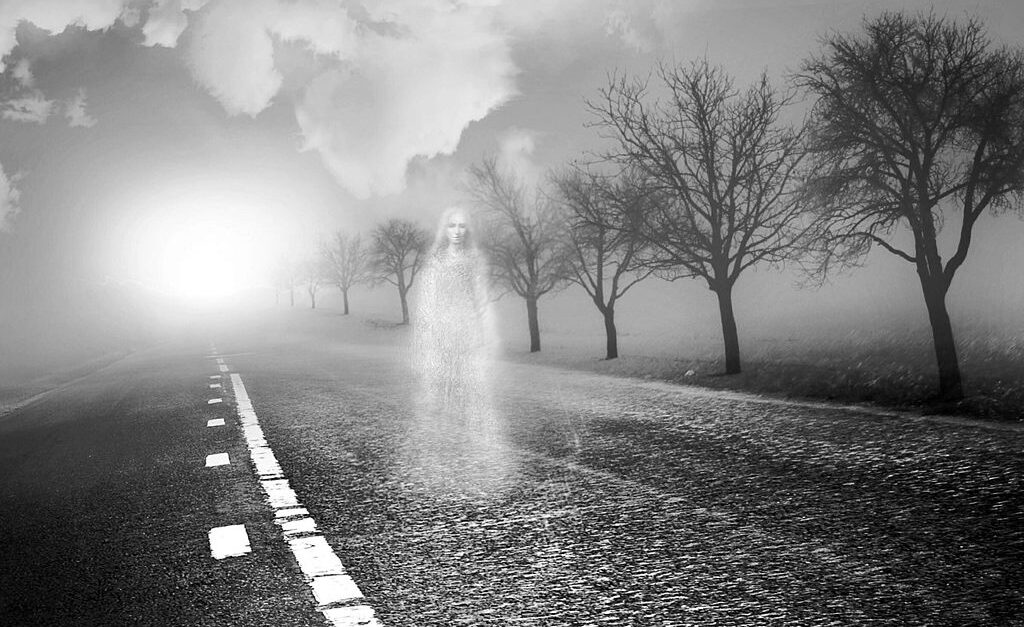 I gazed upon the empty street from my apartment window, a plastic water bottle half-empty in my hand. It was sunny out, and the sparse clouds made the sky seem particularly distant. How much further away, then, must God’s Heaven be, from whence He watches? I shook my head, and turned to gather my bag from its place in the entryway, watched over by a faded photograph, the last of my grandmother. It was time to answer a call.

For all the sun, it was cold out – or what passes for it in the Sonoran desert. The dryness of the morning air cut, but at least it only cut, not caressing my bones like the marine mists of my native Seattle. The demands of the day shook me from my fugue, as the blue-uniformed officer waved me into the squat brick dwelling before me. The call had brought me to a part of town time had left behind, past attempts at gentrification having broken upon the reef of particularly prickly neighborhood zoning rules. And so came to exist a run-down suburb still too pricey to buy a house in.

At first blush, it seemed straightforward – a pristine house, marred only by the blood of the three bodies that had met their end in one of the bedrooms. Two children arranged carefully, even peacefully, empty eyes closed, dressed post-mortem in clean clothes, arms folded. The eldest, holding a framed photograph, showing three children, and two proud parents. Beside them, slumped forward in a chair, a woman, untouched but for the powder burn on her chin and the blood on the wall, an ancient revolver dangling from one smooth and swollen hand. A short conversation with the responding officer later, I’d learned a bit more of the story.

This unfortunate woman was made a widow some months ago by a car crash, had lost her husband and daughter. However, until one of the neighbors heard the shots, things seemed to be improving. The family had been seeing a therapist, the neighbors said, and hadn’t the remaining son just begun to come by again to play? He seemed happy, not wholly bound by the sad events of the previous spring. Adjusting, in other words, as one must, to the grief and changes brought by life, and unconsumed. And the mother – hadn’t she brought brownies just the other week to the PTA meeting? She seemed well, no longer shaken as she’d been in the first months. What a shame; they were nice folk, friendly. What a shame. What a shame.

A cursory search of the kitchen, smelling faintly of chilies and fat, revealed a drawer with a bill – paid, for a therapist downtown. A dead end – for now, because although this was a murder case as well as a suicide, the therapist would likely be unwilling to talk without a court order. It was a few months old, anyway – I wondered if they’d been since? This was, after all, on top of the stack. But next to it, something a little more promising: An advertisement for a den of memory, a company that promises to give a bit of closure, a few more minutes with a loved one – but purely through virtual reality, an odd kind of grief counselling. I decided I should go, and find out if the woman had been through recently – just to be safe. In the next room, I could hear someone replaying a tape of the earlier interviews. It was so sudden. What a shame. How sad. We knew they had had a hard time, but we thought it was getting better. Why?

As I drove, I once again found myself lost in thought. The case seemed cut and dried – especially with the careful placement of the photograph. An insanity of grief, nothing more. There was a lot of paperwork waiting for me at the office. The lack of a note – but many suicides have no note, far more than people assume, though it is perhaps more rare in cases like this. But if things were getting better, why? What changed? Humans are deeply irrational, but they aren’t entirely unpredictable.

The address on the brochure pointed to a nondescript office building, grey, three stories. Only a few cars remained in the parking lot; the directory overflowed with blank nameplates. A dentist and an accountant still occupied parts of the first floor past the small lobby, and the third held the clinic I sought. The elevator, a few feet past the directory sign, was hung with an ‘Out Of Order’ sign. Judging from the dust on top of the pole holding the sign up, it’d been months. It seemed not a lot of people with wheelchairs came by. I checked the unmarked door next to the elevator, and climbed the stairs inside.

The office was painted in a blandly peaceful shade of tan, and a wall-mounted fountain burbled quietly to itself. It reminded me, more than anything, of a chiropractor’s office, or perhaps a high end physical therapist. However, it did diverge in one important way: There was no desk, no receptionist, only a white plain door on the far side of the room. I knocked, to no answer, and after a few minutes sat on the predictable couch and scanned the magazines upon the table.

Some ten minutes later, I stood to leave. The door opened. In it, stood a woman, holding a clipboard. She welcomed me, asked my name, the reason for my visit. She explained that they specialize in an experimental therapy – putting people in touch with a simulation of their lost loved ones, built using the latest AI technology. A way of getting closure, when closure is not possible. A way to give a final apology, or just hear a loved one once more, and say goodbye. But it is also built around the imprints of personalities, built from the writings, postings, myriad words and thoughts we leave today in our modern society in public.

“It’s a shame, what you say happened – she was in not too long ago! Do you want to see what she saw?” I agreed – what was the harm? Perhaps I’d learn something – and was led to another beige room, dominated by a facade of white medical plastic. A man in a white lab coat greeted me warmly, told me to change into a swimsuit, provided, no charge for an investigator. They placed me in a pod, full of warm water, sensors upon my limbs, and gave me a mask – a headset, a portal into a virtual reality. As I floated upright, disembodied, the edges of my skin dissolving into the water, they began the simulation.

But it was not the woman. Not her husband. My grandmother, puttering in the kitchen, where she taught me how to cook. Moving, cleaning, creating, like I remembered her years before, before she passed in the night, as I drove a hundred miles, a hundred miles too late. And she turned towards me, noticed me, floating. And she said, in a voice distorted by an old camcorder,

Born in Seattle to an immigrant family, adopted by cats, long-distance driver (for fun), techpriest (for pay), and jack-of-all-trades. Massive nerd and collector of useless information. You can usually find him under a pile of cables, or on Twitter @nog_ad