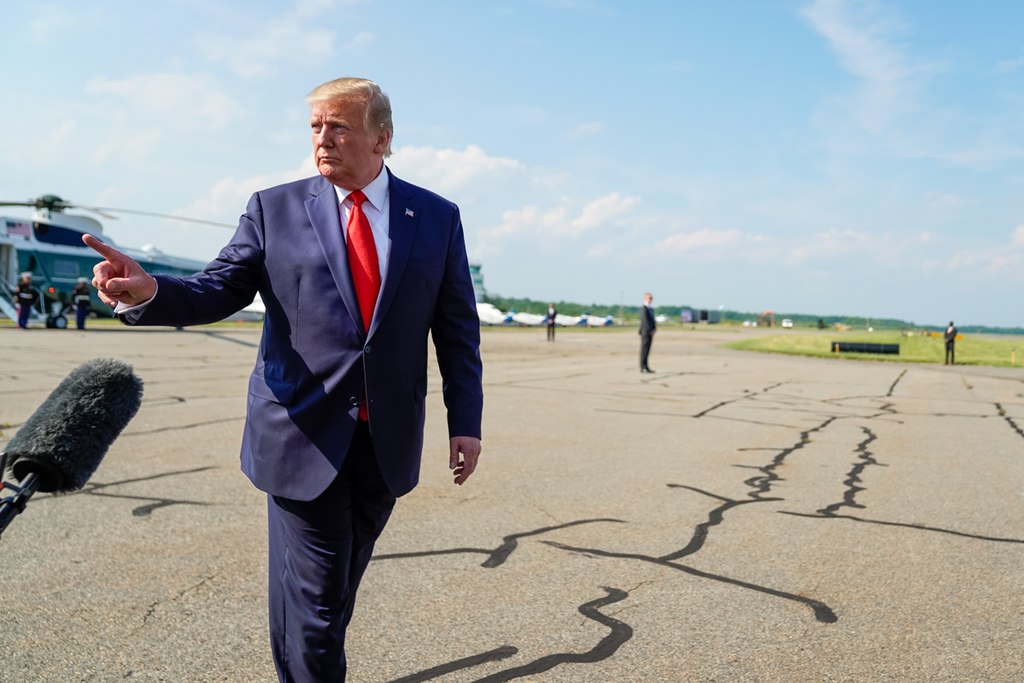 President Donald J. Trump speaks to reporters Sunday, July 7, 2019, as he prepares to board Air Force One at the Morristown Municipal Airport in Morristown, N.J., for his return to Washington, D.C. (Official White House Photo by Shealah Craighead) 7 July 2019

President Donald Trump has some odd notions about exercise.

The man who claimed, through his doctor, to be the “healthiest individual ever elected to the presidency” and mocked his opponents as “low energy” and “sleepy” doesn’t disguise his disdain for unnecessary physical exertion. He believes that human beings are born with a finite amount of life force, and that to squander it is foolhardy. He is the first president since Ronald Reagan to avoid jogging.

Nevertheless, to keep his crowds pumped, his campaign has repeatedly used the most famous anthem to working out in the history of music — the Village People’s “YMCA.” Trump himself can often be seen boogying to the 40-year-old tunes at the end of his rallies, apparently unworried that a few dance moves could tap his final reserves.

This attracted a few online double-takes. Could the messiah to the Religious Right and running mate of Mike Pence really be a fan of the most flamboyantly gay band to outlive the disco era?

Of course, mixed messages about American ideals of masculinity have always been part of the People’s appeal. It’s how music targeted to Greenwich Village’s late-70s queer community ended up becoming a staple at sporting events around the world.

There are, after all, many ways to have a good time.

The actual Young Men’s Christian Association did not object to the song, which led to a surge in popularity for their facilities. The U.S. Navy let the band film the music video for “In the Navy” on the USS Reasoner, in return for the song’s use in recruiting campaigns. The band members themselves seem to disagree about the true meaning of “YMCA,” with lead singer Victor Willis once threatening to sue anyone claiming it was about gym sex.

Gay men and woman have long gleefully embraced camp as a way to subvert and lambast social norms that denied their own existence. But there’s another side of the aesthetic–we’ll call it kitsch, though Susan Sontag would object to this oversimplification–that celebrates unironically embracing the surface-level and willfully ignoring what’s underneath.

Even if you can keep images of mustachioed dancing cops and cowboys out of your head, for Trump to rock to songs with lyrics like “Every man wants to be a macho macho man / To have the kind of body, always in demand” after needling his opponent’s lack of vim and vigor seems too on-the-nose, even for him. But true Trumpologists know that being purposefully, preposterously, unapologetically on-the-nose is the essence of Trumpism. Other candidates are happy to imply they have the necessary testosterone to lead the nation, while Trump prefers to blare this from a bullhorn. And brag about his penis size, just to make sure you got it.

He reportedly spends hours studying his TV image and ensuring it projects his preferred image of strength–whether through too-long ties, cape-like suit jackets that flap in the breeze or the bright gold sheen where a bald spot should be.

His campaign’s penchant for dramatic backdrops and Jerry Bruckheimer-style montages is only matched by the creativity of his supporters themselves, who draw and buy murals of Trump alongside tanks, eagles and explosions.

Trump has built monuments to kitsch throughout his career, and it’s been key to his meteoric political rise ever since he donned his first Times New Roman-fonted MAGA hat.

For those who see in Trump the impulses, if not the conviction, of a 20th-century authoritarian strongman, it’s also a troubling similarity. Because kitsch has a history far uglier than the gaudy colors it inspires today.

In the acclaimed novel “The Unbearable Lightness of Being,” Czech writer Milan Kundera elaborated on what he termed the “totalitarian kitsch” of the Soviet Union–the Socialist “realist” movement that portrayed Russia as a flawless idyllic countryside filled with happy warrior-citizens.

Kitsch aims to exclude “everything from its purview which is essentially unacceptable in human existence,” Kundera stated. The idea was best exemplified by the USSR’s iconic May Day parades, where “even the most blasé faces would beam with dazzling smiles, as if trying to prove they were properly joyful.”

Bad taste is a sort of artistic brute force that can crowd out and annihilate all doubts, nuances and ironies, and impose in their place powerful, yet self-aware, earnestness. Propagandists have learned over the decades that it can be an effective tool for creating resilient public perceptions.

“There is a kitsch attitude. Kitsch behavior,” Kundera later wrote. “It is the need to gaze into the mirror of the beautifying lie and to be moved to tears of gratification at one’s own reflection.”

Trump’s kitsch obliterates all notions of weakness or vulnerability. Like a pro wrestler, his fans appreciate the artificial extravagance while feeling honestly empowered.

When I talk to foreigners about Trump, they often ask, “Is it an act?”

I know many of his supporters believe so—they assured me in 2016 that he was a businessman, shrewdly putting on a show. They saw truth-telling but also performance.

Those contradictions are at the heart of Trumpism—the new political language that he seemingly improvised four years ago to captivate his voter base. Kitsch creates a kind of neutral zone around Trump, a silliness sphere. Whichever side you fall on, being wise to the joke is something he’s prepared for.

And his political fortunes have apparently turned not because the country has experienced some epiphany, but because he’s finally facing a foe removed from humor entirely — that can’t be mocked, distorted, bullied or laughed away.

Unlike most humans, a virus means exactly what it says.

Alex Parker is a policy writer in Washington, D.C. with 15 years of journalism experience.