Weekend Plans Post: Participating In An Event Without Knowing About It

A million years ago, the cable channel Spike! had a show called “Oblivious”. It was a hidden camera show. The host would wear a disguise (for example: a florist) and a customer would come up wanting to engage in commerce (for example: buy flowers), the host would then ask him or her several trivia questions, and then, at the end of the questioning, give the person cash based on how many of the trivia questions they got right. “Oblivious! The Game Show You Don’t Know You’re On!”

It was a decent enough concept, I guess. It didn’t really take off.

Anyway, last Friday, I had finished work by 2PM and it was cold. Like, really cold. I was tempted to not run but my boss said “WE’RE RUNNING!” and so I put on my shorts and hoodie and got ready to run a nice 5K in the late-October air. It was juuuuust cold enough for the first minute or two to be unpleasant, but after that, everything was fine. My core was warm, my hands were warm, my feet were warm. Who cares if my knees were chilly?

We got a good time this time. 52 minutes! The cold pushed us, I guess.

Anyway, he pulled ahead in the last two minutes and really turned on the gas and I was just fine keeping my normal snail’s pace and he went to his car and then ran back to the finish point with some weird… object? In his hand? And as I passed the little fence post we use to mark the end, he handed me a CU Boulder Virtual 5K medal.

Apparently, he had enrolled me in the Boulder Virtual 5K without my knowledge.

So I got a medal for a 5K I didn’t know I was running. 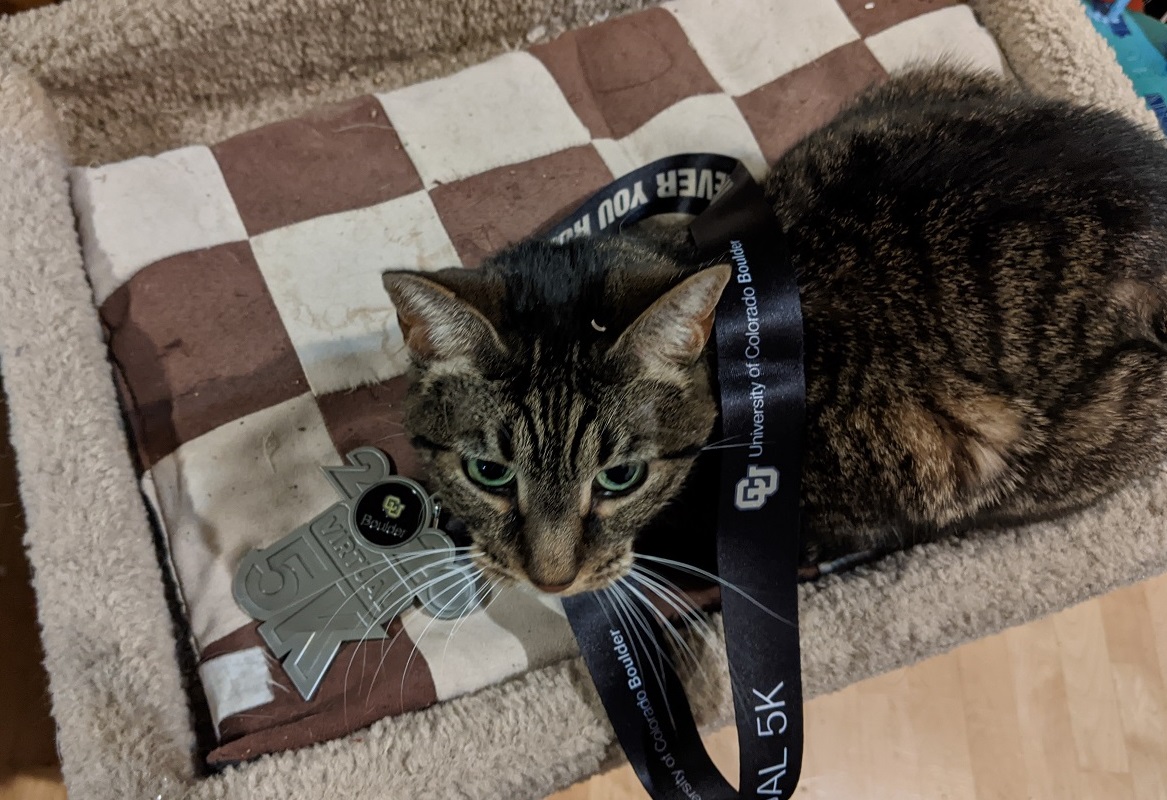 I’m still tickled pink about it.

This weekend has no events. Well, no events to my knowledge. Maybe somebody will sign me up for something without my knowing about it again.

No grocery stores, no visits to Costco, no trips to PetSmart. Just chores and errands around the house, maybe do the banking, maybe have some foodstuffs delivered. Maybe play some games.