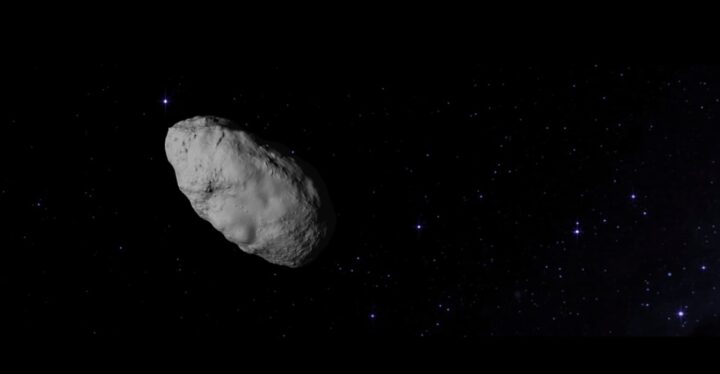 OSIRIS-REx launched in September of 2016 and reached Bennu in 2018. It spent the first two years of the mission entering orbit and collecting data.  Included in the data was a LIDAR sensor giving us billions of measurements for the first 3D lidar map of a near-Earth Asteroid. There is also a visible camera among other instruments that have helped in our understanding of the body.  The main goal of the first two years was to prepare for a sample return. The goal of a sample return is exactly what it means, collect a little bit of material from the asteroid and send it back to early. One of the early highlights of the mission was the identification that carbonate minerals may make up some of the geology. of carbon-bearing material across the surface. These carbonate minerals often form in hydrothermal systems, which means that Bennu’s parent body might have been wet.

Bennu is know as a “Rubble-Pile” which means that it is made of lots of pieces of rock that are compressed together, basically it never got hot enough to melt the rock and reform, which makes it a very interesting target to study the formation of the solar system. It is a mid-sized asteroid, about 500 m, has a year that is only slightly longer than the Earth’s (~436 days), and gets within 0.002 AU of the Earth. In fact there is a low probability (0.037%), that it hits Earth in the next century.

Why is this sample from this asteroid important, though? The asteroid Bennu is believed to be as old as the solar system itself (~4.5 billion years old), which means that it tells us about the composition of the solar system when it formed. This is important because we do not know that much about the composition of the original solar system. With this sample, scientists will now have a large amount of data to go through and test to see how and what has happened since the solar system formed. Bennu is a b-type asteroid, which means it has a low albedo (it does not reflect much light).  This is the first sample return mission of this type, but NASA is currently planning of a sample return mission for Mars, but the return mechanism has not yet been selected. Previously. the Stardust mission was another sample collection mission that sampled the comet (mostly water ice) Wild-2, this mission used a different collection method, but collected about 10 grains that were larger than 0.1 mm, so a significantly smaller volume of material.

The sample collection event as it happened. (Credit NASA)

Recently, the OSIRIS-REx mission, which is in orbit around the asteroid Bennu, successfully completed the Touch-and-Go (TAG) sample collection event. The goal of this collection event was to collect at least 60 grams (about 2.1 oz) of sample and prepare it for return to Earth. The team did this and then some. In fact, they noticed that “some of the particles appeared to be escaping slowly from the sample collector” and reacted swiftly to correct it The team thinks that a large piece of Bennu (~1 cm) was stuck in the collector head, forcing it to stay open, thus allowing particles to escape into space.

The team was planning on indirectly measuring the mass of the collected sample by measuring the moment of inertia but feared a larger amount of sample loss would occur with that event. Rather than risk more sample loss, they are now going to stow the sample in the Sample Return Capsule (SRC) and send it home (Earth). Originally, NASA planned on having three tries at getting their samples, but because of the abundance of success they will not need this. For now, the spacecraft will begin to move away from Bennu, collecting data. In March of next year it will prepare for a return cruise back to earth.

The collected samples leaking out of the collection.(Credit NASA)

Jon Kay is a Planetary Science and Visiting Assistant Professor at William & Mary.