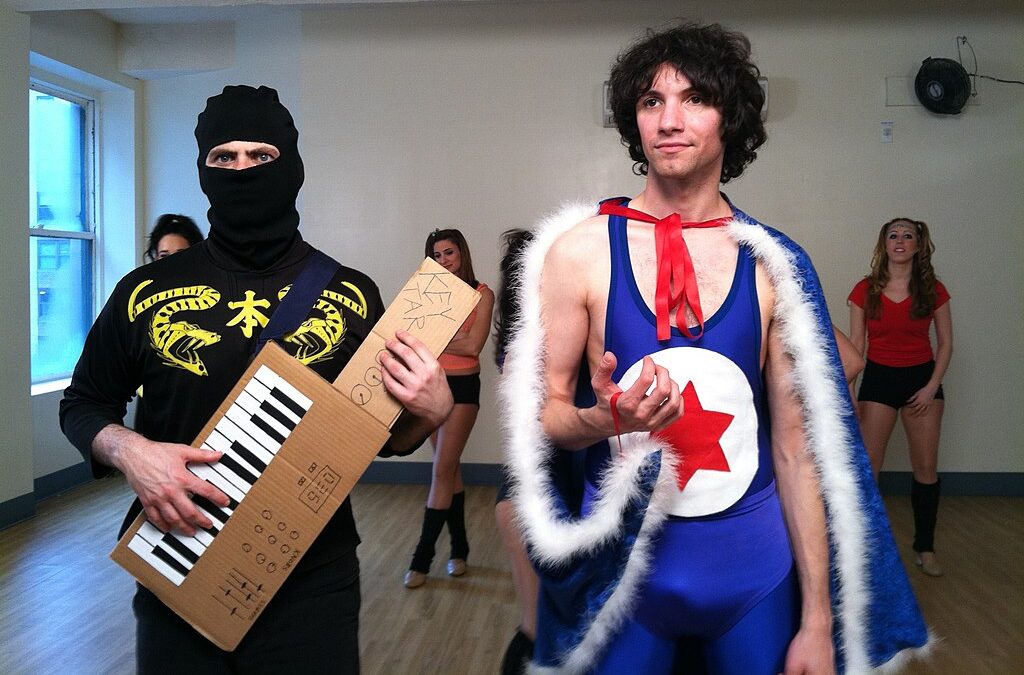 the two members of comedy band Ninja Sex Party, along with several background dancers from The Spangles, during the filming of their video Next To You, 11 February 2012. Photo by via Bwecht Wikimedia Commons

I know it hasn’t been that long since I last wrote of my favorite band, Ninja Sex Party, but since that time, they have released three music videos and an entire comedy album. Faster than I even thought. I assumed end of year would mean December or next year at the earliest (their initial release dates usually get pushed about three months or so.) Lo and behold, a new album dropped Friday, October 16th. The Prophesy!

Not to drain the suspense, but it’s awesome. Album of the year without a doubt. I’ve listened to it easily ten times in the approximately 48 hours since I bought it. Hell, I’m listening to it right now!

Five music videos have dropped for the album so far with the crowdfunded video for The Mystic Crystal on its way at some point, hopefully by Christmas. The song is nearly twelve minutes long, so that’s a lot of filming and animation and special effects. Super pumped and can’t wait for that.

I would do a thorough breakdown of every song on the album (they’re all awesome and seem to follow a different trend in rock music,) but that would be like trying to describe an amazing painting without actually providing a picture of it. Just listen to it. You can listen to the full album for free on the Ninja Sex Party YouTube page. They even got a playlist and everything.

In service of bringing you awesome music, I thought I would be remiss not to mention some other good stuff from this year. Michael Starr, the lead singer of comedy metal band Steel Panther (they strip all the veneer off of metal and make it as NSFW as possible,) did featured vocals for a song by Italian comedy nerd metal band NanowaR of Steel. It’s titled Uranus and is as euphemistic as you think it is. It’s incredibly hilarious and sharply written. Check it out. It’s on the Napalm Records YouTube page.

“Weird Al” Yankovic did featured vocals for a band he’s done a couple of remixes for.  The song is titled Who’s Gonna Stop Me by a band named Portugal. The Man. Yes, that period is part of their name. Weird, I know. It’s a really fun song, and I’m glad the comedy genius is back doing music again. The music video and the audio only version of the track can be found on the band’s YouTube page. Please be aware, the music video is political, but the song really isn’t, which is a strange bit of peacocking for no real reason.

Dan Avidan actually released a full solo album earlier this year. Dan Avidan & Super Guitar Bros. Which he did with the Super Guitar Bros. Uninspired title, I know, but a truly delicious album of acoustic covers. Land of Confusion, Kiss from a Rose, and Get Lucky are the highlights from where I sit, although Scarborough Fair and God Only Knows are also pretty sweet. They’re already working on a sequel, having done a crowdfunded T-shirt sale which sold out almost immediately (so pissed I missed it.) If this becomes an annual thing, Danny will likely release two albums a year for the foreseeable future, which is just awesome.

Tupper Ware Remix Party or TWRP (pronounced twerp,) the backing band for Ninja Sex Party since their first covers album, also released a full album, Over the Top, only a few weeks ago. No music videos yet, but the album is truly awesome. Not cracking Dan Avidan off his perch, but a solid album. Much better than their previous album, Return to Wherever, which seemed to be a concept album and lacked, for the first time since 2Nite, a song with Danny on vocals. This one has Danny back with Black Swan, a Cowboy Bebop inspired song about space bounty hunters. Planet Booty and a few other common collaborators show up as well. The album is truly funky and electronic, as you’d expect from an electro-funk band from Canada where all the members always wear full costumes, and the public doesn’t even know their true identities. Delightfully weird. I would say no truly stand out song. They’re all well done. You can listen to the full album for free on TWRP’s YouTube channel.

With all that out of the way, what gets song of the year honors from me? After careful consideration (and it wasn’t easy,) I have decided to give it to I Don’t Know What We’re Talking About. One of the rare safe for work Ninja Sex Party songs that isn’t a cover. Genius song from start to finish. It was the lead single, after all.