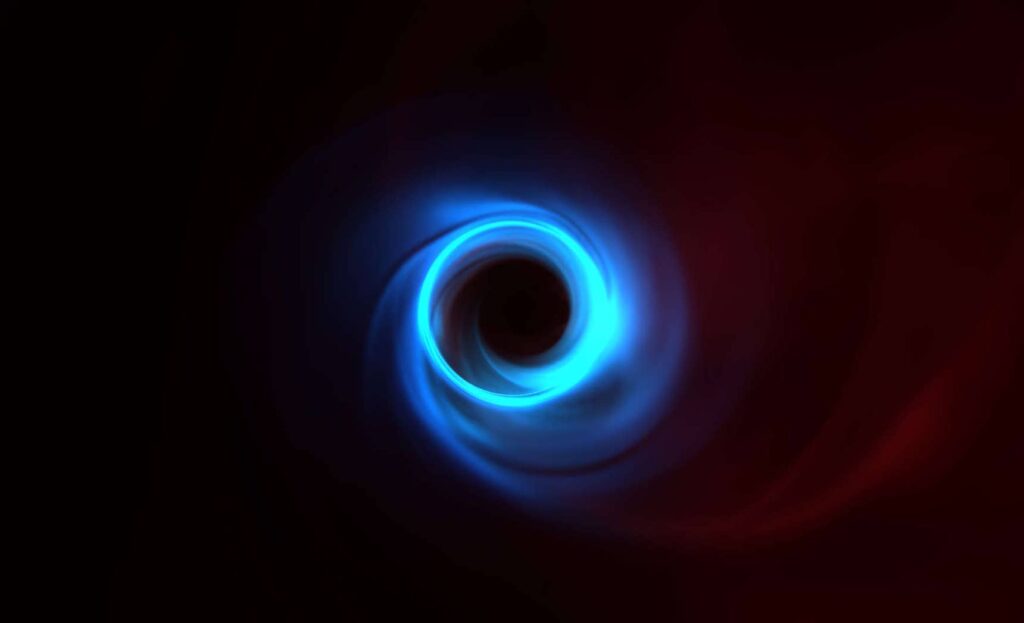 A simulation of the light emitted by material as it swirls around the black hole M87*. Red is long-wavelength radio waves, blue is millimeter-range waves (what the Event Horizon Telescopes sees), and green is near-infrared light. Credit: L. Medeiros (IAS); BH PIRE (UArizona)

[ThTh1] We have a good idea of how many planets are in our Galaxy (several hundred billion to several trillion) and a good idea of how often those planets are in the so-called habitable zone where they are close enough to the parent star to have liquid water. This information, all of which has come about in the last twenty years, has allowed us to speculate about life in our Galaxy on a scientific basis for the first time.

However, the circumstances that allowed life to evolve on Earth are kind of unique. Had the Earth been too small — like Mercury or Mars — its core would have cooled off. Without that core and the magnetic field it generates, Earth would long ago have lost its atmosphere or been too battered by the solar winds for life to survive. Venus was a good size but was a little too close to the Sun and, as a result, had a runaway greenhouse effect. There might be life in its clouds, but if so, it’s a very simple and primitive life. Even more interestingly, the Moon may have played a critical role in Earth’s development, slowing its rotation and stabilizing its tilt.

We also now know that planets can migrate — forming in one part of a star system and moving around. This could disrupt the orbits of smaller planets, cause storms of meteor impacts or have other effects that disrupt the stability needed for life to evolve. There are theories that the planets in our system migrated at one point, long long ago.

All of these factors means that while planets are common, there reasons to believe that habitable planets may not be. A new analysis sheds a bit of light on this question. Astronomers have sifted through the nearly 5000 planets discovered outside of our solar system to identify those that may be habitable. And their early analysis indicates that some of them may have conditions that are even more amenable to the development of life — greater stability, more water, etc.

The key word in the paragraph though is “may”. We don’t know about the conditions on those planets. This paper is not claiming that they are “superhabitable”. It’s claiming that they might be and that future studies of exoplanets can focus their studies more narrowly to definitively find habitable planets.

We are in the early days of an exciting phase of astrophysics: an age of exploration of planets outside our solar system. The science has been moving fast. It’s going to start moving even faster.

[ThTh2] Congrats to the newest Nobel Laureates, including only the fourth woman to win one. There was a time when Nobel Prizes for astrophysics were quite rare. That time seems to have passed.

[ThTh3] There’s a growing argument that COVID-19 spreads primarily through superspreader events; that the “R ratio” — the average number of people an infected person infects — is misleading. What may matter more is the dispersion. Most sick people won’t infect anyone. But some infect a massive number. This kind of makes sense because the window during which COVID is most infectious appears to be both small and heavily concentrated to when the patient is pre-symptomatic.

We are in a strange position with COVID-19 of having learned more about it faster than any virus we’ve encountered and still having a lot to learn. But if this argument is correct, it may turn out that cancelling mass events is the most critical part of our fight against the virus.

[ThTh4] Amazing imaging and analysis of a black hole just made it way harder to disprove Einstein.

[ThTh5] A wonderful video from NASA showing the fading of a supernova in a relatively nearby galaxy.

[ThTh6] And while I won’t link the whole thing, here’s Chris Hadfield reviewing the technical accuracy of space movies, including the execrable Armageddon.1

[ThTh7] Rogue Earths! And boiling planets!. Exoplanets has it all.

[ThTh8] In in the words of Andrew, there is fairness in this accusation.

In astrophysics, you would:
– get a distance wrong by 2 galaxy diameters and call it "accurate"
– cheer if a star explode (likely wiping any other civilization around)
– make predictions about *the past*
– consider 1 million year a short time
– call a 10,000K gas "cold"
..more?

[ThTh9] Now I know what I want for Christmas.