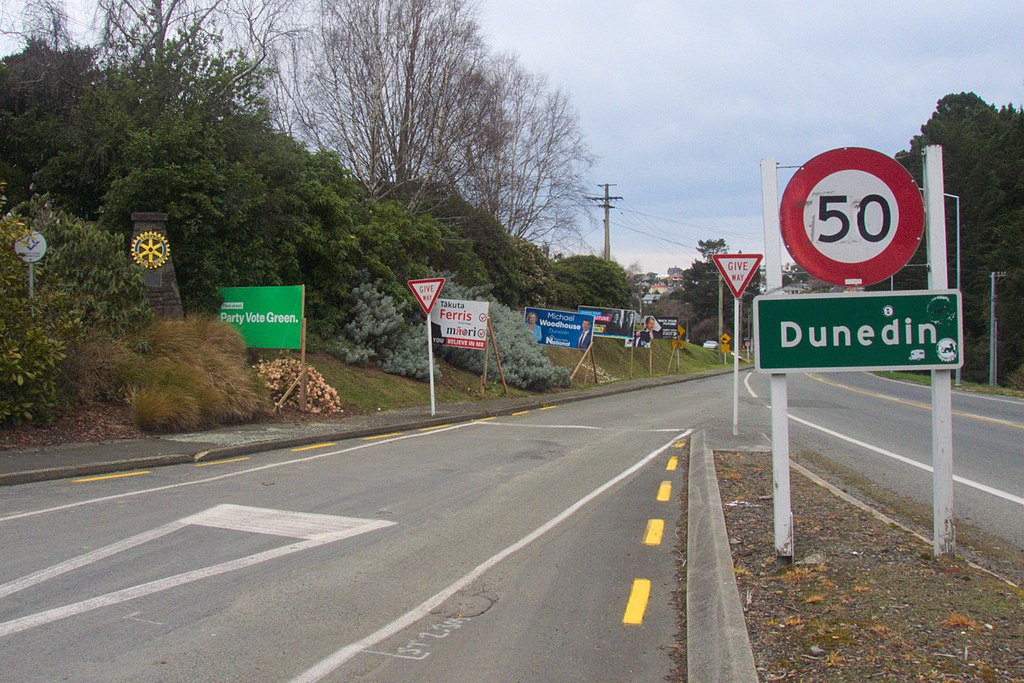 Campaign Signs along intersection of SH1 (Dunedin Northern Motorway) and the layby near the Pine Hill suburb, 28 August 2020. Photo by Air55 via Wikimedia Commons

New Zealand holds a General Election every 3 years, and every election I do a post outlining what is being debated and who the major players are. Our election is to be held on October 17th, and early voting has already begun.

Before I get started, I just want to emphasise that I am making these comments in my capacity as a private citizen. Most especially, my views do not represent that of my employer, or any other part of the New Zealand government.

There are two things you need to understand about our electoral system for anything else I say in this post to make any sense at all. These features don’t exist in the US, or even other Westminster countries, so they need a little explanation.

The first is our Mixed-Member Proportional (or MMP) voting system. MMP is a half-way point between the First-Past-the-Post system used by the UK and US and a true Proportional Representation system. Each election, each voter votes for a candidate to represent their electorate in Parliament (this works the same way candidate voting does in the US and UK), but they also vote for a political party directly. These party votes are tallied and each party gets a number of seats in Parliament in proportion to their share of the Party Vote. A party’s allocation of seats is first filled by any candidates who were voted into an electorate, and the remainder are taken from the Party List: a ranked list of would-be MPs which each party published before the election.

To get into Parliament a party must either win an electorate seat or get at least 5% of the Party Vote. Parties that fail to meet at least one of these criteria get no seats in Parliament and their party votes are effectively discarded from the total votes cast. For more information, see this explanation by the Electoral Commission.

Our system has led to a multi-party Parliament, though the number of parties has been dwindling over time. Since 1996 when MMP was introduced no party has won 50% of the seats in Parliament; this also means that every government these days is a coalition of one of the major parties (Labour or National) and one or more of the other parties in Parliament.

The second unusual aspect of our electoral system is that we have two parallel sets of electorates. Upon turning 18 any New Zealand resident of Maori descent (New Zealand’s indigenous people) has the option of registering on either the General Electoral Roll or the Maori Electoral Roll. While the party votes from both electoral rolls are added together, each part of New Zealand is part of two electorates – A Maori Electorate and a General Electorate. Which roll you are on determines which set of electorate candidates you get to vote on. 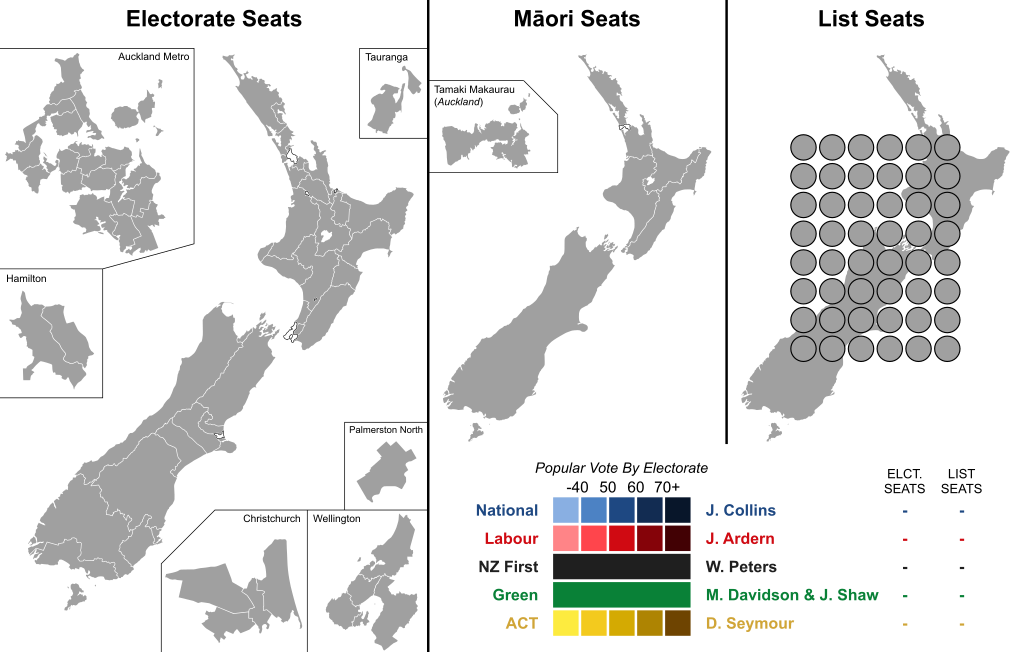 Map template for the 2020 New Zealand general election. By Erinthecute via Wikimedia Commons

These are the parties I think have a reasonable chance of getting a seat in Parliament. All of them already have a Parliamentary seat already. A lot of people think of Left and Right as absolute political directions that are common across countries, but that doesn’t make sense to me. As you will see, New Zealand’s left and right don’t map onto the US’s, despite the efforts of some American pundits to force them to.

Given the coalitional nature of our politics, here is the left-right framework that makes most sense for New Zealand politics:

The Labour Party led by Prime Minister Jacinda Ardern. The current government party, it held 46 seats during the last term, holing control of Parliament by virtue of a deal with New Zealand First and the Greens.

The Green Party led by James Shaw and Marama Davidson has a big focus on the environment but also social justice issues. It held 8 seats in the last Parliament, making it the second-smallest party in Parliament. The Greens have had some difficulty maintaining their visibility as part of the government, but they are still polling a bit over the crucial 5% threshold at the moment. Davidson was elected co-leader since the last election,

New Zealand First, led by Winston Peters. They are a Trump-style conservative party that I am counting as left-wing since National ruled out forming a coalition with them this election (and, honestly their economic platform is a closer fit for Labour than it is for National). They are the third-largest part in Parliament with 9 seats. They are currently polling well under 5%, so there is a decent chance they won’t be in Parliament after this election.

The National Party, led by Judith Collins, is the largest party in Parliament. They held 56 seats at the start of the term, but lost 2 during the term (one left National and become independent, the other quit Parliament too close to the election to be replaced, leaving their seat empty). National has had three changes of leadership since the last election. Bill English (who led National at the last election) quit shortly after the last election. He was succeeded by Simon Bridges, who was ousted by the party in May 2020 due to poor poll performance. His successor, Todd Muller, in turn resigned in July due to a couple of scandals he wasn’t implicated in, but found too stressful to continue leading the party. This instability has not been good for then, they are currently polling around 25%.

ACT, led by David Seymour, its only MP. ACT is a libertarianish party, but with more of a law-and-order bent than that implies. ACT has remained in Parliament by virtue of a deal with National, where they endorse Seymour in his Epsom electorate in order to ensure ACT gets an electorate seat. This year though it looks like ACT won’t need the help. ACT is currently polling above 5%, meaning that it looks like ACT will get more than 1 MP for the first time in a decade.

If you’d like to have a look at major policies of each party, you can browse through policy.nz, produced by New Zealand news site The Spinoff.

While New Zealand has weathered COVID well and our politics around the COVID response has been less … rancorous than the US’s, the parties still have different approaches to COVID response. The government has kept our border strictly controlled since the original lockdown order in late March. National and Act agree with the general approach, but want to allow more hotels to act as isolation facilities, creating a market system for allocating isolation beds.

The financial support to deal with the effects of COIVD has affected the government’s Budget. Treasury’s pre-election forecasts predict government debt will rise to 55% of GDP in 2024. Labour is proposing more financial support for businesses affected by COVID. National’s plan is to cut taxes and rely on growth. ACT wants to cut taxes, but also cut spending (especially the Provincial Growth Fund that was introduced as part of the deal between Labour and New Zealand First).

The other big issue is housing, with ACT and National wanting to amend or replace to Resource Management Act (RMA) to make it easier to densify housing. Labour and the Greens want to focus more on increasing state housing, though Labour also recently promised RMA reform too.

There are also two issues up for referendum this election. New Zealand has a history of using referenda that is lacking in other Westminster countries – having only one legislative house we tend to use referenda as a check on Parliament for resolving constitutional issues, but occasionally Parliament puts other questions to the People to resolve. Note that Parliament has already drawn up legislation for each of these questions, so each of these is a vote on a specific legal change:

At the high level there is no reasonable doubt about the outcome of the election. The last time a government lost an election after 1 term was 1975, and the Labour government is polling very well. The general consensus here is that the government has handled the pandemic well (New Zealand has 25 COIVD deaths, a death rate of 5 per million, this is about 1/100 of the deaths per million of the USA), and that makes it even less likely Labour will lose here.

But that doesn’t mean there aren’t things to watch out for this election:

So that’s where things stand now, following election day, I’ll post again discussing the results. If you have any questions or comments, feel free to comment to discuss things.