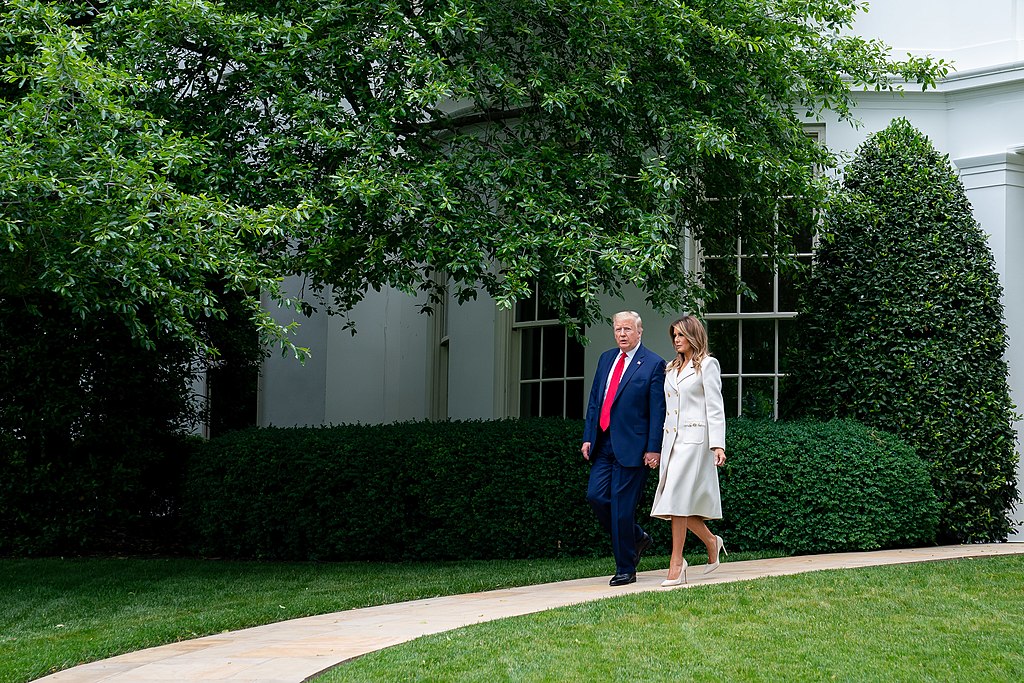 President Donald J. Trump and First Lady Melania Trump walk from the Oval Office of the White House to board Marine One on the South Lawn Monday, May 25, 2020, en route to attend a Memorial Day ceremony at Fort McHenry National Monument and Historic Shrine in Baltimore. 25 May 2020 Official White House Photo by Tia Dufour [Public Domain]

The president is being moved to to Walter Reed Military Medical Center, long the home of a presidential suite and offices designed specifically for the use of POTUS, for “at least a few days.”

BREAKING: President Trump walks from the White House to Marine 1 as he departs for Walter Reed Medical Center. https://t.co/fsOmqt6C31 pic.twitter.com/dsCQpY8vHh

The President announced overnight that he and the first lady have contracted Covid-19 virus.

President Trump and his wife, Melania, have contracted the novel coronavirus, he announced early Friday, after months in which he has often played down a pandemic that has killed more than 205,000 Americans and sickened millions more.

Trump, 74, was diagnosed hours after it became publicly known that Hope Hicks, a top Trump aide who traveled with him on Air Force One and Marine One this week, tested positive Thursday morning.

“Tonight, @FLOTUS and I tested positive for COVID-19,” the president tweeted just before 1 a.m. “We will begin our quarantine and recovery process immediately. We will get through this TOGETHER!”

The president’s physician, Sean P. Conley, wrote minutes later that Trump and his wife “are both well at this time, and they plan to remain at home within the White House during their convalescence.”

Hope Hicks, one of President Trump’s closest aides, tested positive for coronavirus on Oct. 1. She’s not the first White House official to contract the virus. (Photo: Jabin Botsford/The Washington Post)
The president is expected to conduct official and political events from the residence — including a call on Friday with senior citizens about the coronavirus.

The diagnosis is a jolt for the country’s leadership and had some advisers early Friday discussing the continuity of government should the president’s condition grow worse. The vice president was not known to be infected.

Trump’s early-morning announcement marked an extraordinary turn for the first family, coming little more than a month before Election Day and as Trump has escalated his campaign pace in an effort to catch Democratic nominee Joe Biden, who leads in national and key state polls. Trump, aides and voters say, trails largely because of his handling of the virus, which has dominated voters’ attention along with the economic collapse caused by pandemic shutdowns.

The plan for presidential quarantine is mostly known:

In a research note published earlier this year, John Hudak, a senior fellow and deputy director at the Brookings Institution’s Center for Effective Public Management, outlined some of the scenarios designed to “protect the president, the integrity of the office, and the continuity of government” in the event of a positive Covid-19 test.

Hudak said the test, in itself, would not be cause for emergency action. Instead, Trump “would likely be able to continue his everyday activities and manage the office either undisturbed or with mild challenges.”

It was expected to create some challenges for those around him, however. “The need for 24-hour Secret Service protection could put agents at risk for contracting it. But given modern technology, the president could quarantine and have remote or sufficiently distanced contact from most, if not all, aides, including the individual(s) who would be involved in the presidential daily brief,” Hudak said.

Trump’s positive coronavirus test does mean other precautions need to be taken, with those in the line of succession likely to be in limited contact with the president to reduce their chances of contracting the virus.

Vice President Mike Pence, House Speaker Nancy Pelosi, Sen. Chuck Grassley (who serves in the role of president pro tempore, making him third in line for the presidency), and members of the cabinet will all need to be isolated from the president, Hudak explained.

The President announced overnight that he and the first lady have contracted Covid-19 virus. Mostly, folks are getting waaaaaaay ahead of themselves here. First thing, the array of symptoms and level of serious vary widely from patient to patient, and we hope the president and first lady have the mild case and recover quickly. The government can function just fine without a president and has straight forward protocols for line of succession both for temporary transferal of power to the vice president which has happened many times, and in worse case scenarios of presidential incapacitation. No, there will not be a President Nancy Pelosi, despite what some corners of social media might be wishing for. Even if the VP assumes the duties of the office it would be temporary until the president resumes them, resigns, or God forbid dies. The rest of the line of succession past the VP assuming office, in which case they would immediately submit their own pick for VP to congress for starters, is a bridge best left cross only if needed.

But assuming the president does his quarantine and moves on from it, there is quite a bit of chaos to an already messy fall this will cause. A normal quarantine period would mean the president would not be available for the next scheduled presidential debate, for example. The Trump campaign has already canceled this week’s rally, along with all other events for the foreseeable future. With just over 30 days to go to election day, the president is now set to spend at least half of that isolated in the White House. The president, who has lobbed jabs at his opponent and fellow mid-70s aged man Joe Biden for “hiding in his basement” now has the prospect of his own campaign being all virtual.