Writing the Lead on the Way to the Ballpark: Debate Edition 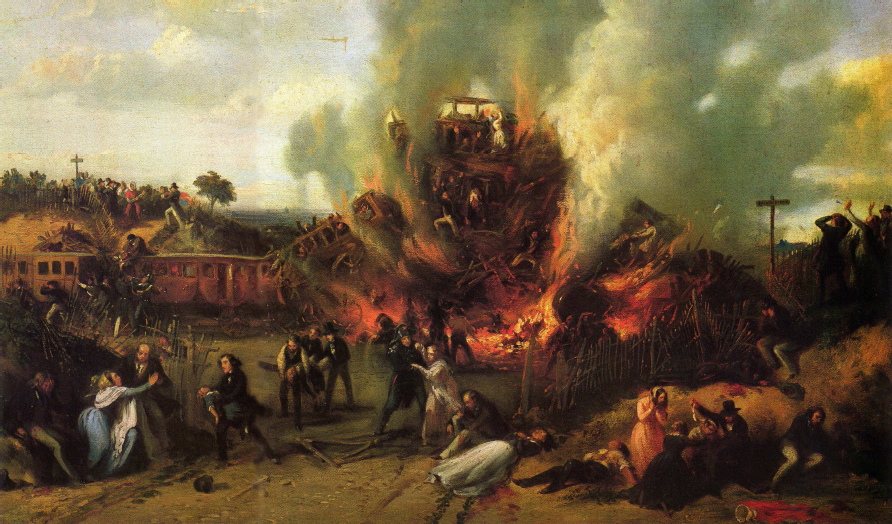 Versailles rail accident in 1842, perhaps a preview of the coming debate when the candidates will be almost as old as the painting.

Hi, gentle readers. It’s going to be a very busy week for me. So I’m going to write and publish my debate reaction piece before the actual debate, then see if it needs any updating afterward. I expect it will not. This is a bit of burden on the editors, but they’re used to me being a burden. Oh, and that reminds me that I need to return someone’s scythe, helmet and melon baller as soon as I can. Astronomy demos, man …

Well … that was a thing. The first debate of the 2020 Presidential cycle was last night. And like all bloggers, I am no contractually obligated to react to it before Will docks my pay.1. Here are a few scattered thoughts a few hours after the dust settled and the last of the hysterical people throwing their underwear up on stage was dragged away.

Overall, neither candidate scored big nor did either candidate damage himself irreparably. Biden was competent in his answers and Trump was … well, whatever his supporters want him to be. Both sides are out there right now proclaiming victory based on early polling and the response of their favored media outlets.2 Both sides are saying this proved the other candidate is too old and senile to govern. They are both right about the latter, but overall, it cancels out. I don’t expect the polls to move very much.

Neither candidate said much we haven’t heard before. Biden emphasized Trump’s poor response to COVID-19 and the divisions he has sewed in this country. Trump emphasized the Far Left and tried to tie Biden to the rioting over the summer.3 Biden talked about some of his plans that will never happen. Trump proclaimed the passage and success of plans that, technically speaking, don’t exist. I’m aware that Twitter erupted proclaiming that Trump’s admission to telling Pompeo to put a Trump sign on his yard is the scandal that will finally bring him down. But I expect that noise will die down by morning.

It has never been a better time to be a fact-checker and last night should provide ample fodder. Joe Biden’s claim that Trump has deported 4 billion immigrants will be challenged. And I suspect Trump’s claim that he has more taxes than anyone in history will be similarly scrutinized. But, really, we have a combined 150 years4 on these men. If you don’t already know that Biden is prone to gaffes and Trump is prone to lies, that’s on you.

Probably the oddest moment of the night was when a question about the budget diverged into a 15-minute discussion of whether Elvis was the greatest of all time. And while I appreciated the discussion, I’m not really sure we needed that story about how Trump lost his virginity listening to Return to Sender. Although I was impressed that the Biden campaign so quickly had T-shirts available with Trump’s image and ‘Return to Sender’ stamped across it. There were also those few minutes in which Trump repeatedly accused Biden of being anti-Catholic because of his criticism of Barrett while Biden kept reminding him that he’s Catholic. This seemed to skirt the important issues, though and I really think we could have done without Trump’s final retort of, “But do you #%#@ in the woods, Joe?” But at least that gave the Trump campaign their T-shirt slogan, so it all works out.

Biden admitting that he had COVID-19 several months ago was probably the most dramatic moment. It’s a risk since I’m sure the Republicans will say it proves he’s too sick and frail to be President. But I think a lot of people will feel like this make him extra-qualified to dealt with the crisis. Trump claiming he cured Biden’s COVID-19 by laying his hands upon him will go over well with his evangelical base. So, overall, probably a wash on that front.

What jumps out at me, though, are how little time was spent on issues. I will give Biden credit. He tried, saying specific things about the ACA, COVID-19, the economy, etc. Not, like, really great specific things or necessarily coherent ones but … you know … specific things. But Trump continued to derail those into talk about the “Radical Left agenda” and Biden kept sinking to the occasion by pointing out Trump’s failings and asking him how he liked Stormy Daniels’ breasts, since access to them cost him more than he paid in taxes over the last decade. Of course, we never got any discussion about the climate, the budget deficit and trade.

So, in the end, a lot of sound and fury signifying nothing. Neither candidate made a fatal mistake. Neither candidate had a real mic-drop moment. We’ll spend a week watching any statistical noise in the polling be proclaimed a trend5.

In the end, we’re still where we were a few months ago: Biden is up in the polls. Trump still has the same fighter’s chance he did in 2016. And, if we’re lucky, this will all be mercifully over no later than Boxing Day.