Do You Have What It Takes to Be a Revolutionary? 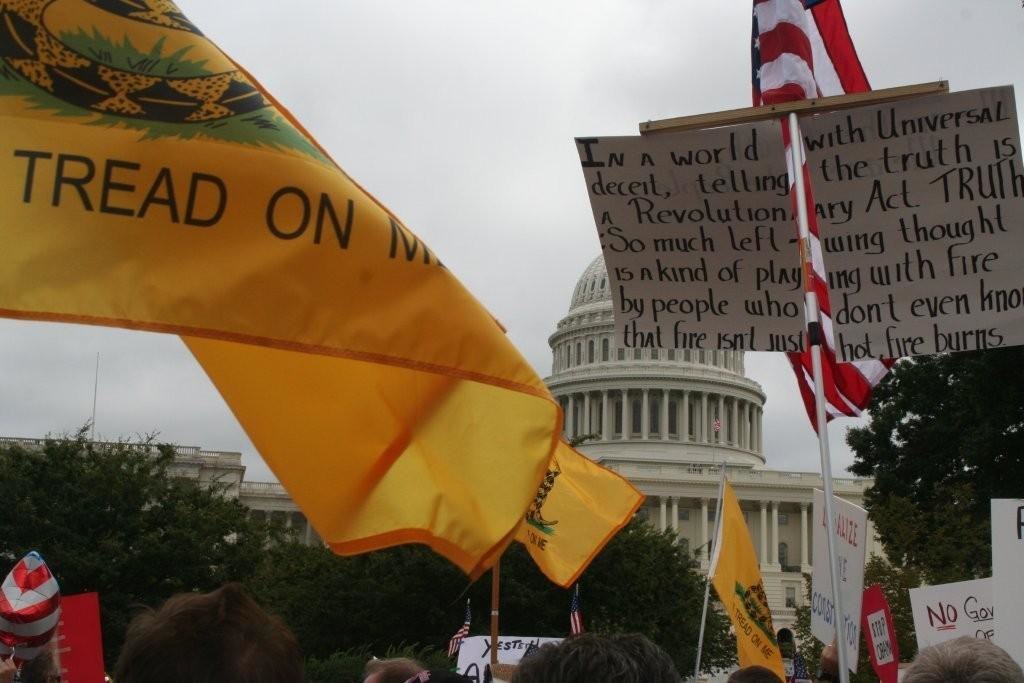 A Tax protest in Washington DC, September, 2009. Photo by Patiotroom via Wikimedia Commons

It’s the middle of the night, and you’ve snuck off to the kitchen to grab a quick snack. Outside the window, the faint glow of a full moon reveals an imposing tank-like vehicle parked in the street. You can just barely make out what appears to be a single-file line of shadowy figures slowly approaching the rear entrance to your home. As they move into range of the porch light, you notice that they’re armed. You quickly but quietly dash back to the bedroom. Atop a faded, hand-me-down dresser sits a small, steel safe. You unlock it, open the door, and seize hold of the 9mm pistol stashed inside.

You know why these government agents are here. Earlier that day, you logged into your Facebook account and posted a satirical cartoon image of a certain religious prophet. There was a time when it was perfectly legal, albeit risky, to share those sorts of images online, but that’s not the case anymore. A new prohibition on hate speech was recently signed into law. It explicitly prohibits the production of images intended to mock, demean, or incite hatred against religious minorities.

You knew that when you posted the image on Facebook. You also knew there was a good chance that some random busybody with a penchant for snitching would come across your post and report you to the authorities. But you did it anyway because you dislike organized religion, and you refuse on principle to hold your tongue. It’s time to take a stand and…

BOOM! A paralyzing melody of metal on wood has frozen you in place. They’ve brought a battering ram. It’s only a matter of time now. You raise your weapon and take aim for the dimly lit hole in the middle of the door.

BOOM! They’re almost through. One more strike ought to do it.

BOOM! The door flies off its hinges. You’re locked and loaded, finger on the trigger.

Could you do it? Could you bring yourself to pull that trigger, and do you think you’d be justified in doing so?

This question has been gnawing at me for the last couple weeks. It was posed to me by my dear friend Riley, who, like me, believes that freedom of expression is the single most important right any of us has—even more important than the right to life. The two of us had just been discussing the news that 14 alleged accomplices to the 2015 terrorist attack on Charlie Hebdo were going on trial in France. I suspect that was the story responsible for planting the seed that sprouted into Riley’s hypothetical scenario.

How far would I go, she wondered, in defense of what I believe is my inalienable right to speak my mind? Would I pull that trigger, or would I lay down my weapon? Would I choose violence over submission, or would I surrender to the authorities and let the courts decide my fate?

It’s not the simple yes-or-no question it seems to be. When Riley asked it, I reflexively answered no, but then immediately took that answer back. I wanted to say no, but my inner rebel—which only ever seems to show up in imaginary situations that have virtually no chance of ever happening—kept telling me to tap the brakes and reconsider.

I could easily argue that I’d be morally justified in pulling that trigger. As far as I’m concerned, each and every one of us has a natural, inviolable right to express any opinion or idea we wish to share with anyone who’s willing to listen. Even if the Constitution were amended to give the government the ability to prosecute citizens for allegedly offensive speech, I would never acknowledge or respect it. I would instead choose to resist. I’d try to undermine the government at every possible turn and use my (admittedly limited) skills to try to neuter its ability to track down and incarcerate citizens who refuse to comply with its illegitimate restrictions on speech.

I am however very much aware that a morally justifiable act isn’t always a morally preferable act. That’s an important distinction frequently overlooked in these sorts of thought exercises. I do believe that resorting to lethal violence to stop the government from violating my sacrosanct right to free speech might be morally justifiable, but I’m not at all convinced that it would be morally preferable. There could be more appealing alternatives available to me that don’t involve the use of lethal force.

A fugitive’s life isn’t something I covet, but I think I’d probably favor a life spent on the lam over a life spent as a violent revolutionary. So, if I were presented with the opportunity to make a run for it when those agents came to haul me off to prison, I’d have to consider taking advantage of it.

If that option weren’t on the table, I could try to use nonlethal force to drive those agents away. But it’s laughable to think I’d have any hope of pulling that off. Even if I did somehow manage it, they’d just come storming back with twice as much manpower as before. I wouldn’t stand a chance.

The last option that comes to mind is surrender. I loathe that option almost as much as I loathe the idea of pulling that trigger. Still, if I had to choose between the two, my gut tells me I’d probably choose the former.

By now, you’ve probably inferred from my words and tone that I’m not terribly fond of violence. In fact, the truth is that I abhor real-world violence and regard it as nothing more than an occasionally necessary evil.

For as long as I can remember, that’s how I’ve always thought about violence. When I was a kid, most of my friends dreamed about becoming a real-life Rambo or James Bond. I dreamed about becoming Captain Kirk from Star Trek. I also grew up in awe of professional athletes, but I never admired the players known for stirring up trouble. With very few exceptions, my biggest sports heroes were class acts both on and off the field. I’ve only been in two fistfights in my adult life; both of them were started by the other guy and couldn’t be settled any other way. And when I chose to study martial arts, I did so not because I was itching for a fight, but because I recognized the benefits of knowing how to fight.

Nevertheless, were I confronted with the scenario that Riley laid out for me, I am extremely hesitant to say with absolute certainty that I would not pull that trigger. There are two specific reasons for that.

Firstly, as any student of history can tell you, passive resistance has its limits. In any conflict, when the momentum has swung against you with such overwhelming force that you can feel the hot breath of defeat rolling down the back of your neck, a single desperate act of violence can be just the spark you need to flip the momentum in your favor. Those moments are exceedingly rare in democratic societies where citizens are given myriad nonviolent options to effect political change. But if the day ever comes when offensive speech is no longer protected in the United States, I believe it will only be after many of the other rights we take for granted have already been severely restricted or eliminated, potentially leaving violent resistance as the only viable option available to those of us who will never agree to forfeit the right to freely express ourselves.

Secondly, if I were to admit that I would never pull that trigger, I feel like I’d be conceding that I as a citizen have an unshakable moral duty to peacefully submit to unjust punishments made possible by unjust laws. That’s not a concession I’m prepared to make. Although I’m willing to entertain the idea that violent resistance would not be morally justified in Riley’s scenario, I will never agree that I would be obligated to comply with any law against offensive speech.

At the end of the day, I really just don’t know if I could bring myself to pull that trigger. And even if I could bring myself to do it, I’m not at all sure that I would. I’m also not sure whether I should be proud of my aversion to violence or ashamed of my apparent cowardice. But if there is one thing I do know, it’s that some questions are best left unanswered. And it seems to me that this is probably one of those questions.