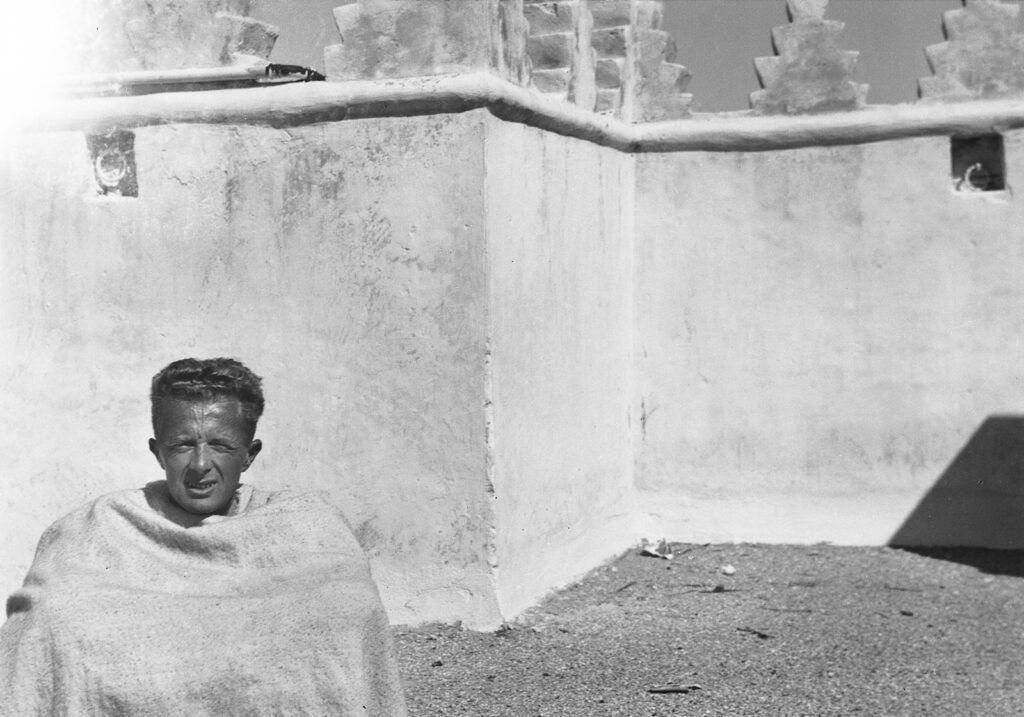 {Note: this is the third in a series. We have already discussed Paul Bowles’s novel The Sheltering Sky and Jane Bowles’s Two Serious Ladies.}

Paul Bowles moved to Morocco in July, 1947; his wife Jane arrived the following year. Aside from a few brief excursions elsewhere, he lived in the country for the rest of his life, until his death in 1999. Bowles was more dedicated than most westerners to understanding the people there: collecting folktales and recording local music, becoming fluent in Maghrebi and familiar with Islam. The character Stenham in Bowles’s 1955 novel The Spider’s House allows himself, for similar reasons, “the little indulgence” of having a “small sense of superiority” over the French authorities and American and British tourists. In the end, though, he never closes the gap in understanding the natives and I suspect Bowles would have doubted the possibility of ever really doing so.

The novel is set in 1954, an era in which forging understanding might have been useful. Morocco had been a French “protectorate” since 1912, which meant they were essentially ruled by French troops. But France had wanted to colonize the mineral rich country since conquering the neighboring “pirate utopia” of Algiers in 1930. Since the Fez Riots of 1912, various nationalists had tried to dislodge the French, although it took until after World War II for them to put aside their own differences enough that the Istiqlal or Independence Movement could issue their manifesto- with the secret approval of Sultan Mohammad V.

Incidentally, Mohammad V is remembered as both the champion of the independence movement and for protecting the Jews of Morocco from both the Vichyite French and the Nazis during the war. One might imagine the French would have learned from the war how instinctively people tend to hate imperial rule.

Things came to a head: in late 1952, a Tunisian labor leader, Farhat Hached, was assassinated, which led to riots in Casablanca, and Mohammad V was forced by the French into exile in Corsica; they replaced him with his cousin as Sultan Mohammad VI, who was naturally hated from the start. By 1954, the days of French rule in Morocco were coming to an end.

Paul Bowles had already been working on a novel set in Fez “because it was a medieval city functioning in the twentieth century” when events forced themselves upon his story. He was of the strong belief that fiction should “always stay clear of political considerations” and, as a writer, remained coldly aloof. But, in times of social conflict, it’s nearly impossible for anyone to stay aloof; as Bowles noted: “To be apolitical is tantamount to having assumed a political stance, but one which pleases no one.” Naturally, his characters, individuals living in Fez at the time of the uprising, find it no easier to keep above the fray. Each eventually comes to their own position on events, which has the effect of making each character a type to some extent, but also gives the author room to critique each of their relative positions.

One assumes the original story focused on Amar, an illiterate Muslim boy whose tale makes up the first third of the novel. The son of a strict healer, who can be as cruel as Bowles’s own father was, Amar has been given the gift of Baraka- or at least believes he has. His family has, nevertheless, been impoverished under French rule and much of his time is consumed by finding work to bring them money. There is no hope of sending him to school. Amar lives in a sort of eternal present in which all that happens is by the will of Allah. His responses are simple, but also reasonable. He hates the French, who have kept Fez under the thumb of force and have no intention of ameliorating its supposed “backwards” state. As Bowles also realized, “if Morocco was still largely a medieval land, it was because the French themselves, and not the Moroccans, wanted it that way.” Naturally, Amar wants them out.

A series of events draws Amar into the orbit of a nationalist leader and perhaps it seems he would become a fighter for jihad, but he is also repulsed by the group’s impiety. Islam is dying under the French, as he sees it, but won’t be saved by the Istiqlal. Amar is the closest figure in the story to a holy fool. He’s also an extremely realistic and well-drawn character, not the easiest thing for a western writer to pull off, although it’s likely Bowles’s close proximity to Moroccan boys explains some of this.

The closest the novel has to the “Western” perspective is an American widow named Polly, or Lee Burroughs (a nice reference to William S. Burroughs, who often went by his mother’s name Lee), a sharply sophisticated, liberated woman and devout believer in secular progress. She believes a Moroccan would naturally “welcome the hospitals and electric lights and buses” and we can’t help but notice that, in Amar’s view, nearly everything she does, as a woman, is shameful and heretical. Her fear of religion is a fear of losing her highly developed identity.

Lee is really a foil for the American writer Stenham who romanticizes what Morocco was before the French ruined it:
“When I first came here it was a pure country. There was music and dancing and magic every day in the streets. Now it’s finished, everything. Even the religion. In a few more years the whole country will be like all the other Moslem countries, just a huge European slum, full of poverty and hatred.”

Stenham is a bit of an exemplar of the 20th century western intellectual. He began being repulsed by inequality, which led him briefly to communism, which then repulsed him as part of the “senseless march of universal brotherhood,” in which every man gives up a part of himself to take part in the “equality of the damned.” Having rejected Marxism, “he had come to execrate the concept of human equality… there could be no equality in life because the human heart demanded hierarchies.” Having nowhere to go, he retreated into subjectivity, ending at a sort of quietism that rejects the will, and specifically the will to change things, altogether. He has not come to the submission of Islam, but he is sick of the French and the nationalists, asking Polly why the Moroccans have “to accomplish something? Can’t they just be let alone and go on as they are?”

At this point, no one can be let alone. As the situation in Fez becomes less stable, the French respond in the way anyone familiar with their type of imperialism would expect: rounding up anyone who might have been involved in disturbances, or even sympathetic to them, in mass arrests, curfews, torture, the ratissage. Imperialism always fails to win hearts and minds perhaps because imperialists cannot understand the hearts and minds of subject people in the first place. The Ottomans weren’t noted for their liberalism either, but they lasted longer because they knew enough to leave people alone for long stretches of time.

Individuals can hardly understand each other’s hearts either. Stenham and Lee leave Fez for a religious festival in the mountains- prohibited by the nationalists because it would take place under a false Sultan- taking Amar with them as a sort of guide. Lee and Stenham bicker throughout and then wind up together- a move that felt a bit false to me. More affecting is the seeming kinship between the boy and the man, who both view the situation with clear eyes- things will be no better for the average person under the nationalists because the real target of mass political movements- the true subject of their ire- is the notion that some corner of the soul might remain apolitical– not be the subject of public power struggles. Collapsing power structures open up everything to political fighting, nothing is sacred, a situation that favors no one but totalitarians. Under these political structures, a holy fool like Amar will take it in the neck.

By the end, it seems as if Stenham might become a surrogate father for the boy, but this too assumes he has ever really seen Amar. We assume he has because of his hyperawareness of the failings of European imperialists. But, he also shares many of those failings and, as ever, nothing is as easy as we hope it would be in Bowles’s fiction.

So, what are YOU reading, pondering, playing, watching, or creating this weekend?