In Planescape: Torment, you are a zombie-ish kinda character who wakes up on a slab in a fantastic mortuary and the first mystery given to you is your name. You don’t know it. And so you embark on a journey in a magical land where you’re not only learning all about yourself and your backstory, but you’re learning and exploring this world that is vaguely similar to D&D but also exceptionally different from much of what you’ve experienced if you’ve never cracked a Planescape book. (Planescape is, technically, D&D but the rules are so nutty and topsy turvy that it’s like comparing The Smurfs to The Snorks. There are a lot of similarities… but the universes are completely different.)

As I play Disco Elysium ($40 on Steam but, seriously, worth every penny), there are a huge amount of rhymes with Planescape: Torment and I can say that this is a game for anyone who loves the old isometric D&D games and anyone who loves a good RPG and anyone who would like the idea of playing a Lynchian detective game.

You start out juuuust before you wake up from the worst hangover ever. You’re aware that you’re not aware. You’re in a deep black nothing. You have a conversation with your limbic system and slowly come to. You’re on the floor. Get up, go look in the mirror. Ugh. Who is that guy? Wait… what’s your name? Better get dressed and find out. You explore your (trashed) room that is, apparently, in a hotel? And you’re missing a shoe? Where’s your other shoe?

And you find your other shoe, you wander downstairs and try to gather hints about who you are. Who am I?

It turns out that you’re a detective. You’re investigating a murder. Oh, you have a partner. Bummer, he’s never met you before. Now you have to figure out who you are, what happened with the murder, and, as you do so, you explore this world that is very much not The Real World like the one you and I enjoy, but something vaguely adjacent. You’re in another country, in another time, and the rules are different. 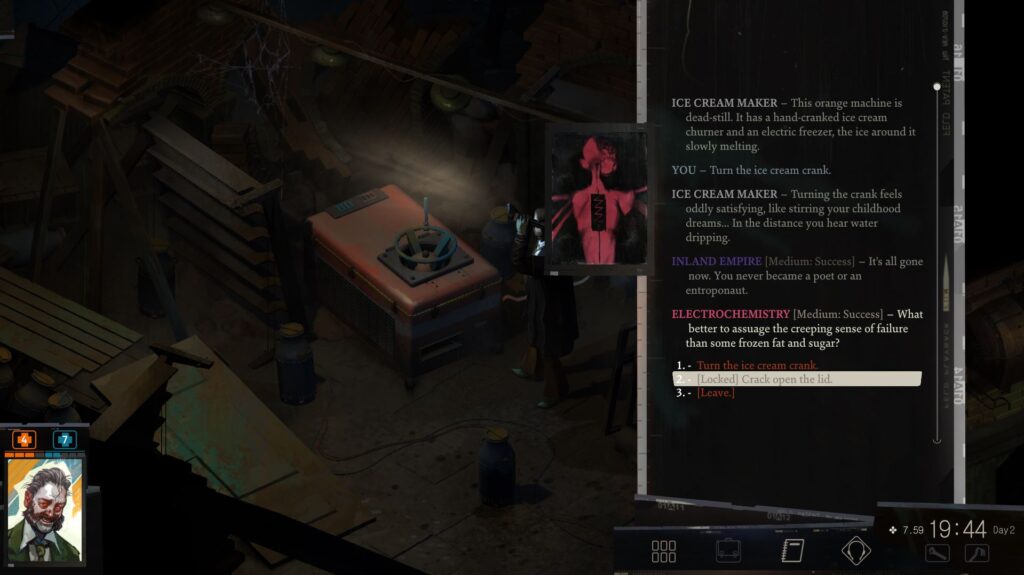 When you start the game, you’re given three different options for your character. Are you a bruiser who can handle any physical challenge he’s put up against? Are you an intellectual who can look at a crime scene and immediately piece together what happened? Are you something of a psychic sensitive who intuits the universe and picks up what’s going on through the undervibrations of the hum of the world? 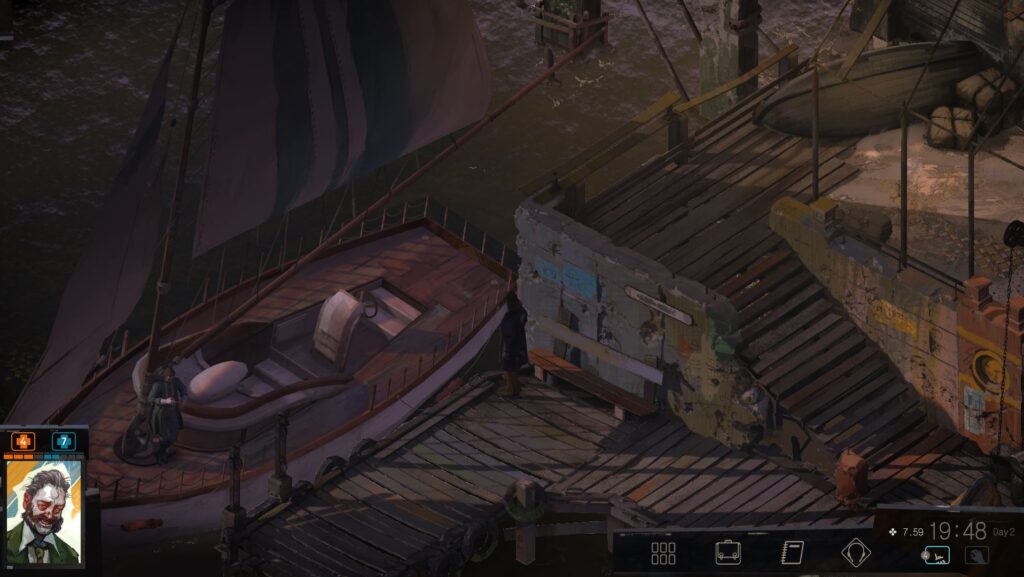 One of the interactions you have with the game is a dream about the murdered guy and you go to the scene of the crime and have a conversation with him. He gives you some hints about what REALLY happened. And, the next day, you can use that information to piece together some more about the murder. Holy cow, I thought. This is like if David Lynch made a video game.

Along the way, you meet many different characters and several of them are within yourself. I’ve mentioned the conversation with your limbic system, but you’ve got a lot of different aspects and many of those are going to talk with you (or to you). The Shivers gives you insight into the psychic currents flowing around you. Inland Empire is your gut but also the “dreams in waking life”. Electrochemistry gives you insights to the various chemical substances you encounter in the game. Esprit de Corps gives you insight into the cop culture that you only recently re-realized you’re part of. 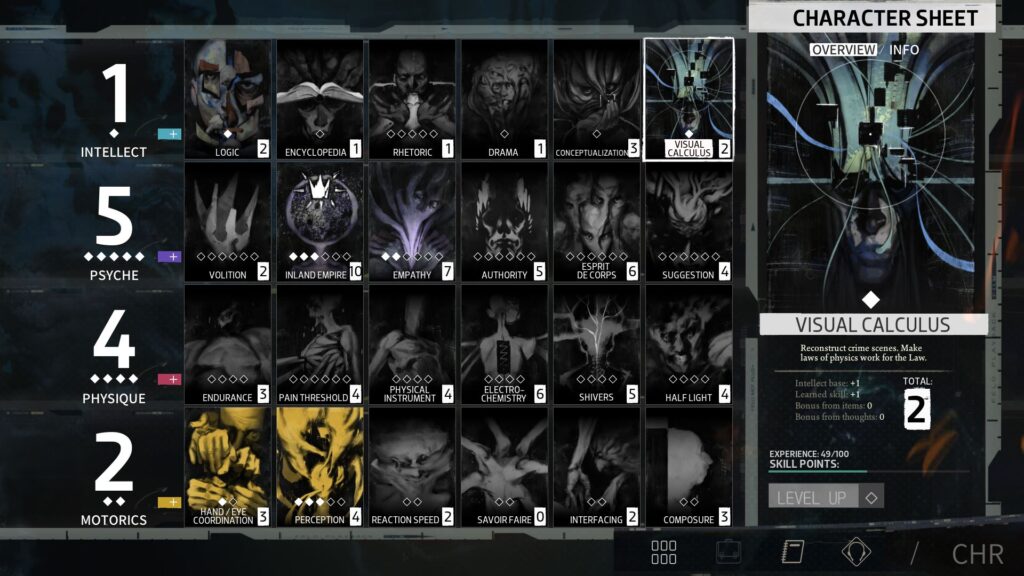 And you dig and dig and uncover more mysteries on top of the old mysteries that you started with. Along the way, you encounter and can adopt new philosophies that help how you interact with the world. Derealization, Rigorous Self-Critique, Mazovian Socio-Economic Theory. These help you learn and figure other things out. 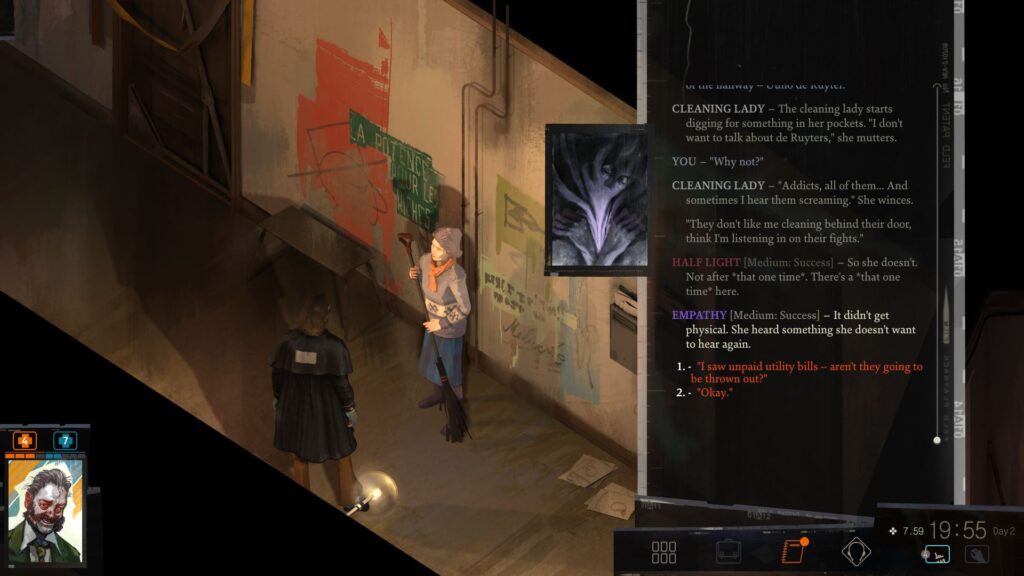 What happened with the murder? What REALLY happened? What is the world you’re in? Who ARE you?

Oh, and you find out why it’s called “Disco Elysium”.