The Need Is For Light

Over 30 years ago, I picked up a Patricia McKillip book, Fool’s Run in, I think, an airport book shop. McKillip is highly regarded in the fantasy genre; she’s been writing for 46 years and as far as I can tell all her work is still in print. Fool’s Run was a rare foray into science fiction. 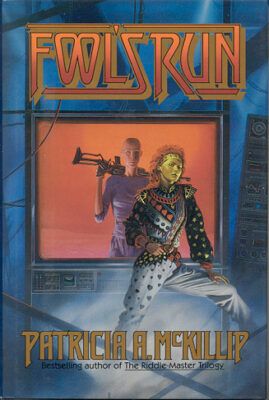 I still have that copy, bought the year my son was born, and found it easily Wednesday night. It has survived the periodic purges that let me escape the “hoarder” tag, by keeping my eclectic collection of books to just 500 or so. I reread it every couple years. Like all McKillip books, Fool’s Run has well-drawn characters with close, believable relationships, always more interesting than the central love story. In my twenties, the primary narrative of a rock band on space tour was the main attraction, but the initiating plot is quite tragic.

Terra Viridian, a conscripted soldier on an Earth run by the FWG (Free World Government), suddenly went berserk and inexplicably killed over 1500 people with a laser assault rifle in a matter of minutes. Eventually, we learn that a creature from another world, a world with a dying sun, reaches out telepathically in a psychic scream and finds Terra.

So, Terra’s mind was captured, entirely at random, across billions of galaxies, by an alien in the midst of an evolutionary panic attack, biologically driven to yearn for light. Possessed by that compulsion so great, she…made light. And went to jail for the rest of her life for the hundreds of people she unknowingly murdered while seized by that vision.

A minor work in the McKillip oeuvre, Fool’s Run is a constant nudge in my memory for that description of desperate need. I never expected to feel even the smallest echo of that drive. Then Wednesday happened. 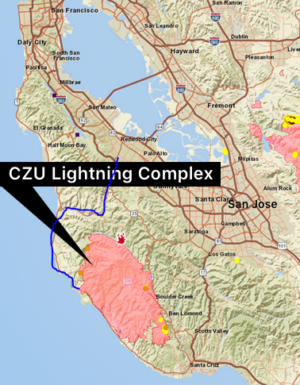 Location of CZU Lightning Complex; my drive is in blue.

I live in Redwood City, California, the midpoint between San Francisco and San Jose. On Labor Day, the heat was so overwhelming it killed the power for ten hours. Abandoning the seemingly endless classwork grading that remote learning imposes, I drove through the hills of Highway 84, skirting the CZU Lightning Complex, a relatively minor fire of several plaguing the state. I turned left at San Gregorio Beach, heading south to Pigeon Point Lighthouse. Just beyond the parking lot, people were standing with their backs to the beach, staring into the clear blue sky. Two helicopters were cycling from the dumping water and refilling at a small pond just north of Wilbur’s Watch, a popular hiking trail just a few yards from our position. (Fascinated, I took two videos of their rounds. I don’t video much, feel free to be amused at the moment you can see me realize oh, yeah, I can zoom in.)

The ocean cooled the day a good 20 degrees from the stifling heat on the other side of the mountains. My entire leisurely drive was the best memory of the weekend, but looking back what stands out now is the sky.

Two days after my beach jaunt, I went out at 8 am to the espresso shop. Teaching from home has many aggravations, but on the plus side my day is a series of leisurely hikes: a 2-mile round trip for coffee in the early morning, taco at the food truck right after school, grocery store for dinner shopping.

The sky was odd, but not yet unsettling. A Brentwood mom’s photo captured what I didn’t yet think to try.

By my first class of the day, our school’s second, at 9:20, the orange was far deeper, and my living room, always low light in the morning, was so dark I had to turn on two lamps just so my students could see me in the zoom window. They are all in Fremont, across the bay, but we all had the same conditions. A couple students said they’d tried to take pictures, but the results looked almost normal, nothing like the weird color imbuing everything we saw.

Work buddy Blake is shacked up with his girlfriend rent-free in Oregon while he zooms in to teach in California at Bay Area salaries. Only fair, really, that he’s thirty miles from the Medwin fire with his go-bag packed for evacuation. We exchanged pictures of our orange skies, but again, my phone let me down. My front yard was much deeper and darker than it appears in this shot.

My school schedules an hour-long “office hour” for students to ask teachers about their asynchronous work assignments. All my classes are synchronous, so my time is currently free through office hours and lunch. Eventually I’ll use office hours for club advisories. With 90 minutes to kill, I mulled plans for a chuck roast I’d unceremoniously dumped into the oven the night before, at low heat with some homemade tomatillo sauce. The chuck was tender and tasted fine, but still too tough for sandwiches. I’m no purist; while slow roasting wasn’t exactly the 8 hours of marinade that beef machaca calls for, simmering the beef in a broth with tomatoes, peppers, limes, more tomatillos and a few other flavors until dry would hide any differences and shred nicely.

Running out to the garden, just watered five hours ago, I was stunned to see my tomato and pepper plants dripping, the ground around them still soaking.

Years ago, I was on a business trip in Boston and my co-worker, Bill, came down for breakfast, chuckling. “Weirdest thing. Last night I spilled water on the bathroom counter. This morning–it was still there!!!” Water doesn’t wait around much in California. My garden should have been mildly damp at 11:30, not soaked through. I took the fresh produce, dumped it all in a Dutch oven with the chuck roast, and left it on low.

During afternoon classes, I mentioned to my students we had the plague, now we’ve got dark skies–all we needed was locusts.

Again, reality was a lot darker than my camera captures.

“How crazy is this?” Daniel marveled, waving his hands everywhere. “Cars have had their headlights on for a couple hours now! It’s insane!”

I put in my order and went ahead a block to Starbucks; the store was as crowded as social distances allowed so I waited outside until my drink came up. The tiny parking lot behind the building, away from the lights of the road, was very nearly pitch black.

The math department meeting started at 3, so I zoomed in to listen while I walked home. Stephanie, another colleague, was walking to volleyball practice but from the video, with her mask and hair all bundled up, she could have as easily been on some far-off planet.

Blake and I zoomed after the meeting to discuss the clubs we’re running and exchange some teaching tips. For dinner, I headed off to Key Market, a bustling independent grocery store a mile away to pick up onions and cilantro. At sixish, the sky was little darker than it had been when I went out for tacos. But this is a long walk, and I had plenty of time, finally, to mull my disorientation and discomfort.

Sure, it was dark. And orange. But why didn’t my eyes adjust? Every time I looked around, I had this strange sense of hyper-awareness. Nothing was fuzzy. Everything was sharply outlined. And everything just looked….wrong. Suddenly, I had a jolt of recognition that made all the discomfort worthwhile.

There is a need for light.

I wasn’t Terra. I was the alien, looking through Terra’s eyes. The reaction wasn’t just discomfort, it was an almost evolutionary sensation of wrongness. My body wasn’t designed for this form of light.

The dry science behind it all is explained by Rayleigh and Mies scattering. The clouds creating the condition are pyrocumulunimbus, but we’ve had those before–most recently, when schools shut down for a day because of air quality concerns due to the Camp fire. That sky simply looked normally overcast, though. This time, the clouds seem to be interfering with light rays and distorting the colors that reach us.

“These smoke particles scatter blue light and only allow yellow-orange-red light to reach the surface, causing skies to look orange.”

To my conscious self, the sky just looks orange. But my body senses the missing colors and feels what my brain doesn’t register. 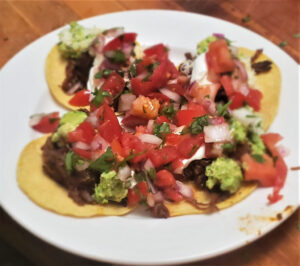 Which is not to say I was just a laser assault rifle away from killing 1500 people. But it was a real gift that the book, and the author, gave me, explaining or (forgive me) contextualizing the deep unease that seemed excessive for a sky that was temporarily a different color. As a bonus, my insight allowed me to feel, in some small way, the lack McKillip described in the alien and Terra’s link, as opposed to just logically accept it.

How often do we get the chance to link our discomfort with an apocalyptic orange sky to a decades-old sci-fi novel? I was content. Went home, made pico de gallo, and had myself a splendid dinner before several more hours of reviewing student work.

Thursday morning, on my first coffee walk, smoke was noticeably thicker, but the color was normal. After school, I went out for the taco run and remembered to capture the light. Then I noticed the ash on my car.

After school, I went out for the taco run and remembered to capture the light. Then I noticed the ash on my car.

Noah Smith, a San Francisco writer, snarked that many Californians felt better with the more familiar overcast skies with a high (Bad) air quality index. Yes. Most of us are probably much more comfortable with an overcast sky with high particulate than with an orange sky of sparkling clean air. Score one for atavism.

The skies are still overcast, four days later, and the weather blissfully cool. I worry a bit about my garden, but otherwise, one of the nice things about flatland life is the fires won’t get you. But eventually, the taxes to pay for them will.

Michele Kerr lives in California, for her sins.