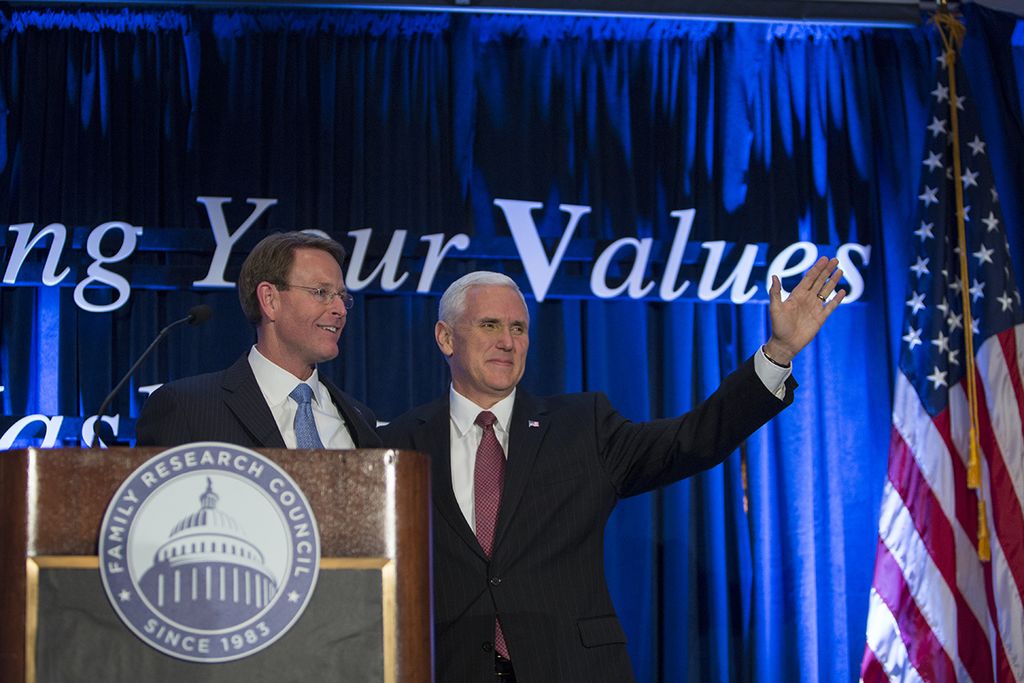 Conservatives spend a lot of time asking themselves; how did we get there? The answers are plentiful, from economic change to media proliferation. But what about the evangelicals? The evangelical presence among elected officials remains small, but evangelicals make up a sizable portion of the Republican electorate, especially in deep red states. Evangelical support was tricky at first. Polling data suggested that Republican voters who regularly attended church preferred Ted Cruz by a notable margin. It was only when Donald Trump secured the Republican nomination that evangelical voters moved en masse to support the man who once bragged that the “great” Norman Vincent Peale had once been his pastor. For the record, the number of evangelical pastors who have positive thoughts about Peale is roughly equal to the number of people who are satisfied with their degrees from Trump University.

Nevertheless, Trump made all the right overtures on abortion, religious liberty, and federal judicial appointments, and his position vis a vis Hillary Clinton left evangelicals feeling that they had no other option but to support the Republican nominee. Again, even many Never Trump conservatives were willing to tolerate the transactional argument that many voters – evangelicals included – made in 2016. The question at this point is this: why haven’t evangelicals broken up with Trump, given his many foibles and missteps?

The explanation lies in the fact that most evangelical voters are not conservative, at least not in the traditional sense the term is understood. They are not Burkeans, nor Kirkian traditionalists, nor Buckleyite fusionists. That may be true of a handful of pastors, theologians, and lay people (it was true in my home – my late father, a Southern Baptist pastor, introduced me to Mona Charen, George Will, and William F. Buckley), but not the rank and file. Instead, they are religious populists. The average evangelical voter did not come to the conservative movement or the Republican Party via National Review or Firing Line, and today, they are not kept abreast of conservative thought and policy via the usual print outlets like NR, Commentary, the American Conservative, or the late, lamented Weekly Standard.

Perhaps it’s unfair to criticize a working-class Baptist family for not reading John Podhoretz each month, but that’s not the point. Ideas are formed somewhere, and if evangelical political thought wasn’t formed within the broad swath of the conservative press, where was it formed?

Evangelical political thought was, and is, formed through talk radio, cable television, and parachurch organizations like Focus on the Family, the Family Research Council, and the American Family Association. In his recent book The Radio Right: How a Band of Broadcasters Took on the Federal Government and Built the Modern Conservative Movement, the Cato Institute’s Paul Matzko details how talk radio from the 1960s onward grew the conservative movement beyond the intellectual class. It wasn’t the luminaries at National Review and other assorted outlets that turned millions of voters towards the Republican Party. In Matzko’s telling, it was radio hosts like Billy James Hargis and Carl McIntire who developed popular radio followings by espousing a loosely evangelical anti-Communism during the 1960s. As the moral majority grew in the post-Nixon years, it set the stage for voices like Jerry Falwell, Pat Robertson, James Dobson of Focus on the Family, and Donald Wildmon of the American Family Association. Today those voices are found on cable television and social media, with the presence of megachurch pastors always lurking in the background.

With their emphasis on the inerrancy of Scripture, evangelicals like to think of themselves as a people of the Book. In truth the overwhelming emphasis is not just on the Bible, but the act of preaching within the church service itself. It is the sermon that takes priority over all else. That’s nothing new in Protestantism; the Reformers placed a very high importance upon the public proclamation of God’s Word. What is different for evangelicals over the last one hundred years is the combination of urgency and apocalypticism. On its own, urgency isn’t anything novel — the Puritans and the Wesleys all preached the need to repent and believe right now. It’s the apocalypticism that really turns many evangelical voters into populists.

Twenty years ago American bookstores were teeming with copies of the Left Behind series, a set of novels based around the eschatological notion of premillennialism — the idea that Jesus Christ would return at any minute to rapture His Church, leaving behind an unsaved world plunged into chaos before Christ’s final return after seven long years. It is a compelling narrative, but as a theological concept, it’s relatively new. This notion of the end times only dates back to the late 19th century, but it spread rapidly and became one of the defining markers of fundamentalists and evangelicals in the 20th century. (Confessional Protestants remain skeptical of the idea). More importantly, premillennialism gave teeth to a long-standing Christian concern that the end of time is imminent, and earthly matters take on greater intensity.

Conservatism shared that urgency during the Cold War. But as communism subsided, intellectual conservatives recognized that many policies were in flux, being pushed and pulled during each successive Congressional term. The exception to this rule is the federal judiciary, where lifetime appointments mean that a united Senate and White House have the power to shape the national’s legal system for a generation. Once evangelical voters understood the gravity of the judiciary, especially in relation to abortion and, more recently, religious liberty, apocalyptic urgency took over.

Long before Donald Trump became the face of the Republican Party, evangelical leaders took issue with the Democratic filibuster of judicial appointments. The 2005 Justice Sunday initiative from Focus on the Family and the Family Research Council was led by James Dobson and Tony Perkins, and featured bright evangelical leaders like Chuck Colson and Al Mohler. The theme of this event is familiar to observers today; people of the Christian faith are under attack, and the party that appoints federal judges has the power to radically shape the nation’s trajectory. While most evangelicals might prefer one of their own to be the executive who oversees such a project — a hope that flamed out under George W. Bush — the executive vehicle for such a mission remains secondary to the ultimate goal, hence the lack of concern with all of Donald Trump’s personal foibles.

Leaving aside the novelty of premillennial theology, one of its chief flaws is that it becomes an ideological lens for viewing all of the Christian life, from the study of Scripture to the view of history itself. It leaves the believer incapable of evaluating things on their own terms, preferring instead to fixate on a narrow interpretation of doctrine at the expense of a wide swath of Christian experience. Thankfully this theology has begun to wane even in many evangelical circles, but the apocalyptic impulse remains and many evangelical leaders still possess a Flight 93 outlook that compels them towards certain political conclusions, making them ripe for exploitation at the hands of the populist demagogues that fill the media, the White House, and far too many pulpits.

The post-Trump era will begin soon, either with a Biden victory in 2020 or a lame duck second term. As conservatives and Republicans look for a way forward, they must reckon with the fact that one of the GOP’s most significant voting blocs is committed to conservatism only to the extent that it lines up with prior religious convictions, and those convictions often do not expand far beyond abortion and religious liberty. Populism struggles mightily with the conservative view of restraint, both in terms of political rhetoric and governance itself, and evangelical populists are no different