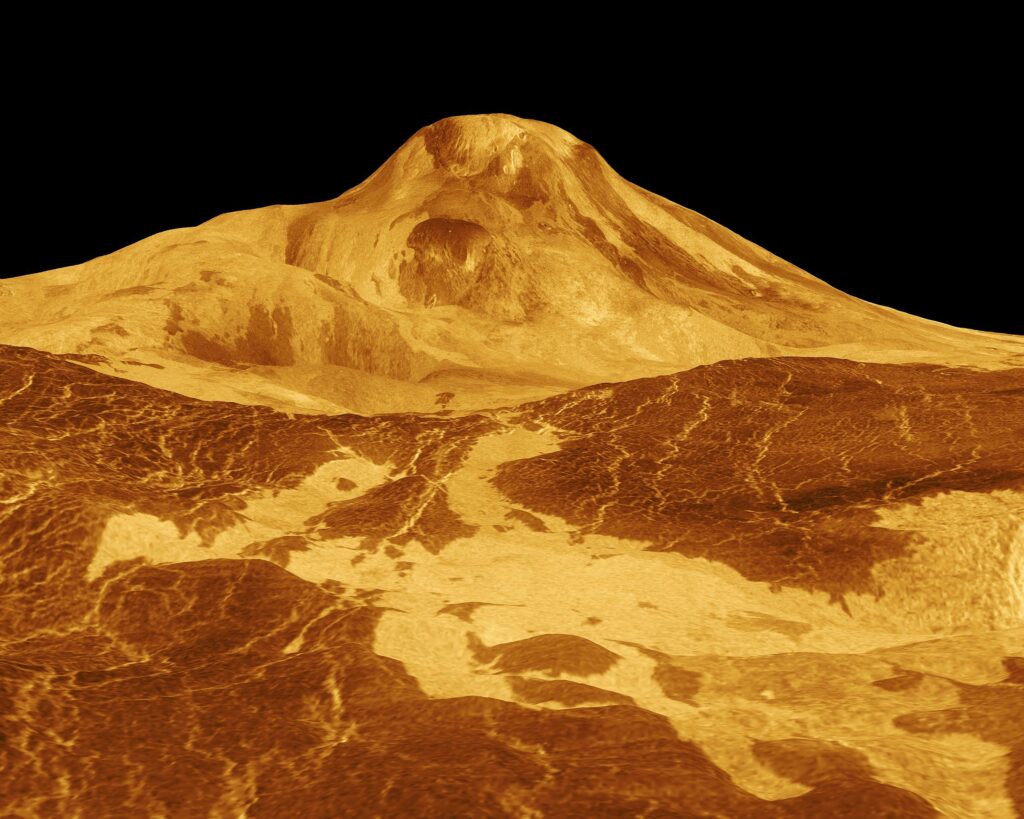 Maat Mons, a massive volcano on Venus, as seen by the Magellan mission.

A few weeks ago, I mentioned the possibility of life being detected not in the usual suspected locations but in the clouds of Venus. While Venus’s surface would be incredibly inhospitable to life — a runaway greenhouse effect has produced a choking carbon-dioxide atmosphere with nearly 100 times Earth’s pressure and a temperature of nearly 900 degrees — there could be life in the more temperate cloud regions, where temperatures and pressures are similar to those of Earth.

Well, this week the internets exploded with reports of a possible detection of life on Venus. Well … kinda. Phil Plait goes in depth on the discovery. What the scientists actually detected was a chemical called phosphine. While we see this chemical in other planets of the Solar System, the atmospheres of rocky planets like Venus aren’t quite hot enough to create it. Venus doesn’t have anywhere close to the geological activity that would be needed to produce phosphine. And there are very few other chemical pathways by which phosphine can be manufactured. Moreover, phosphine decays quite rapidly so it must be constantly refreshed to be detected at this level.

There is one way phosphine can be created, however, that has not yet been ruled out: microbial life.

Now the authors of the papers are appropriately cautious, noting that life is just one possible explanation. It is also possible that there is a geological or chemical process going on that we don’t understand. In particular, the paper I noted above talked about how winds might waft microbial life back up into the clouds to keep the biosphere going. A similar process could be feeding unexpected chemicals into those clouds. And even the detection of phosphine is based on a single spectral line. We’d like to see more detections.

My bet is on a chemical or geological process. But until we’ve explored all the possibilities, we won’t know for sure.

I’ve said before that I think we will eventually find evidence of microbial life in our solar system — if not actual microbes then the fossils of them. And while that’s not as exciting as little green men, such a finding would hint that life is common in our universe — at least the beginnings of it. And that would be a big step toward figuring out that we are, indeed, not alone out here.