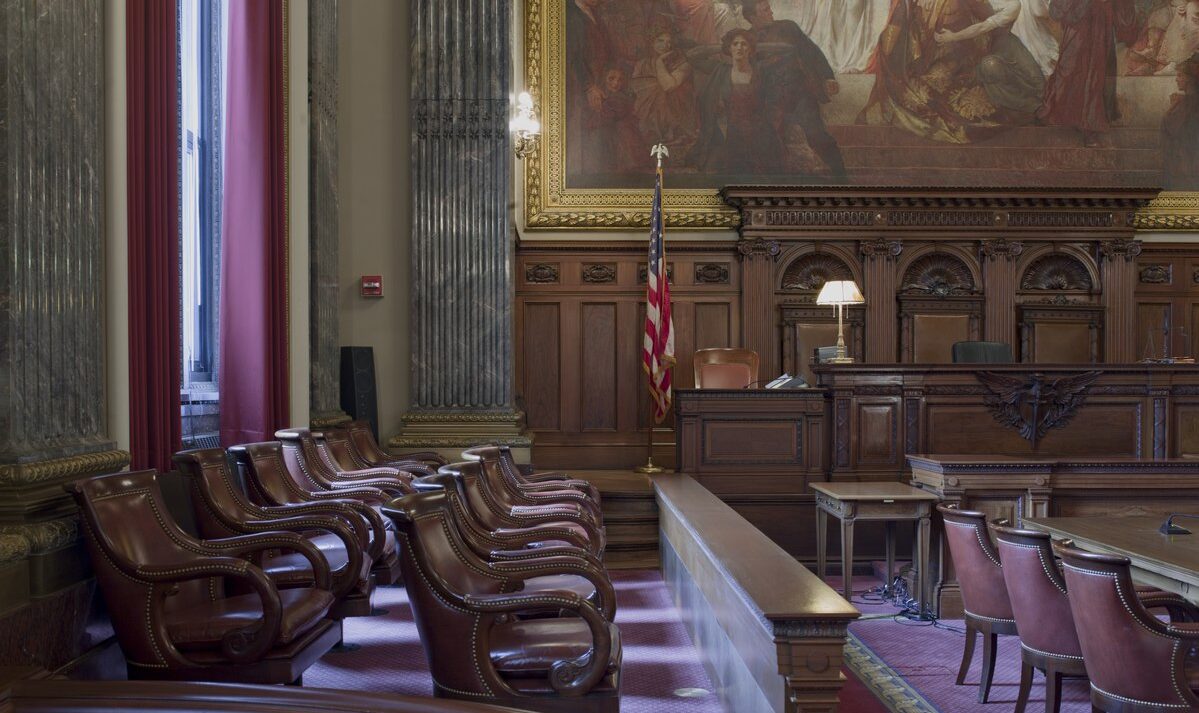 [WW1]When one has a legal matter, one takes that matter to a court which has original jurisdiction over the case. Usually, that would be your local trial court or perhaps your federal district court. In these venues, you are normally entitled to a jury trial; in federal court, you are guaranteed such by the Seventh Amendment. This goes for all federal courts with original jurisdiction, including the Supreme Court of United States. However, as we know, SCOTUS does not have jury trials.

But it did once.

In fact, it may have done so at least three times, though only one case was reported. Our case of the week is the only known such trial to be held before the United States Supreme Court: State of Georgia v. Brailsford.

We think of the Supreme Court as the court of last resort, the last place one can go when all other avenues of justice have failed to deliver. It is the ultimate appellate court. However, there are a few types of cases over which the Court has original jurisdiction, by dictate of Article III of the US Constitution:

The language of Article III, Section 2 which addresses the high court’s original jurisdiction is more restrictive than this list would suggest:

Georgia v. Brailsford is a fairly boring case, as far as subject matter: A citizen of the state of Georgia named James Spaulding owed a debt to Samuel Brailsford, a British subject. Brailsford sued Spaulding in federal court over the debt, which had been incurred in 1774. The state of Georgia attempted to intervene. The state had enacted a legislation years prior which “sequestered” all debts owed to British creditors, making them due to the state instead. Subsequently, following the Revolutionary War, the Treaty of Peace was signed, which included protections for British creditors: “Creditors on either Side shall meet with no lawful Impediment to the Recovery of the full Value in Sterling Money of all bona fide Debts heretofore contracted.” The state argued that its law had predated the treaty, that the sequestration of the debt was not reversed by the treaty, and that the state, not Brailsford, was the party owed. The federal court dismissed the petition, finding that allowing the state to interplead and become a party would remove the court’s jurisdiction, and further that sequestration only kept the debt in the care of the state but did not remove Brailsford as the creditor. Furthermore, the court found that the Treaty did supersede the statute.

This is when Georgia took the matter to the Supreme Court, not on appeal but by invoking its original jurisdiction over cases in which a state is a party.  The filing was a “bill in equity”, as opposed to a common law action, under the theory that there was no common law that would provide relief. Brailsford argued that the law did provide a remedy, through the Treaty, and that no suit in equity was proper. The Court, led by Chief Justice John Jay sided with Brailsford. Georgia was advised to file suit under common law the following term, and ordered that there be no payment of the debt until the matter was resolved.

Georgia filed the suit before the Court under common law as advised. The Court then convened a “special jury” to hear the facts and render a decision. The jury pool consisted of 48 men, solely merchants, from which 24 names were struck by the parties. The remaining two dozen were brought into the Court, and winnowed down to 12. The first and only reported jury trial in the history of the Supreme Court began.

The parties stipulated to the facts, so the jury had two questions to answer: 1)When Georgia “sequestered” the debt, did it vest in Georgia at that time? and if it did, 2)was that vesting voided by the Treaty of Peace? The answers would have significance in matters of state sovereignty and the supremacy of a treaty entered into by the United States.

On behalf of the federal government, US Attorney General William Bradford argued that there is a difference between sequestering and confiscating, both words which appear in the Georgia statute. Had the debt been confiscated from the enemy, it would have belonged to Georgia, but since the state itself said the debt was sequestered, it was merely held for safekeeping.

The lawyers argued in front of the jury for four days before Chief Justice Jay gave the jury charge. As part of the instructions, Jay stated that the justices unanimously agreed that the debt was sequestered, not confiscated, and that the Treaty of Peace gave Brailsford the right to attempt to collect the debt. However, Jay told the jury that despite the Court’s opinion, the jury had the right to decide both the facts and the law:

It may not be amiss, here, Gentlemen, to remind you of the good old rule, that on questions of fact, it is the province of the jury, on questions of law, it is the province of the court to decide. But it must be observed that by the same law, which recognizes this reasonable distribution of jurisdiction, you have nevertheless a right to take upon yourselves to judge of both, and to determine the law as well as the fact in controversy. On this, and on every other occasion, however, we have no doubt, you will pay that respect, which is due to the opinion of the court: For, as on the one hand, it is presumed, that juries are the best judges of facts; it is, on the other hand, presumable, that the court are the best judges of law. But still both objects are lawfully, within your power of decision.

One of the interesting aspects about the Brailsford jury is its makeup. In his Yale Review article from which I drew these details, Lochlan Shelfer dug deep to learn about the men on the list of potential jurors. 95% of them were merchants. Merchant juries were not uncommon in the time, according to Shelfer. He notes that the arguments made by Brailsford’s lawyer seemed to be tailored for a jury of merchants, emphasizing mercantile law and custom and pointing out that a verdict against Brailsford would negatively impact other merchants, arguing against violating “the faith of Commercial intercourse.”

After the Brailsford case, the Supreme Court impaneled juries at the beginning of its next several terms. The famous case of Chisholm v. Georgia, the case which allowed a state to be sued by a citizen of another state and prompted the 11th Amendment, was almost heard before a jury, but they were dismissed at the last minute. The Court would use a jury again in an unreported case in 1795, and again and for the last time in another unreported case in 1797.

In the next century, the Court would itself act as fact finder when necessary, and in modern day the Court appoints a “special master” to do so. By and large, however, the Court has managed to avoid the need for or use of a jury for the last 220+ years. The closest they may have come was in 1981, when the state of California attempted to sue the state of West Virginia for breach of contract when the latter allegedly broke an agreement to play a football game. Being a suit between two states, the Court would have been exercising its exclusive original jurisdiction, but they refused to hear it. Justice Stevens dissented, arguing that the Court was shirking its constitutional duties by refusing to hear a case over which it had original, exclusive jurisdiction. However, if California’s suit had requested monetary damages rather than equitable relief, had the Court accepted it, the 7th Amendment may have obliged the seating of a jury.

[WW2] Good news everybody! It’s no longer illegal to sag your pants in Opa-Locka, Florida.

[WW3] A group of deans from ABA-accredited law schools in California have asked the California Supreme Court to change its online October bar exam to an open-book format with no remote proctoring.

[WW4] An Idaho-based McDonald’s franchisee has been ordered to pay $50,000 for violating child labor laws at 11 restaurants located throughout the state, the U.S. Department of Labor announced.

[WW5] A Colorado law aimed at protecting workers and students from discrimination against race-based hair traits went into effect Monday. The law, also known as the “CROWN Act” was passed by lawmakers in March and aims to prevent hair-related discrimination in public education, employment practices, housing, public accommodations and advertising.

[WW6] That new California law designed to allow inmate firefighters to expunge their records and thus allow them to get jobs as firefighters after prison is far more limited than advertised.