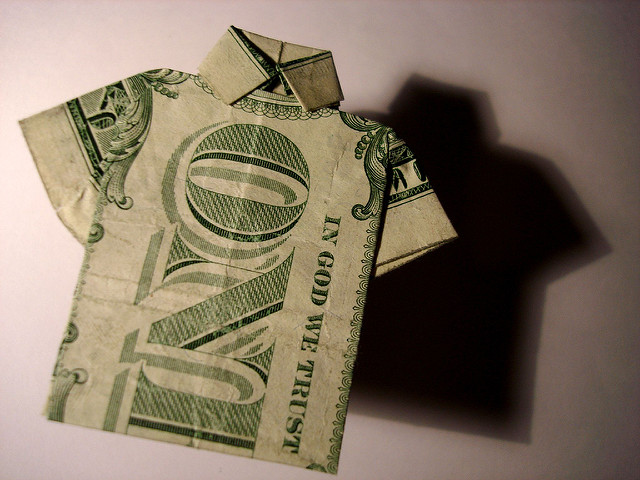 One-dollar bill shaped as a shirt.

A common question for academic discussion is “If you can only understand two things about a subject, what should those two things be?” This is invariably applied to economics. My answer? “Incentives matter” and “there are information differences between people.” The latter is pretty self-explanatory but is a topic most central planners refuse to recognize. Information differences tie into everything people do in a capitalistic economy. How an individual values a good or service being the most prominent. Two people go to the store. One values the premium salad dressing at $10.00, so sees the $8.00 price tag as worth it. Another values it at $5.00, so instead buys the Kraft brand for about $4.00 instead. This is also situation specific. Say you go for a walk, one in 90 degree weather and another in 40 degree weather. Your valuation of a bottle of water could be multitudes higher after that 90 degree walk. You’ll pay the $5.00 for the water from the hot dog cart when you likely would not after the 40 degree one.

An incentive is a thing that motivates or encourages people to do something. Incentives tie into many things, from the Law of Unintended Consequences to couponing. A BOGO sale on sneakers may encourage you to purchase shoes earlier than you were originally planning, as the sale ends next week. A surfeit of wolves in Alaska increases the demand for helicopter wolf hunting (yes, a real thing that exists and is awesome.) A government policy that is intended to alleviate poverty by granting more money to unmarried mothers leads to an explosion of out of wedlock births. That last one is a perverse incentive. A perverse incentive is essentially an encouragement to do something that is against what the person or institution causing the encouragement sees as desirable. Government is usually the originator of most perverse incentives, as this specific type rarely gets reigned in. They fester for decades, causing problems on top of problems. When a business recognizes a sale or deal it is offering is causing the opposite of what was intended, such as losing a lot more money than what was in the original scope of the deal, the business will just pull the promotion. Bureaucrats rarely have such foresight or hindsight as the government doesn’t go under. Bureaucrats are not accountable to anything approaching shareholders or creditors.

The biggest reason why these perverse incentives do not get fixed is because, usually, the bureaucrats and the supporters of the original policy will tie themselves into knots to avoid admitting the policy is the cause of the problem the perverse incentives encouraged. To take the welfare example, the people who point out the obvious get called all kinds of names, from heartless to racist. And the problem continues to fester. Poverty in America is an interesting beast. Most households, even those below poverty, have various luxuries that even the richest Americans didn’t have fifty years ago. Central air, a smartphone, high-speed Internet, cable TV, an HD television, a Blu Ray player, a personal computer, a washing machine and dryer, a dishwasher, and one or more vehicles are all incredibly common, even among those in poverty. Hell, more than 70% of U.S. households have Amazon Prime. One of the biggest problems facing the impoverished in America is not hunger but obesity. Our poor are too fat! That would boggle the mind of people in virtually any other time period in history. “Solitary, poor, nasty, brutish, and short” was the average human experience for a majority of our existence. Capitalism has led to exponential growth in the standard of living and technology. Something that was considered a rarity outside of the richest thirty years ago is likely standard for most households today.

The key to successful government policy is through perverse incentive mitigation, usually through the Law of Unintended Consequences. Ask detractors of the policy you favor to explain bad things that could result from it. Use those criticisms to make the policy better. This is particularly why I am opposed to massive bills. Obamacare was an insanely complicated bill, hundreds of pages long. Such omnibus bills will inevitably cause loads of unintended consequences, especially since most of the standard operating procedures of implementation will fall on unelected career bureaucrats who are largely unaccountable. Short, targeted bills are the way forward. And reducing government regulation. Do I see either of those things as likely? No, but principles sometimes fail the practicality test. It is still a good idea to have them nonetheless and to work toward the difficult task of making the impractical but righteous policies practical over time. Someone unmoored by principles is among the worst people to put in power.

Unfortunately, that seems to be most elected politicians…