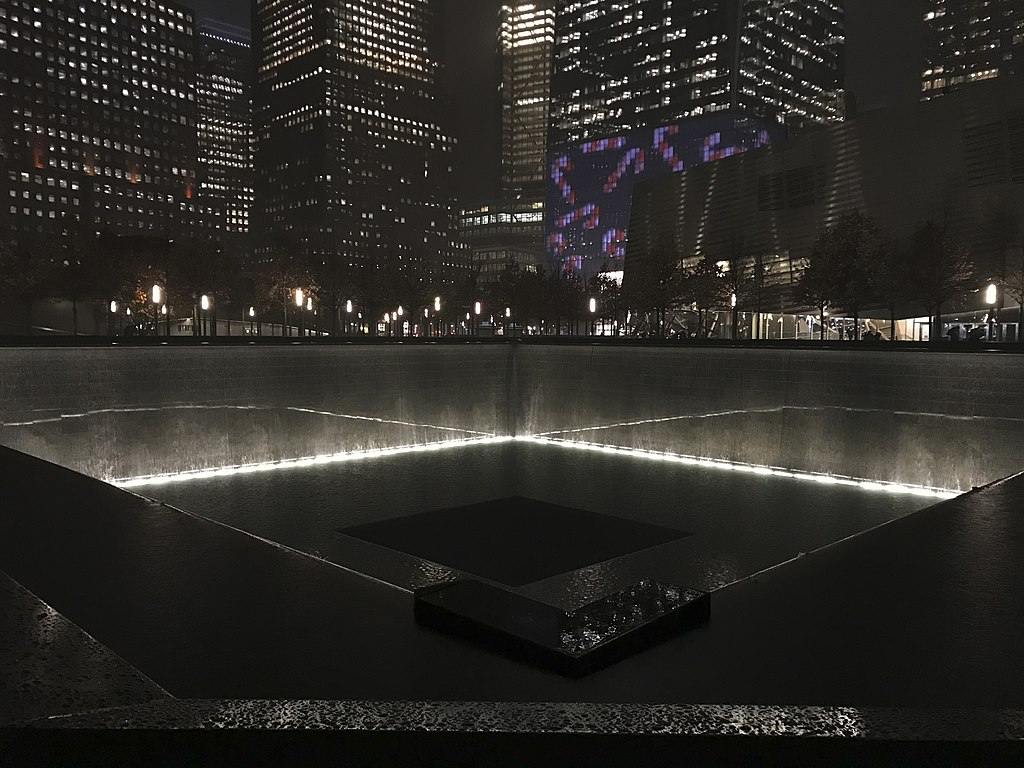 9/11 Memorial on a Rainy Night. Photo by Billie Grace Ward via Wikimedia Commons

The Falling Man: An unforgettable story by Tom Junod, published Sept 9, 2016 in Esquire:

They began jumping not long after the first plane hit the North Tower, not long after the fire started. They kept jumping until the tower fell. They jumped through windows already broken and then, later, through windows they broke themselves. They jumped to escape the smoke and the fire; they jumped when the ceilings fell and the floors collapsed; they jumped just to breathe once more before they died. They jumped continually, from all four sides of the building, and from all floors above and around the building’s fatal wound. They jumped from the offices of Marsh & McLennan, the insurance company; from the offices of Cantor Fitzgerald, the bond-trading company; from Windows on the World, the restaurant on the 106th and 107th floors—the top. For more than an hour and a half, they streamed from the building, one after another, consecutively rather than en masse, as if each individual required the sight of another individual jumping before mustering the courage to jump himself or herself. One photograph, taken at a distance, shows people jumping in perfect sequence, like parachutists, forming an arc composed of three plummeting people, evenly spaced. Indeed, there were reports that some tried parachuting, before the force generated by their fall ripped the drapes, the tablecloths, the desperately gathered fabric, from their hands. They were all, obviously, very much alive on their way down, and their way down lasted an approximate count of ten seconds. They were all, obviously, not just killed when they landed but destroyed, in body though not, one prays, in soul. One hit a fireman on the ground and killed him; the fireman’s body was anointed by Father Mychal Judge, whose own death, shortly thereafter, was embraced as an example of martyrdom after the photograph—the redemptive tableau—of firefighters carrying his body from the rubble made its way around the world.

From the beginning, the spectacle of doomed people jumping from the upper floors of the World Trade Center resisted redemption. They were called “jumpers” or “the jumpers,” as though they represented a new lemminglike class. The trial that hundreds endured in the building and then in the air became its own kind of trial for the thousands watching them from the ground. No one ever got used to it; no one who saw it wished to see it again, although, of course, many saw it again. Each jumper, no matter how many there were, brought fresh horror, elicited shock, tested the spirit, struck a lasting blow. Those tumbling through the air remained, by all accounts, eerily silent; those on the ground screamed. It was the sight of the jumpers that prompted Rudy Giuliani to say to his police commissioner, “We’re in uncharted waters now.” It was the sight of the jumpers that prompted a woman to wail, “God! Save their souls! They’re jumping! Oh, please God! Save their souls!” And it was, at last, the sight of the jumpers that provided the corrective to those who insisted on saying that what they were witnessing was “like a movie,” for this was an ending as unimaginable as it was unbearable: Americans responding to the worst terrorist attack in the history of the world with acts of heroism, with acts of sacrifice, with acts of generosity, with acts of martyrdom, and, by terrible necessity, with one prolonged act of—if these words can be applied to mass murder—mass suicide.

In most American Newspapers, the photograph that Richard Drew took of the Falling Man ran once and never again. Papers all over the country, from the Fort Worth Star-Telegram to the Memphis Commercial Appeal to The Denver Post, were forced to defend themselves against charges that they exploited a man’s death, stripped him of his dignity, invaded his privacy, turned tragedy into leering pornography. Most letters of complaint stated the obvious: that someone seeing the picture had to know who it was. Still, even as Drew’s photograph became at once iconic and impermissible, its subject remained unnamed.