Out of Horror, Change 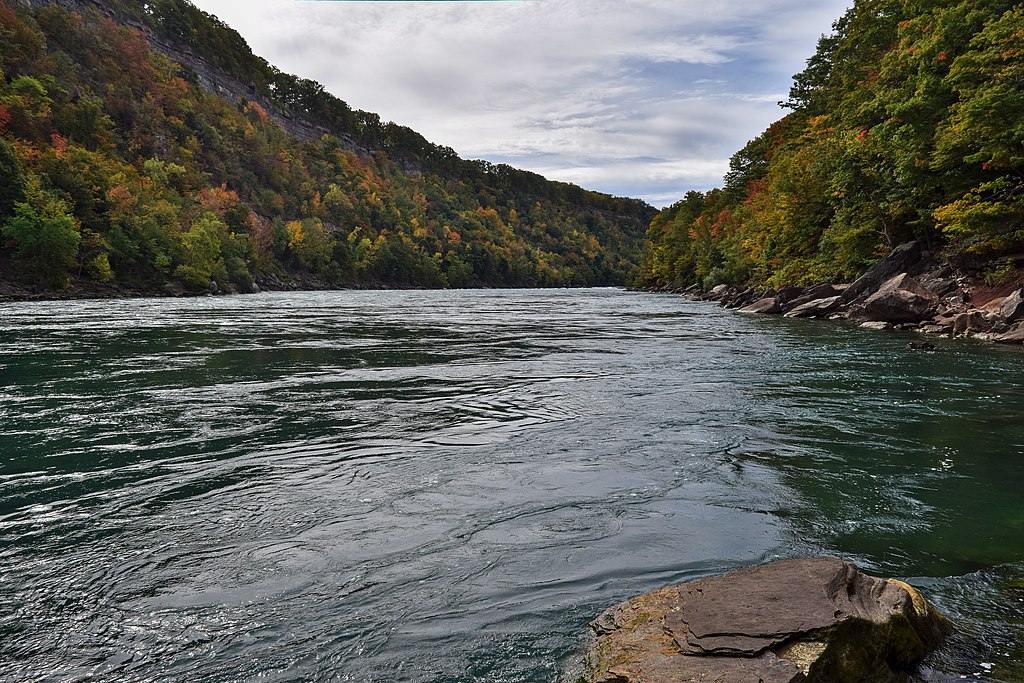 Here in Western New York, nestled between Lake Erie and Lake Ontario, abutted to the Niagara River, which tumbles over the Niagara Falls, the tensions inherent in wisdom are self-evident in the natural gifts scattered throughout the region. The roar of the Niagara Falls has gone unchanged for thirty millennia (although tweaked by the diversion of the river to reservoirs in Ontario and New York to generate hydroelectric power), the two Great Lakes themselves have witnessed all the wars fought here, and the Niagara Escarpment itself, which is a visible sign of the awesome power of erosion, has houses built upon it. The river has rushed in a line straight northward in a breathtaking vista forever, probably. Not too far from here is another river meandering southward upon a rock bed, a channel said to be older than the worn Appalachian Mountains which finally tire out just south of Buffalo City Hall. It is part of the Mississippi River drainage system.

Thus, it is true that the river runs from the middle of the continent to the sea, but the sea is never full; to the place where the river flows, there it flows again. There is nothing new. Nothing ever changes. Plus ça change…

At the same time, the Niagara Frontier is renowned for its four distinct seasons. Winter is a little long, stretching into April (though perhaps it started in November, the occasional year dominated by Winter). Nevertheless, Spring is likewise long and renewing, a refreshment while the world here runs the tumbrels off the many creek-side paths, a true reprieve from the coming judgment. The sun hangs in the Summer sky without tiring, blessing both those healthy, wealthy, and wise who rise early, as well as the late-rising, procrastinating fool. Sometime late in August, shadows begin to move to the north even during the midday, guiding the short-lived yellow jackets who are desperate to suck the marrow out of fallen apples before the deer wander off the abandoned railroad beds to pluck them from the ground. Just before Christmas, when children sing in the joy of anticipation of receiving very many ephemeral possessions, the sun struggles to be seen above the southern horizon, hugging the tops of those same remnants of the mountains, the old man shuffling through his very short days, such as they can be called daytime. Winter has returned. 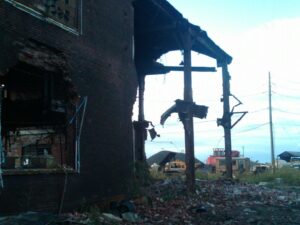 The day Donald Trump was declared winner of the 2016 election, one of the massive buildings of the abandoned Bethlehem Steel factory caught fire and collapsed in a heap. Winter came, lots of snow fell, negotiations combusted, then Spring came, bringing with it demolition equipment of many sorts, and now that building stands much reduced. Poor Woodlawn, N.Y.! The epicenter of the Buffalo economy for a few short decades, her many pubs and bars twinkling as festive lights, illuminating so many disputes, quarrels, and fisticuffs, not to mention a few domestic incidents and felonies. Who imagined that it could catch fire spontaneously? The safety regulations were devised in the shadow of the Great Lakes, but they were set in motion under that unforgiving teacher: change. Tout a une fin. Change is ever so.

So, I will ever purchase my permits, this fall as every fall. The camouflage apparel is easy enough to hang in the garage so that it takes on the smell of nature. The bow and arrow, on the other hand, take more effort because of their purpose. Six weeks after October 1st will bring out the big guns, whose purpose is frightening. We are putting on the mantle of Orion, the ancient hunter, to trample the empty places between the civilized places, and the barbarian will yawp.

Archery season appeals to me in particular for its quietness. The days are still roughly twelve hours long; an early riser need not rise so early to be first awake in the woods, and neither is the day too short to procrastinate the hunt unto a long, pleasant evening. Yet in the morning a god I am, rousing even the chipmunks from their slumber. They will begin to fill their cheeks with the fat of the land with only the slightest inclination that a human being is at hand, but because I am camouflaged in ways visual, in ways olfactory, and even in ways electrical and ultra-violet (Oh, how Boötes benefits Orion!), it is not likely the creatures of the woods will sense my presence unless I make myself known to them, which is terribly unlikely, considering my purpose.

This September, as I prepare the tools of Orion, marking each time the sun makes his shortening routine, I am confronted by that purpose. I aim to kill. “For food,” I say, at first, and I say so because this is most certainly true. A mid-sized doe provides fifty pounds of food. “For management,” I say, and I say so because this also is most certainly true. If you do not cull the deer herd, they will starve to death or contract terrible diseases, as environmental experiments continually demonstrate. “You can more easily buy a pork roast at the grocery store,” my wife is careful to remind me during those inevitable long stretches without a…what does the New York State hunting guidelines booklet call it? A harvest. Oh, those inevitable long stretches without a harvest!

Even so, just as inevitably, those long stretches come to an end, and I have successfully ambushed a member of the large game species, a doe, such beautiful eyes, or a buck, such wild innocence. The draw of the bow will draw the attention of those eyes, eyes which smash any pretense, so that there is one thought, and one thought only, answering the question of the purpose: “I’m going to kill you now.” And I do.

If you call the snap of the bow “sound,” and perhaps also the swish of an arrow flying a maximum distance of ninety feet at a rate of two-hundred and fifty feet per second, that much sound is not enough to break the rhythm of the music of the woods. And I do kill the deer, and it does die in my presence, and it is a horror.

Last year, I brought her home to meet the family, and one of my younger sons remarked on her beautiful eyes and her soft fur as she hung from a rafter in my garage. He was wondering if we could turn her fur into leather. I replied that I did not know how to do so but I would look into it. One of my older sons was with me, and he learned from me (and the internet, O Boötes! Bless you!) how to skin and butcher a deer. We brought her into the house, piece by piece, whereupon my wife began to wrap the food, first in a layer of plastic wrap and then an outside layer of butcher paper, labeling each piece with care, recording the inventory of food on a piece of notebook paper which is taped onto the top of the freezer, where the food was stored, and what remains uneaten is still there, waiting its turn. All through the time of preparation we were speaking to each other the language of a mystical union, exhausting the repertoire of vocabulary for delight, happiness, and contentment. Outside, the chill of autumn yielding to the cold of winter was unnoticed. The union of our language was keeping us warm. The food is good, too, good for you, of the wild-fed organic nature, which is supposed to have certain benefits in eating, which education is lost on me because I am eating my kill.

Out of horror came a family communion, one of the most enduringly beautiful episodes of my life, a ritual we brought into our home for the first time: together taking from the woods a life and making it into food. During those several hours, I knew that there is an end, one of each sense of the word: end, the purpose of an activity; end, the cessation of it all. I knew that there is an end. The beauty of the Great Lakes, the static rivers, the everlasting mountains—these have their majesty, a witness of inescapable perpetuity, an unbearable judgment. Even though they are immutable by us—we cannot effect change upon them, try as we might. Would you be at peace with such silence? Even though they are immutable, the beauty of change is first a horror, the writhing, serpentine figure of death setting fire and killing by almost any means a mind can imagine. Buildings rise and burn, and the people who raised them and burned them rise and perish.

There remains a transcendent beauty. How shall change come upon you? Such that you will succumb immediately, or such that you shall fight, and you shall live to succumb later? Out of horror comes a familial communion. The seas shall fill up, and the rivers shall cease; the mountains shall fall down, and the seasons shall cease. The sun shall neither rise nor set, and no buildings shall ever catch fire again. A family remains, seated, enjoying the fruits of a wide fat earth, without any more work to do.