John Kelly Doesn’t Owe Us Anything 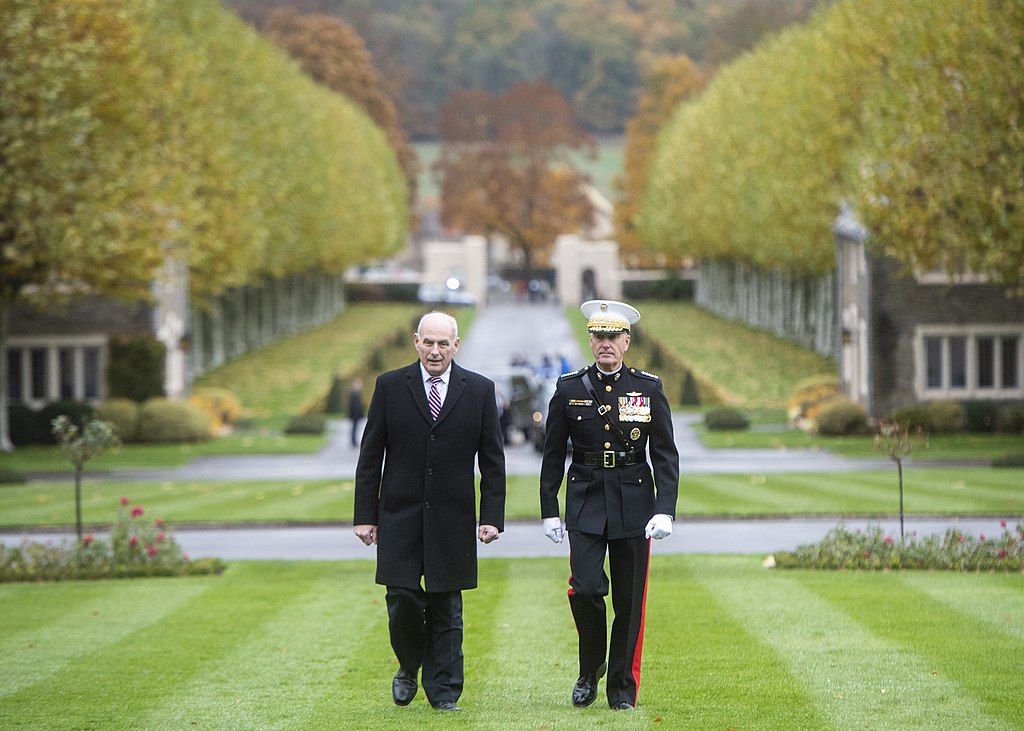 The current maelstrom surrounding President Trump and his alleged comments about troops, cemetery visits, and various related things has been brought to bear on a man who spent most of his life as one of those troops, before joining and then being jettisoned by the current administration.

“It’s Time for the Former General John Kelly to Speak Out About Trump’s Views on the Military” John Cassidy titled his piece in The New Yorker.

“General John Kelly Knows What Trump Said About Veterans — This Is Why Is He Can’t Remain Silent” declared Seth Cohen in Forbes.

So what should we make of Kelly’s silence? Ingrained habits of stoicism and convictions about duties of confidentiality and loyalty to a commander in chief, even this one, seem to be at work here. This is perplexing, to say the least. There are persuasive arguments on the other side about countervailing duties, including to warn the country about the man seeking a second term. But heroes are scarce among those who chose to serve Trump. Kelly’s tenure in “Crazytown,” as Bob Woodward quoted him in describing the Trump White House, included overseeing the implementation of the administration’s cruel policy of separating migrant children from their parents.

Nonetheless, if Kelly’s choice is silence, it is hard to interpret that as anything but tacit confirmation. If Goldberg were telling a false story about Kelly and his son, surely Kelly would offer some correction. Kelly does not often speak publicly of his son’s death, but he has done so in terms that are the compelling opposite of Trump’s transactional worldview.

“When you lose one in combat … in my opinion, there’s a pride that goes with it, that he didn’t have to be there doing what he was doing,” he said in 2016, shortly before his retirement from the military. It is precisely the selfless sacrifice that Trump is incapable of comprehending that provides Kelly with some solace.

All due respect to the redoubtable Ruth Marcus, but no, this is not perplexing in the least.

“I think we need to step back from the politics,” Kelly stated in an interview back in June. “I think we need to look harder at who we elect…I think we should look at people that are running for office and put them through the filter: What is their character like? What are their ethics?”

Things like character and ethics are best revealed over time. The latest furor over President Trump is once again centered around his character, and his conduct. Since the accusations are new twists on stories that are several years old, they are not surprising. With 73 years of very public book on Donald J. Trump, his character is open for all to see and examine. Even his own supporters, or at least the honest ones, know that paragon of virtue is not the calling card of the 45th president before or during his White House stint. If you want to know about President Trump, you have all the information you could ever need to make a decision by now.

Yet here we are again, with a slew of folks utterly convinced that one more revelation, one more headline, one more viral moment will be the silver bullet that finally ends Trump once and for all. They wish in vain, but their wishing will not be abated, and has been aimed in the direction of John Kelly. They have convinced themselves — and are trying to convince the rest of us — that the former Trump Chief of Staff can be the latest and greatest of such miracle cures to Trumpism. And if they don’t get it, that disappointment will also be John Kelly’s fault. So trapped in this moment, they demand of the retired general that they be appeased right now or else. “John Kelly will be remembered in the history books as both a shameless coward and as one of our nation’s biggest enablers of fascism” tweeted a campaign finance guy who I had to Google to figure out who he was.

John Kelly’s refusal to make himself the center of the moment is consistent with everything we know about him. The 40 plus years of service to his country both in uniform and in trying, and failing, to be an influence on the Trump Administration tell of a man who thinks bigger than just of himself. “He wants to avoid taking a position that might be perceived as political,” retired Marine Gen. Anthony C. Zinni was quoted in Annie Karni’s New York Times article on Kelly’s silence. “I also think he takes to heart the commitment to confidentiality in matters related to their interaction with the president.” That everyone from Team Biden to Bill Kristol to the Twitterati want otherwise is not a consideration. Maybe that changes. Maybe the president’s broadside against him at a Friday press conference will entice him to fire back.

But I doubt it. Frankly, if Kelly confirmed hearing what the president allegedly said at the site of his son’s grave and he didn’t resign on the spot, it would change how I think about him some. But even if it is exactly the way The Atlantic is portraying it, John Kelly was there, it was his piece of sacred ground, and his judgement was to serve on anyway. His most personal and private pain, the ultimate sacrifice of his own son, would be an unfathomable weapon to wield against someone politically from his point of view. Who the hell are we to question such a man on such a subject? We will anyway, but without a sliver of understanding of the complexities of spending your life serving the country your own son died for.

John Kelly is no saint. He is a man with flaws, just like President Trump, just like all the talking heads demanding action from him, just like you and me. But what differentiates him from the president is exactly what keeps him mostly silent: John Kelly’s default is to serve others above himself. What constitutes honor for the old Marine cannot be made in the next 60 days before the election, but it could be harmed. The General in him knows 60 days between now and the election contrasted to his 70 years of life is very little. The father of a fallen son knows there are things far more important than the current news cycle. The Marine who first served under President Nixon knows that administrations come and go, but the country must endure for as long as we possibly can. John Kelly the man knows John Kelly better than anyone, and knows the most important consideration of all to this current tempest: John Kelly is not Donald Trump. Reacting against all your principles, all that you’ve said privately and publicly, all that you’ve ever stood for over a slight — however grave or justified– just for the glory of a fleeting moment from folks who don’t care about you anyway, is something Donald Trump does. Not John Kelly.

In fact, unless he completely changes his mind, he has already given us his answer. Not on Trump, but on the bigger question of his mindset about what he has done, and if it was worth it. In that June 5th interview, even knowing how he left the Trump administration and the harsh words, and 40 plus years in uniform, the death of his son, the questioning of his own character by folks who never had to make the calls and decisions he had to, the question came and the answer reveals much:

Kelly touted the founding fathers’ vision for checks and balances and separation of powers – credited the strength of U.S. institutions supported by the constitution. Finally, asked whether he would serve in a future administration, Kelly revealed, “I would serve,” noting he comes from a family of service.

John Kelly has done his bit, and then some, for his country. He has given more than he ever took in return. And he doesn’t owe us a damn thing.