Book Notes: “The Hermit in the Garden” by Gordon Campbell 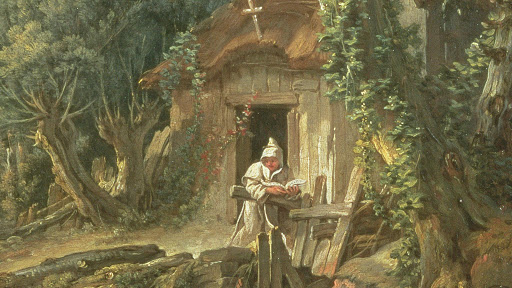 Something that became quickly obvious during the early weeks of the pandemic, back when we were all still making earnest attempts at self-quarantining, was that some of us are much happier spending time alone than others. Hearing from friends who found the whole ordeal of sitting in a room alone with their thoughts to be hellish just made me realize how happy I am to be doing the same. If I could spend months alone in a cottage, I gladly would. Solitary confinement? Bring it on!

Of course, at home, we have contact with screens, which seems to be a replacement for face-to-face contact for plenty of folks. Someone should really write a cultural history of the steady encroachment by flat screen televisions into places where otherwise silence might reign: waiting rooms, lobbies, even libraries. Maybe it’s not human contact that frightens moderns, but inwardness.

And at any rate, most people would not make good ornamental hermits. There was a time in which this was a legitimate profession; landowners would hire men through the newspapers to reside in their garden “hermitage” for a set period of time, providing them with the necessities of life, while forbidding them to cut their nails, hair, or beards. It doesn’t sound like a bad gig, frankly.

Gordon Campbell has written what has to be the most thorough and enjoyable book on the phenomenon, The Hermit in the Garden. Subtitled “From Imperial Rome to Garden Gnome,” Campbell focuses primarily on Georgian England, where the trend hit its peak, an era of “Hermitmania,” shall we say. Hermits, those who withdraw from society for spiritual reasons, have existed throughout human history, so Campbell focuses more on the physical location of withdrawal, the hermitage, that simple hermit’s hut, and the cultural history around them. 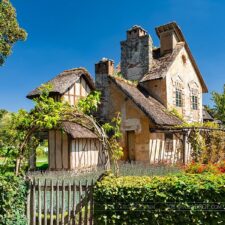 He starts with an influential early predecessor, Hadrian’s villa (c. 118-134) where the Emperor got off the grid, while remaining in public view. Other antecedents include the villa suburbana of Pope Innocent VIII and the smaller portions of Louis XIV’s chateau at Marly. In 1715, the German Markgraf Georg Wilhelmvon Brandenburg-Beyreuth commissioned the building of a getaway where he and his court could pretend to be hermits. Perhaps the apogee of the court hermitage was Marie Antoinette”s fairly ridiculous “hameau” where she and her courtiers played at being peasants and shepherds, something as absurd as millionaires dressing in blue jeans or cowboy hats.

With the 18th century, many religious traditions because secularized, partly in response to the positivism of the Enlightenment. Campbell sites the enormous influence of Jean-Jacques Rousseau, a writer who gets a rather bad rap from certain conservatives, although a bit unfairly; in much of Rousseau’s writing, he comes off mostly as a proto-hippie- convinced that “nature” leads man to be good, but society corrupts. I have argued that the different strains of Romanticism are united by a sort of negative response to the burdens of social selfhood, and what better way to escape that than by spending long periods of time alone? The French Romantics attempted to revive pilgrimage, while the English, it seems, brought back the hermit dwelling, likely under the sway of the Germans, who really created Romanticism. Gordon sites Goethe’s fascination with hermits and I first heard of the phenomenon of ornamental hermits in Elective Affinities.

The English fad for building tiny hermits huts on their properties- and note that you had to be a large landowner to do this- peaked in the 18th century with its cult of sensibility, “pleasing melancholy,” and contemplative isolation. There are still occasional hermit positions, but if you’re looking to make this a career, you’re a few centuries late.

But, you can still visit the remains of garden hermits and, of course, British gardening never dies. Campbell explains the concept of a “folly”: a “garden building that has been included for design purposes rather than utility.” Under this umbrella, we find structures such as gazebos, grottoes, and hermitages. Naturally, there is quite a bit of overlap between grottoes (which resemble caves) and hermit huts. If you would like to visit these sites, Campbell details the many surviving hermitages in England, Ireland, and Scotland. Most of them are unfortunately unmanned. 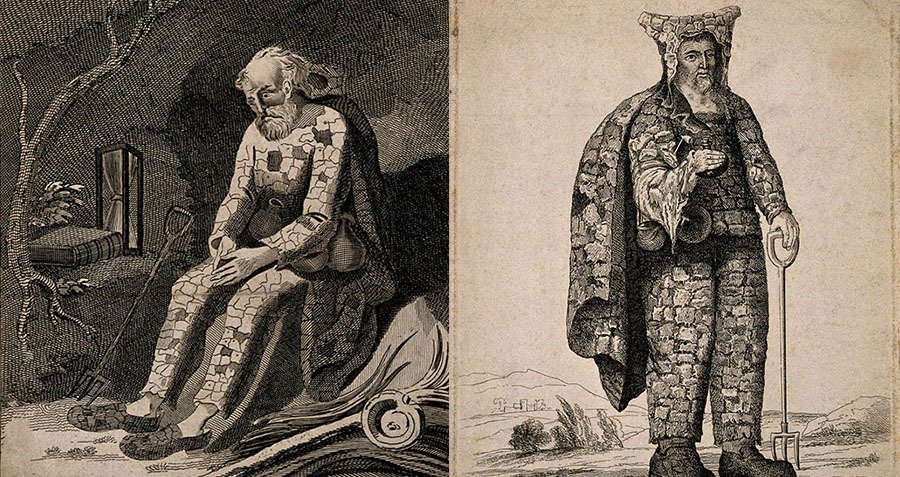 An interesting tidbit is the hermits themselves were often costumed in imitation of ancient Druids, who were seen in the popular imagination as the ancient nature-loving bards of Britain. For a time, the people who filled the role were what we might call “earnest hermits,” although eventually there were also actors, dummies, part-time hermits, and even mechanical hermits in these spots. Their decline Campbell attributes to the fading taste for cultivating strong emotions, which had become a bit ridiculous by the late 1700s. He even discusses the deeply critical question of garden gnomes: they originated in Germany, drawing from local folklore about dwarfs and treasures, but did they come to replace the ornamental gnome? Well, sort of- the Disneyfied gnome hasn’t the same aesthetic appeal of the hired hermit, but they must be cheaper.

Thus, the garden hermit was largely a product of aesthetic tastes, perhaps not so different from a taste for cowboy boots or peasant blouses after all. Unfortunately, it does not seem that a great many hermits left behind memoirs of their time alone in a hut on a rich person’s estate. I do wish we could have heard more about what a hermit’s life was like and what went through their minds; but Campbell sticks, rightly I suppose, to the historical record we do have. Hermits were once considered to be the keepers of the “Pythagorean flame,” lonely men who knew the secrets of nature and the universe. Alas, they do not seem to have left us records of these secrets.

Nevertheless, this is all the more incentive for modern day amateur hermits to pack up and shack up in whatever forests they can find. Heigh-ho!

The Hermit in the Garden is available through Oxford University Press.