Downwind And East: The People And Cuisine Of Downeast Maine 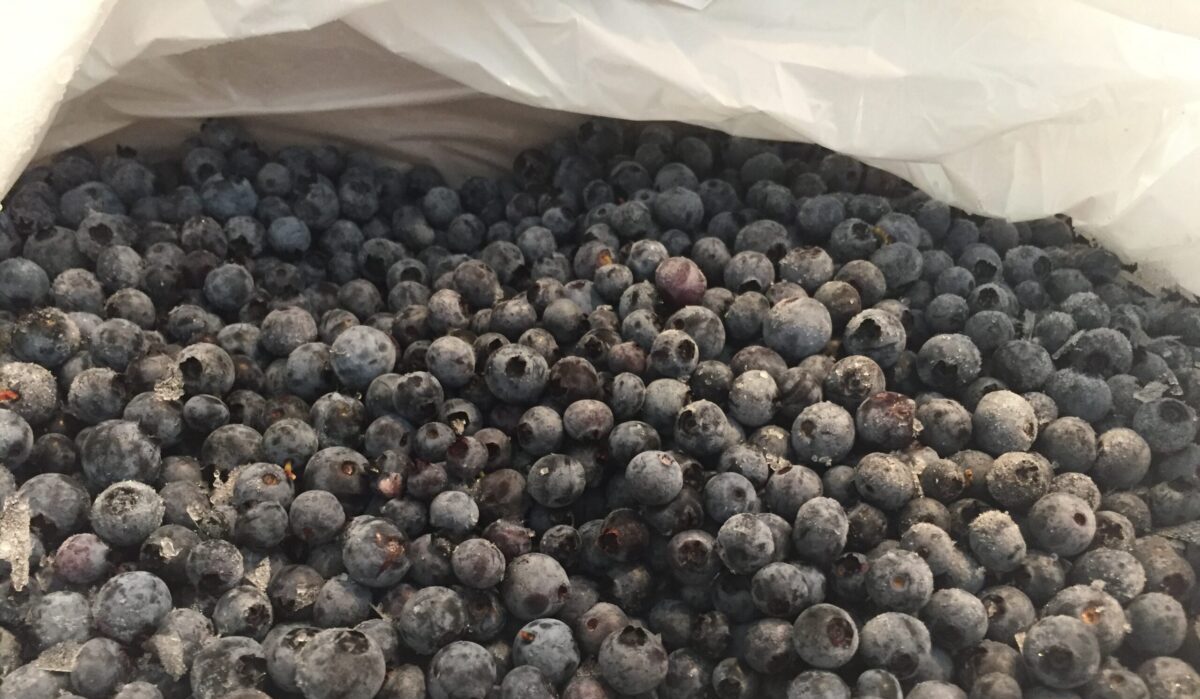 “People often put a b at the end of my name,” he says as I nervously cross out the b in my notes. The he in question is Wayne Hanscom, 72 years old and the possessor of a quintessential Downeast Maine accent. It’s a close cousin of the more well-known Boston accent but has had its feisty brashness eroded so, like sea glass, the points and sharp edges are rounded and blended and smoothed to silkiness. Time and tide might choose—of their own volition, of course—to tarry a while at the turn and listen to Wayne, or any of the countless others like him, finish a yarn.

It’s a beautiful August day, warm and clear. A cat lounges on the steps of the farmhouse.

Wayne is a blueberry farmer; or, if you’ll tolerate the oxymoron in the accepted usage, a wild blueberry farmer. His grandparents bought what is now Welch’s Farm in the town of Roque Bluffs, Maine (population 303, as of the last census) in 1912 and, in addition to dairy cattle, they brought sheep which, in Wayne’s telling, made it a wild blueberry farm. The sheep, he says, grazed the field bare of anything they’d eat, which was everything in it that wasn’t a blueberry.

The early twentieth century was, shall we say, an interesting time in this the easternmost edge of the lower 48. Washington County, Maine, had its population peak in 1900. It had shrunk by a third by 1970, down to levels not seen there since the 1840s. Though it has flowed and ebbed in the years since, it is still (as of the 2010 census) just shy of 33,000 permanent residents—still somewhere in the 1840s—a remarkable contraction for an area that, at its peak, thrived on the shipping industry and its fisheries1.

The wild blueberry is essentially a weed. Wayne winces and suppresses a laugh with his hand on his forehead when I call it that. Though a poor competitor and endemic Downeast, it can still be found as far west as Michigan and as far south as West Virginia. It is a lowbush variety, unlike many found in grocery stores and at the U-Pick farms. It clings low to the hard-scrabble, heavy soil. There’s a small patch by some power lines in my New Hampshire town which you will not discover, so help me.

The difference between the lowbush varieties here and the highbush cultivars found elsewhere is twofold. The lowbush berries are at least as flavorful as their highbush cousins, despite being a fraction of the size. They also have a distinct tartness, a balancing character entirely missing from the others. To go from a fat highbush blueberry to a palmful of scrappy little lowbush berries is like going from a school lunch standard cheeseburger to a master chef version made from a wagyu patty with artisanal cheese and applewood smoked wild boar bacon. 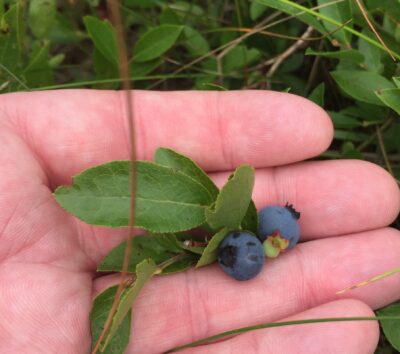 Two wild blueberries in the left palm of the author and photographer. He subsequently ate them.

I may be exaggerating, but only slightly.

What sustains Downeast2—so called because in the warm months the prevailing winds made it downwind and east of Boston for the sailing ships of old—now, is this humble weed, commercial fishing and the other example of Yankee gustatory ingenuity: The lobster. Downeast is not an area made by lobster soaked in butter and wild blueberry pie, but rather one where people like Wayne, who confesses he “wouldn’t live anywhere else,” made the best of the land and sea and turned it to their advantage, teasing out—by hook or by luck—what it would give them.

It is hard to imagine now, perhaps, but in Colonial times lobster was a food for the poor, for indentured servants and prisoners. The smart servant would have it put in his contract to be served better fare than the lowly lobster. Lobsters so large they would be sold at top dollar or given to aquaria now roamed free on the New England beaches then and their meat was used for bait.

All of this changed in the mid nineteenth century when rusticators came out of the cities in search of the old timey New England experience, a myth even in those days. They were fed lobster with butter and were taken up with the—to apply the overused, modern term for the damned thing—authenticity of the cuisine. Combined with time and overfishing, the mythos turned poverty food into luxury3.

Like the lobsters once were on the beaches, wild blueberries in Downeast Maine are everywhere, found on roadsides and driveways and in untended fields. It’s not uncommon this time of year to find bear scat—in the woods, natch—full of them. 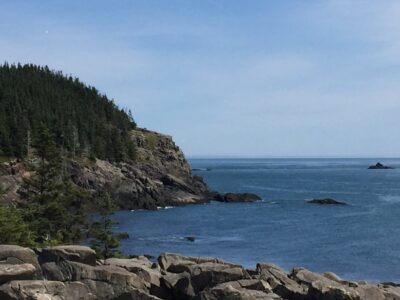 Driving along Great Cove Road I remember how easy it is to speed on roads like these. It’s not the lack of a Police Department, though I suppose that doesn’t hurt. It’s the straight enough roads, bending and heaving with only the occasional roller-coaster stomach drop and the scenery that is so easy to get lost in. Like when the trees on the sea-side of the road end and the view opens to Sanford Cove—misnamed, with bureaucratic rigidity, after a Mr. Sinford. The tide is rising after the low and the cove is mud flat, with a little boat tied to a mooring out in the middle, probably belonging to a lobsterman out pulling pots in Chandler Bay or Englishman Bay.

When Wayne was fourteen, his grandfather—who, along with his grandmother, raised him—fell ill and could no longer manage the farm. So, with twenty head of cattle and forty chickens he took responsibility for the little dairy farm and managing high school. When the cancer took his grandfather two years later, Wayne placed an ultimatum before his grandmother: Either he had to quit school and run the dairy operation, or he would finish high school. He could not do both.

His grandmother considered his quitting school out of the question and, in his words—they come with the broadest of smiles—Welch’s “became a blueberry farm.”

Thus, Welch’s became a blueberry farm for a second time, and perhaps for all.

Wayne leans on the hood of his truck. Behind him is an open shed and a sorting machine that eliminates the ones that have been broken. Those he sells—at a higher price per pound than he sells his beautiful fresh berries, he tells me with a twinkle in his eye—to wineries. The berries then land on a conveyor where two or three women are sitting, picking out the stems and the unripe berries with knitters’ fingers and a grandmother’s eye.

He’s made this a selling point.

A few years back he poached from his uncle—”everybody knows everybody here,” he explains with a dismissive smile—the contract for providing the blueberries for Helen’s, a locally iconic restaurant well known for their pies—the blueberry expression of which even I, who have little interest in sweets, would devour—on the grounds that he had his berries picked over for stems and unripe berries before delivery, thus saving Helen’s both time picking over their berries and money not lost to waste berries.

He won the contract.

His ingenuity goes farther and appears to be a point of pride. “See that cooler?” he says, pointing to a fine-looking walk-in unit just to the next to the shed. It once belonged on a truck and its owner only wanted to get rid of it. Wayne exchanged a couple bales of hay to entice the owner to delivery and, between himself and YouTube, he’s rigged it with an air conditioner and some other electronics so that he could keep his berries cool and fresh. 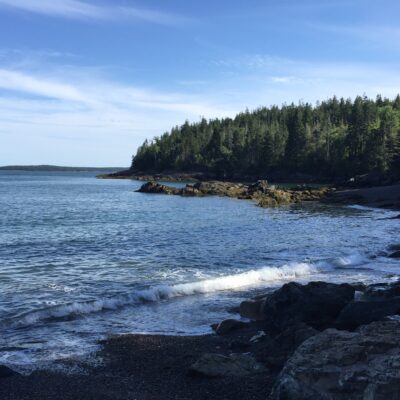 Welch’s wild blueberries get sold at farmer’s markets in Lubec and Machias and, by way of a lady who will “peddle them wherever she can”, have made their way to markets as far south as New York City. Not bad for a sixty-five-acre farm that burns or prunes half of that acreage every year. And every year some of it gets pesticides and is sold to Wyman’s, who freeze fresh, often hours after picking, and ship to groceries all over the country. You may have already had some of Welch’s blueberries without knowing it.

Sitting atop a bluff and looking out at the cove—lobster buoys dot the softly rolling woven sea, a bald eagle cackles nearby and the osprey are out fishing and we’re hoping for a visit from a seal—it is hard to imagine a more peaceful place. But for all the beauty, the essential spirit of the place is the people that inhabit it. The last century has distilled rather than desiccated. What is left is hard working, good-natured folks. And there can’t be anything wrong with that.

Bryan O'Nolan is the world's foremost authority on Michael Pence. He is also the most highly paid investigative reporter at Ordinary Times. He lives in New Hampshire. He is available for effusive praise on Twitter. He can be contacted with thoughtfully couched criticism via email.