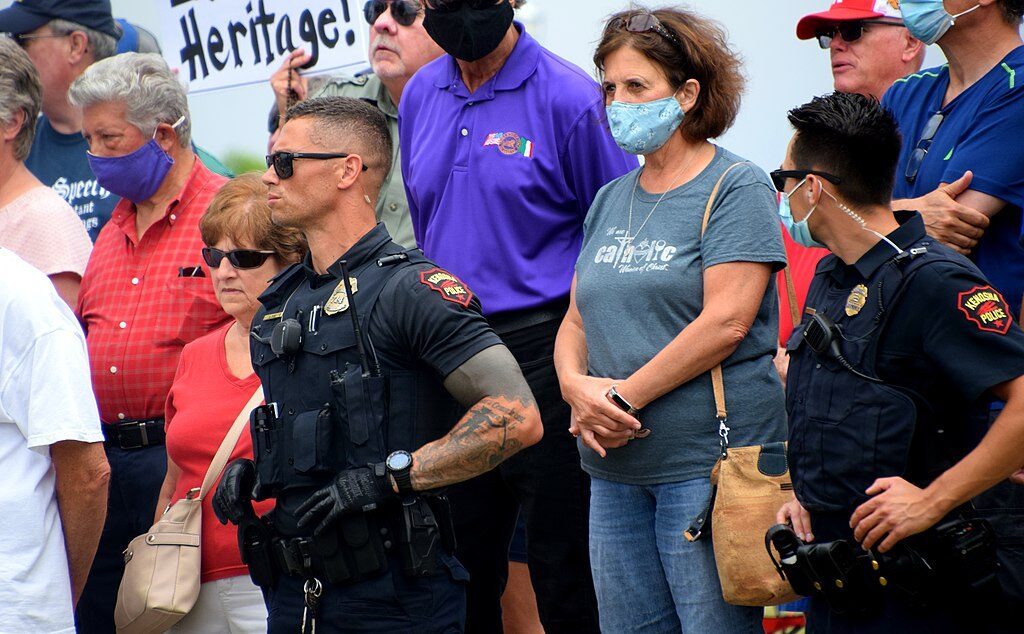 An official release from the Wisconsin Department of Justice has named the Jacob Blake shooter as as Officer Rusten Sheskey, and also announced a federal civil rights investigation has taken over the investigation.

The news release about the shooting said that “during the investigation following the initial incident,” Blake “admitted that he had a knife in his possession.” The release did not specify what type of knife, when Blake allegedly informed officers that he had a knife, or in what context.

“[Department of Criminal Investigation] agents recovered a knife from the driver’s side floorboard of Mr. Blake’s vehicle,” the release added. “A search of the vehicle located no additional weapons.”

The Wisconsin DOJ’s Department of Criminal Investigation is leading the investigation into Blake’s shooting, with help from the FBI, the Wisconsin State Patrol and the Kenosha County Sheriff’s Office. The release said that it expects to provide a full report to the prosecutor within 30 days.

Blake remains in the hospital in stable but serious condition. Attorneys for his family said Tuesday that he is now paralyzed, and that bullets tore through his spinal cord, left holes in his stomach, caused damage to his kidney and liver and required that “nearly his entire colon and small intestine” be removed.

The New York Times Visual Investigation crew has a pretty detailed article and thread on Twitter piecing together various bits of information and video available for the shootings Kyle Rittenhouse now stands charged with.

17-year-old Kyle Rittenhouse has been arrested and faces a charge of first-degree intentional homicide in connection to shootings that left 2 people dead on Tuesday in Kenosha, Wisconsin. Our visual investigation took a closer look at his actions. https://t.co/RgpL3k9iOR

Things have gone from bad, to worse, to deadly in Kenosha, Wisconsin following the police shooting of Jacob Blake.

An Antioch teen has been arrested in connection to the deadly shooting of two people at a Kenosha protest Tuesday night.

Kyle Rittenhouse, 17, was arrested in Antioch, Illinois on Wednesday. He is accused of shooting and killing two people at a Kenosha protest. The Village of Antioch Police Department said the teen was arrested Wednesday morning.

The shooting happened just before midnight near the area of 63rd Street and Sheridan Road. Kenosha police said there were reports of multiple shots being fired and multiple gunshot victims.

Rittenhouse will be charged with first-degree intentional homicide.

The assistance comes as protests continue in Kenosha over the police shooting of Jacob Blake.

On Tuesday, White House Chief of Staff Mark Meadows said Governor Evers had turned down assistance from the federal government. Now, however, President Trump is saying he has accepted help.

“My team just got off the phone with Governor Evers who agreed to accept federal assistance,” wrote President Trump in a tweet. “TODAY, I will be sending federal law enforcement and the National Guard to Kenosha, WI to restore LAW and ORDER!”

“We have National Guard standing by, that if the general for the National Guard needs additional help, we’re there to do it. But today, that request was denied by the governor,” said Meadows.

*Link contains graphic video
As a second video of the police shooting of Jacob Blake emerges, Blake family attorney reiterates that the use of deadly force towards Blake in front of his children was fully unjustified. Source: CNN

Body cameras for the roughly 200 police officers serving Kenosha, Wis., have been endorsed since 2017, but shortfalls in the city budget have contributed to a delay in their acquisition, a city official said.

A lack of funding and technological concerns prompted the city to push its initial plan to buy the cameras this year back to 2022, said Rocco LaMacchia, chairman of the council’s public safety committee.

“We have moved it back so many times,” he said. “I got a feeling this is going to move up on the ladder really fast because of what’s going on around the United States right now. Body cameras are a necessity. There’s no doubt about it.”

The issue was highlighted after Jacob Blake, a 29-year-old Black man, was shot Sunday by a Wisconsin police officer.

We will NOT stand for looting, arson, violence, and lawlessness on American streets. My team just got off the phone with Governor Evers who agreed to accept federal assistance (Portland should do the same!)…

Once again, a Black man — Jacob Blake — was shot by the police. In front of his children. It makes me sick.

Is this the country we want to be?

Needless violence won’t heal us. We need to end the violence — and peacefully come together to demand justice. pic.twitter.com/WdNqrxA3PK