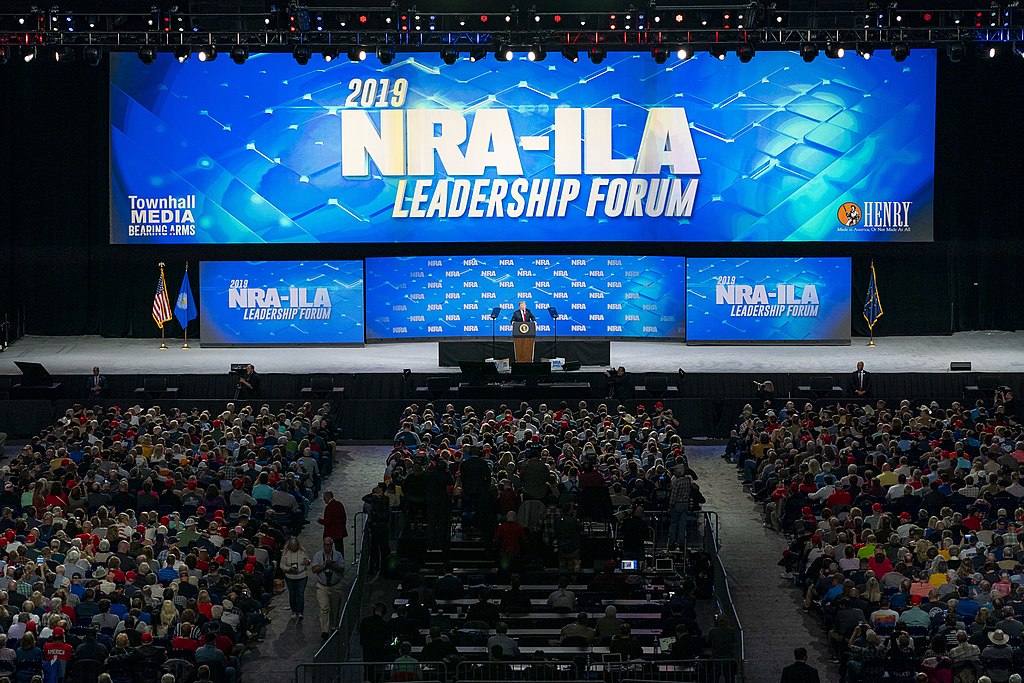 The long-running battle between the National Rifle Association and the State of New York has a new chapter opening up. New York Attorney General Letitia James announced a civil suit against the organization and four of it’s most prominent members of leadership:

New York Attorney General Letitia James on Thursday announced that the state is seeking to dissolve the National Rifle Association in a lawsuit that accuses the leadership of the flagging nonprofit of diverting millions of dollars for their own personal use.

According to the lawsuit, the senior leadership of the NRA squandered millions in donations on personal trips, private jets and expensive meals. The failure to lawfully manage the organization’s funds contributed to losses of $64 million over three years, the suit says.

The suit was filed in New York county in the New York State Supreme Court. At a press conference announcing the suit, James said the NRA was “a breeding ground for greed, abuse, and brazen illegality.”

James is asking the court to dissolve the NRA and require each of the current and former executives named in the suit to pay full restitution. The suit argues that the four executives, including CEO Wayne LaPierre, shouldn’t be permitted to ever again serve on the board of a New York charity.

“The NRA’s influence has been so powerful that the organization went unchecked for decades while top executives funneled millions into their own pockets,” James said. “The NRA is fraught with fraud and abuse, which is why, today, we seek to dissolve the NRA, because no organization is above the law.”

The New York lawsuit involves allegations of civil, not criminal, violations. But James said that the investigation was ongoing and “if we uncover any criminal activity, we will refer it to the Manhattan district attorney.”

D.C. Attorney General Karl Racine announced nearly simultaneously on Thursday that the district was suing the NRA Foundation, alleging that the foundation allowed its funds “to be diverted from charitable purposes and wasted to prop up the NRA in impermissible ways.”

The NRA did not immediately respond to a request for comment.

The suit continues a long-running battle between the state and the gun-rights group, which has been chartered in New York since 1871.

AG James has been vocal about the NRA for a while, including comments that the group was a “terrorist” organization in 2018, and necessitated her statement during the presser the suit had nothing to do with her personal views.

Political motivations be what they may, the financial problems of the NRA and the leadership of them under LaPierre is well known and widely suspect:

There’s one place the guns rights organization knows the money was going: Ackerman McQueen’s existing contract with Oliver North, which is worth an estimated $1 million according to NRA insiders interviewed by the New Yorker and the Trace (NRA presidents are generally unpaid by the organization). But as for the rest of it? While the contract is purportedly for a 12-episode documentary series titled American Heroes, that series has only resulted in four episodes over the agreed-upon time period.

But then LaPierre fired back — in a letter of his own to the board, he said that on April 24, North called one of LaPierre’s staff and said that unless LaPierre resigned, North would send a damaging letter to the NRA board alleging sexual harassment against another staff member and more financial improprieties (like excessive staff travel).

According to LaPierre, the message from North and others was clear: drop the complaint against Ackerman and resign from his post as CEO (North allegedly told LaPierre’s staffer that he could negotiate an “excellent retirement” for him), or risk having damaging information about him made public. In the letter, LaPierre argues that only when Ackerman faced legal scrutiny did it, via North, make these demands. By Saturday, it was North who had resigned.

But on May 11, more details emerged of LaPierre’s spending, including documents published by the Wall Street Journal showing that he had billed Ackerman $39,000 for one day’s shopping at a Beverly Hills boutique and more than $12,000 for a car and driver in Italy.

In a statement to the Wall Street Journal in April, Ackerman said that the complaint North allegedly blackmailed LaPierre over was “frivolous.” But the current bad blood between Ackerman and the NRA is just a part of an overarching story of financial mismanagement, as the organization comes under increased scrutiny by both journalists and the law for the swirl of money moving between the organization, its vendors, and even the spouses and family of staff.

According to reporting by the New Yorker and the Trace, 10 percent of the organization’s money is being spent on gun safety, training, and education, with the rest going to “messaging” efforts, like an Ackerman-produced magazine created to show off wealthy NRA members’ cars and planes. NRA executives are making hundreds of thousands of dollars while the organization itself is allegedly $43 million in debt, no longer supplying free coffee at its Virginia office, and firing dozens of staffers.

We will see how it all plays out in court. AG James has not been subtle in wanting to take a run at the NRA’s non-profit status for a while. LaPierre and crew have no one to blame but themselves for the financial mess the organization is in, especially if accusations of them personally profiting while the coffers ran dry, then ran up deficits, proves to be even partially true. Even within the NRA there is a sizeable group of the membership that would be fine seeing Wayne and friends fall from grace and be gone from the organization. Shooting for the dissolution of the organization feels like a headline-grabbing reach, one that won’t give those folks who don’t like LaPierre or the direction of the NRA on the right an option to let it ride. Plenty of money and politics involved in this, so whatever happens you can be assure it will be loud, be messy, be proclaimed to be the end of all things, and probably be quietly settled sometime after the election.

Until then, though, should be a mess of a show.