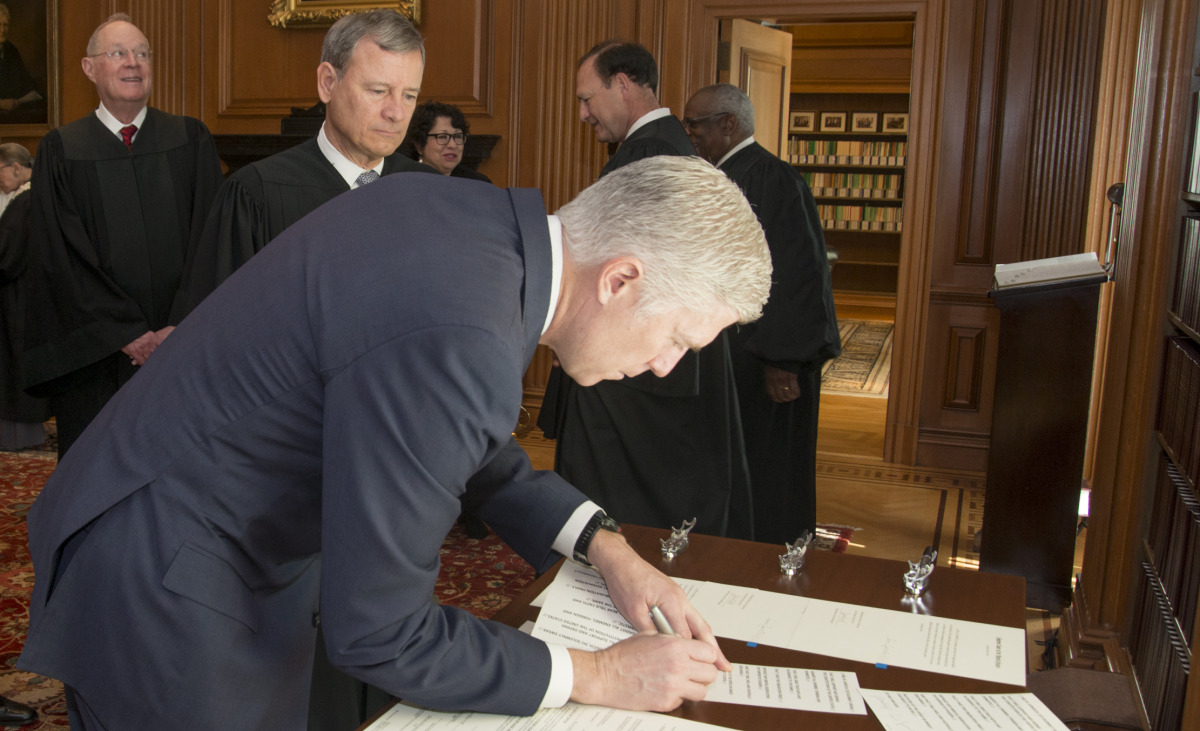 L1: This week’s Case of the Week will be short, because it is not actually a case — at least not one that will be considered in full by the Court because the application for injunctive relief was denied. Nevertheless, the matter made headlines and whipped up some conversation on Twitter and elsewhere, carrying on recent SCOTUS story lines like Gorsuch’s veneration and “John Roberts has abandoned his oath!”

The case is Calvary Chapel Dayton Valley v. Steve Sisolak, Governor of Nevada. The petitioner church challenged Governor Sisolak’s order restricting the number of worshipers allowed in a church to 50, no matter how large the building. The basis of the challenge is that while churches are capped at 50 congregants, casinos and other facilities have a cap of 50% capacity. In some casinos, that amounts to thousands of gamblers gathering at once.

The denial by the Court was 5-4, with Roberts on the side of the “liberals”, and consisted of one declaratory sentence with no further elaboration or reasoning. The remaining justices offered three dissents, one by Alito joined by Kavanaugh and Thomas, one by Kavanaugh writing for himself, and one with Gorsuch also going solo.

Alito’s version is informative in laying out the facts and circumstances around the application: Sisolak’s order allows casinos, restaurants, bowling alleys, bars, gyms, and other recreational facilities to operate at 50% capacity; churches are barred at 50 congregants or less. The church has asked to be treated the same, hoping to host 90 congregants for a socially-distanced in-person service.

In justification of its treatment of churches, the governor argues that the state has more authority over casinos and the like, making it easier to enforce the masking and distancing rules. But the church included the following photo in their application for relief, taken at a Las Vegas casino on June 4th: 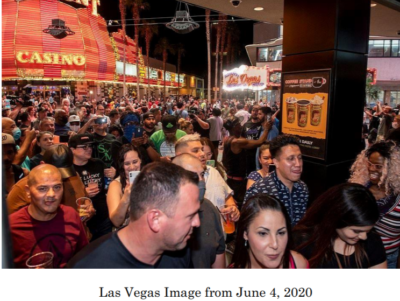 Alito notes that people at casinos eat and drink, activities that can create more risk than socially distanced and masked parishioners. Further, he points out that people travel from out of state and around the world to go to the casinos.  The state argues out that churches are not the only “disfavored” entities- museums, galleries, zoos, aquariums, and trade schools are also limited more than casinos and other favored venues– but Alito states that such does not excuse the discriminatory treatment of worship houses.

Kavanaugh signed on to Alito’s dissent in full, but wrote separately to emphasize the transmission risks present in casinos is at least as high, or higher, than the risk present at churches. He concedes that churches can be restricted to the same extent as secular entities, but they cannot be treated less favorably than the most favorably treated type of place without sufficient justification, which Kavanaugh does not see in the facts presented.

These dissents are compelling, but it was Gorsuch’s succinct, powerful paragraph that got the attention on social media (emphasis added):

This is a simple case. Under the Governor’s edict, a 10-screen “multiplex” may host 500 moviegoers at any time. A casino, too, may cater to hundreds at once, with perhaps six
people huddled at each craps table here and a similar number gathered around every roulette wheel there. Large numbers and close quarters are fine in such places. But churches, synagogues, and mosques are banned from admitting more than 50 worshippers—no matter how large the building, how distant the individuals, how many wear face masks, no matter the precautions at all. In Nevada, it seems, it is better to be in entertainment than religion. Maybe that is nothing new. But the First Amendment prohibits such obvious discrimination against the exercise of religion. The world we inhabit today, with a pandemic upon us, poses unusual challenges. But there is no world in which the Constitution permits Nevada to favor Caesars Palace over Calvary Chapel.

L2: Justice Gorsuch has been a pleasant surprise or a terrible disappointment, depending on the issue and on which side of it you fall.  His recent decision in Bostock, upholding workplace discrimination protections for LGBTQ+ people, particularly frustrated conservatives. Gorsuch professes to base his decision strictly on textualism; what matters is not the intent, but the letter of the law. But Gorsuch, like his brethren, may not do so at the expense of precedent, which Josh Blackman argues in The Atlantic leads to “halfway textualism”.

L3: Speaking of the Bostock decision, there was apparently some drama behind the scenes.

L4: Brian Stelter and Asha Rangappa of CNN, and Dan Zak of the Washington Post have provoked an attorney for Nicholas Sandmann, with whom their respective outlets recently entered into settlement agreements to resolve Sandmann’s defamation lawsuit. The three either retweeted or commented on a tweet by lawyer Mark Zaid, unaffiliated with the case, in which he speculated the settlements were “nuisance value.” Stelter retweeted it, and Rangappa replied with a guess as to the amount. Zak replied to a different tweet, in which he too suggested the settlement was just “go away” money. Sandmann’s attorney, Lin Wood (who features a Q Anon slogan in his Twitter bio) made the same comment for all three: “This tweet by @MrDanZak  may have cost him his job as a journalist at @washingtonpost. It is called breach of confidentiality agreement. Dan Zak is a liar. I know how to deal with liars.” It is unclear how a guess is a lie or a breach, but nevertheless, CNN and the Post should probably send out a memo.

L5: What the US needs is more lawyers. According to an ABA report, some US counties have only one lawyer per 1000 residents, creating what they call “legal deserts.” In reality, of course, it isn’t that the country is lacking in lawyers; its just that we tend to concentrate in some areas more than others. New York City, for instance, has 14 per 1000 people, while 2/3 of counties in Idaho have less than 1 for the same number of people.

L6: 7 year old twin sisters started a lemonade stand, and you can guess where this is going. Karen on Facebook started in with “but do they have a permit??” Rather than starting a war or making his daughters shut down their stand, their dad saw a learning opportunity: Help the girls “go legit” and thus start their business skills early. Now, their business “Twin-Monaide” is becoming quite a success.

L7: It is still Bar Exam Week across the country, although some states have canceled or delayed testing. Some states insisted on proceeding in person, and others are attempting an online exam. It’s going about as well as one might expect.  Indiana has already had to push theirs back a week, but Michigan tried to sally forth with its online testing- and crashed. I’m sure this has not added a new layer of stress to the marathon of neurosis that is the bar exam.