The Misguidance Of Clark Kent 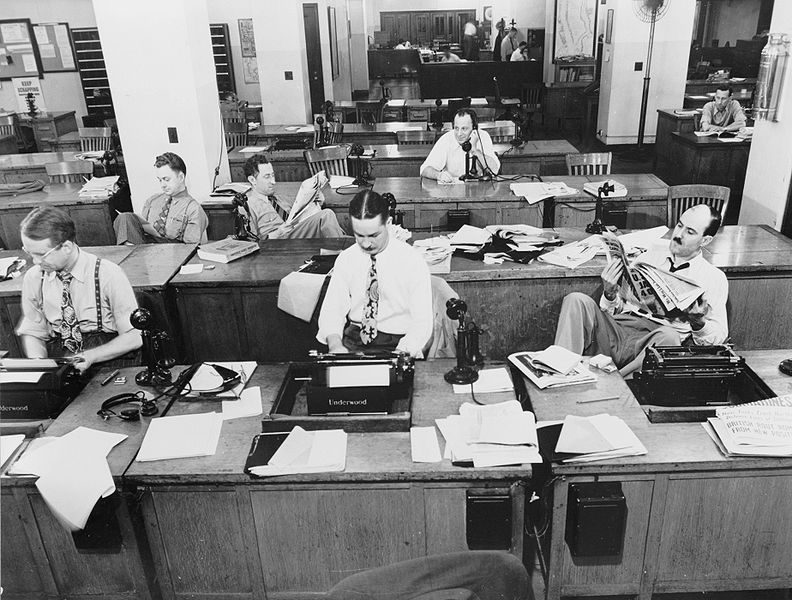 Photo taken by Marjorie Collins. As a work of the Federal Government it is in the Public Domain.

The following story is meant to be humorous, and is not intended to represent men of steel or any other alloy for that matter.

People often wonder how the greats find their niche. Let me tell you a story from my earliest days in the business, when I had the pleasure to work with one of the giants of journalism, the Lion of the Linotype himself, Clark Kent.

Clark always had this reputation around Metropolis of being mild mannered, and I suppose in his own way he was. But don’t go thinking that after a big scoop appeared above the fold he wasn’t out until the early hours of the morning like the rest of us. There were rumors that early on Ms. Lane wasn’t the only alliterative lady to have fallen for his charms. The stories about Jimmy Olsen you may have heard whispered in the quiet corner nooks of darkened city bars are just as true as all the ones you haven’t heard, God rest his soul, the poor bastard.

Senior year of high school: he walks out of shop class, and while he’s happy to be on his way out—the argument he’d left behind was about whether or not he was cheating at the wood burning project by using his laser vision—he was less than enthused, shall we say, to be headed to the office of one Ms. Torres, Guidance Counselor. Ms. Torres always got her way.

He entered her office and sat down meekly—he was even more mildly mannered in those days—and handed her his hall pass, neatly pressed in his pocket since homeroom. The chair was uncomfortable, the room stiflingly hot.

“Thank you for meeting with me,” she says.

She’s of the world-weary school-marm type: nondescript attire, glasses teetering on—but never falling from—the tip of her nose, hair all a jumble atop her head, and a stare that demanded, but might not require, respect.

He managed a quiet, “Ma’am” whilst staring intently at his hands.

“Have you thought about college?” she asked.

“A little.” It was barely a squeak when the words came out. She’d have some idea, he knew not what, but he knew he’d feel compelled to comply.

“With your athletic abilities, the world of higher learning is, as they say, your oyster,” she chimed, a curl of pleasure in her voice.

“I’m not really one for shellfish, Ma’am,” he stammered, attempting to add some levity to the conversation.

“An allergy?” she asked, with what sounded like genuine concern in her voice.

“No ma’am, I don’t have—” he broke off, anxious. “Well, I guess you could say I only have, one allergy, but I manage to avoid it well enough.”

“That’s excellent. So,” the word hung in the close air of the office. “What do you consider to be your strengths?”

“Gee, Ma’am. I don’t like to brag,” he said with the characteristic humility he carried to the end of his days.

“I appreciate your reticence, Clark, but for our purposes, we must be absolutely honest with each other. We wouldn’t want you in a career unsuited to your abilities.”

“Well, okay,” he began. “I’m literally stronger and faster than anyone else on Earth, and it’s not even close. And I can fly.”

“Have you considered journalism?”

“I—what? No,” he said, genuinely taken aback. “I’d have thought there were better ways I could contribute. I mean, I could mine minerals and precious metals with remarkable efficiency.”

“But these writing scores, Clark,” she countered. “Now those are remarkable.”

“I could mine the moon!”

“Clark, Clark,” she took her glasses off and fanned herself with what he assumed was his permanent record. “You just don’t appreciate the value of timely and accurate reporting.”

“Wait, Ms. Torres. So, between writing a Bridge column and running super-fast on a treadmill and providing the entire Metropolis Metropolitan Area with effectively free electricity—”

“An unbending drive for the truth is an admirable quality in a journalist.”

“I could be an important part in the battle for truth, justice and the American way!”

“You could be a bird or a plane by that logic, Clark.”

Clark crumpled, deflated in that damned uncomfortable chair. He’d tried his best, brought his strongest evidence up against the immovable object that was Ms. Torres’s view of the world about her, and failed.

“So, Clark, unless your farts can fertilize the American Midwest to the extent that we can solve the problem of world hunger, I think it’s clear your path is journalism,” she said.

His head fell upon his chest, he again took great interest in his hands and fingers.

“Clark, can your farts do that?”

“Then journalism it is, then,” she said and took out her pen.

Not five months later your man is toiling away—collar unbuttoned, shirt sleeves rolled up, hair an unkempt mess—at some highly ranked J-school, smoking unfiltered cigarettes and drinking cheap Scotch while working the phones to track down one campus kerfuffle or another. A few years later he’s a cub reporter at the Daily Planet, fighting off old Etaoin Shrdlu like the rest of us sinners. The rest is history!