I am currently on my first vacation in a long time. So no regular Throughput this week. But since I did glimpse Comet NEOWISE, I thought I’d put up a quick post. 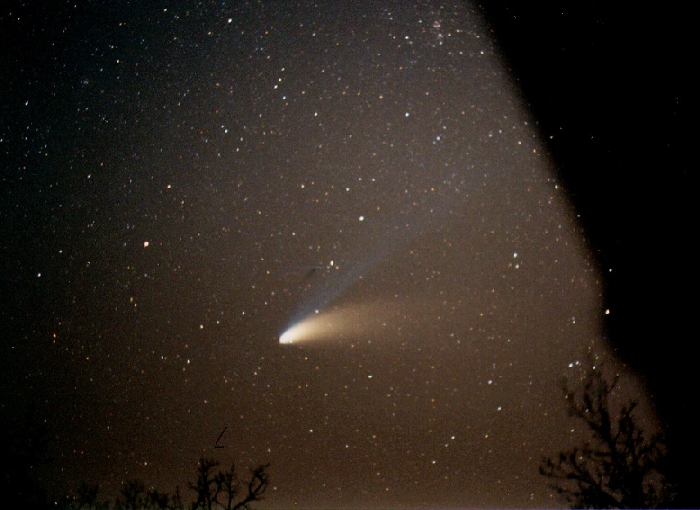 Comet Hale-Bopp, as photographed by the author on March 29, 1997. This was a 10 minutes exposure on a tracking mount with a Pentax.

The last time I saw a comet with my naked eye was 1997 when I was in graduate school. We had known about Comet Hale-Bopp for some time and had been planning for its passage of the Earth. Comets are notoriously capricious, though. They can sputter, die, brighten or break up. Older hands remembered the disappointment of Comet Kohoutek. But almost exactly a year earlier, Comet Hyakutake had surprised us by power-diving out of the Sun and becoming incredibly bright as it passed the Earth, its tail stretching across almost a fifth of the sky. When Hale-Bopp showed up and was as spectacular as advertised, we were ready. I remember the exact date of our public night — April 1, 1997. I remember it because the local TV station had us play a prank on the viewers by pretending the Comet was named after Alan Hale of Gilligan’s Island fame. I also remember it because I’d just gotten a new girlfriend and, well, we had a moment under the light of that comet.

Naked-eye comets are rare though. It’s been 23 years since I last laid eyes on one. So I couldn’t pass up the opportunity to see NEOWISE. After a few days of failure, I finally got a perfectly clear night, right as it is making its closest passage to the Earth. At about 9:30, I found the Big Dipper, then scanned left and toward the horizon. It wasn’t immediately obvious. But as my eyes adapted to the dark, it became visible. It was especially visible if I looked slightly away, since the center of the human eye has almost no rods, the cells that detect very faint light. I didn’t have binoculars, but I’m told they can help. There’s also an app in the Apple store that uses the NASA ephemeris and GPS to project where the comet should be.

Needless to say, Twitter has been filled with spectacular images of the comet. Viz:

Finally—I was able to get a clear view of comet NEOWISE tonight! pic.twitter.com/gYtgAijI4y

Comet Neowise this morning at the Tidal Basin. #cometNEOWISE pic.twitter.com/RkqgLo85Dt

You can also read here on some of what
we’re seeing in the comet and its spectacular tail. Or follow this Twitter thread.

With the recent visit from Comet NEOWISE I thought it would be fun to dive into the fascinating world of fluid dynamics relating to comets. Beware: some of these concepts are REALLY weird but I certainly enjoyed researching the topic. Here we go…(a thread) pic.twitter.com/Xvh0OOxJ8x

Looking at the comet (along with one of the people I saw Hale-Bopp with back in ’97) made me very conscious of the passage of time. Since Hale-Bopp, I’ve finished my degree, moved three times, gotten married, had kids, written a novel, become a research professor, gained … some pounds, lost a gallbladder and lost a sister. That last comet passed over a nation going through an era of unprecedented peace and prosperity. The new comet passes over a nation more troubled than it’s been in 50 years and one unable to have mass public viewings because of the worst public health crisis in a century.

I hope you guys will be able to see it while you still can.