There Once Was a Girl 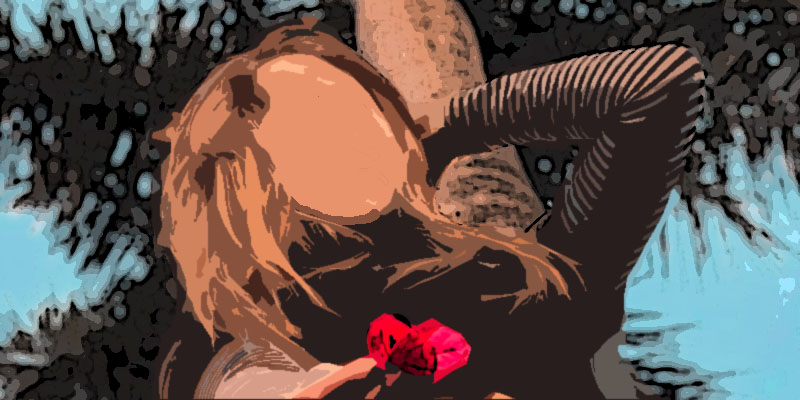 This is a story with no grand theme. It’s just a weird thing like from a TV show that happened. Sometimes relationship topic conversations turn acrimonious and I would prefer that.

When I was a kid, I was not exactly a lady’s man. That’s an understatement. The first eight girls I asked to “go with me”1 or “go out” all said no. They all gave their reasons. The Fox said she had a boyfriend (which she did, conveniently), the Mouse said her parents didn’t let her date, the Duckling just said no with no reason given, the Polecat didn’t say anything and just walked away, the Raccoon also cited parents, and on and on. If I sound bitter, I’m not2. Even the ones who were giving false reasons had their reasons. Mostly, I just needed a little bit of the sort of training that doesn’t exist on How To Talk To Girls and basic socializing and so on.

Then nothing for about a year. Starting again around my sophomore year in high school it started happening again. Same description. Now, I’m sure you can imagine I had gone over every short blond girl I knew. I looked in every classroom. I looked through yearbooks. Nothing made sense. Especially if I tried to connect it to someone anywhere remotely near my orbit spanning from middle school to high school. Nothing. Made. Sense. My friends were no help at all because they were certain it was Shark, who was a short, blond girl who I had become extremely close with. But I didn’t know Shark in middle school. I tried to explore two different short blond girls, one in middle school and one in high school. Maybe I attracted short blond girls? But no, I was sure that it wasn’t Shark.

It was shortly after graduation that she finally told somebody who (a) could identify her and (b) would tell me who it was. A blond girl was asking after me. And it was not somebody I ever would have guessed.

It was Mouse. The second girl I asked out. Here’s where we do the record scratch and span the next five years from an alternative point of view.

When I asked Mouse out, she wanted to say yes but couldn’t because her parents wouldn’t let her. Which was, in fact, exactly what she had told me at the time. “I would, but…”

While I hadn’t been on her radar prior to that, she became smitten with me after. I was, after all, the boy who liked her. I was the boy she could have gone with, in theory, if her parents would only let her. Later in middle school and in high school, our orbits drifted further and further apart. She went to the Honors Class circuit while I was in regulars. In a high school of 4,000, meant that I only knew we were in the same school because of a very occasional spotting or seeing her face while scanning the yearbook trying to figure out who this blond girl was. I passed right by her because I had asked her out and she said no. The ultimate confirmation. But while she disappeared from my life, I didn’t entirely disappear from hers. Whenever someone would ask her who she was interested in and she didn’t have anybody in mind, she would say my name just to have an answer. It was safe because as far as she knew none of her friends or anyone she knew happened to know me. I was her you-wouldn’t-know-him-boyfriend-in-Canada except not in Canada and not her boyfriend. But real! And if it did get back to me, that was okay, because she didn’t not like me.

And anyway, after we all graduated and she bumped into someone she knew who knew me, I guess she figured it was okay to ask after me specifically since we no longer went to the same school and would never see one another again. In a rom-com we would get one another’s number and get a shot at that relationship we never had because… It would have been awkward? I don’t know. But I had a girlfriend at that point and so there was no follow-up. For me, though, the satisfying conclusion is that the mystery was solved.