How a Warning Became a Plan 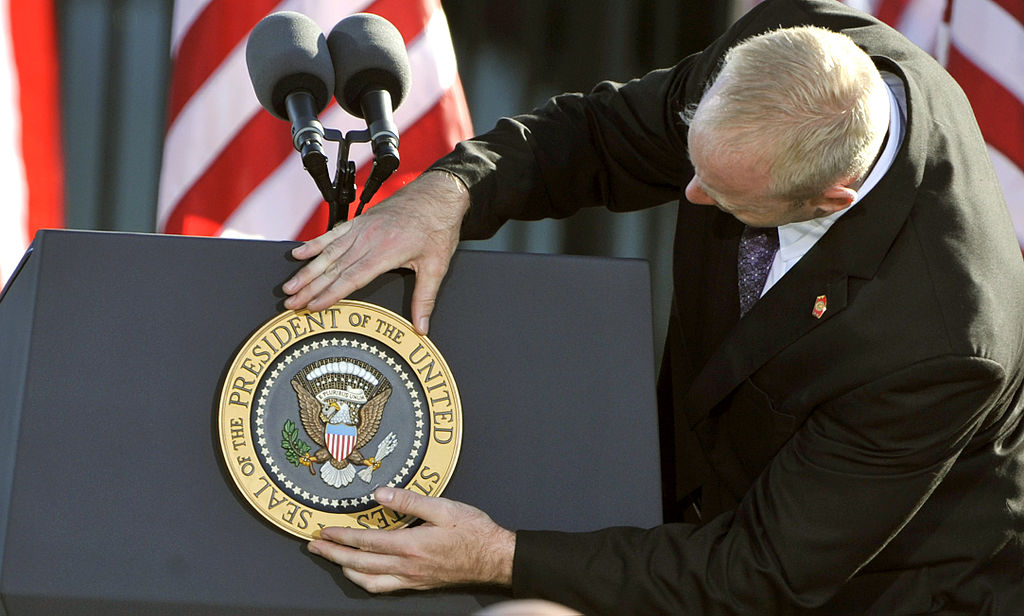 The presidential seal is placed on a lectern before a ceremony at the Pentagon. Photo by Glenn Fawcett via Wikimedia Commons [Public Domain]

Over the weekend, Axios, a press organ whose central conceit is basically “Politico, but with even fewer words and greater frequency,” released a story suggesting that the Trump White House was cooking up several controversial, new administrative actions on politically touchy subjects like immigration and health care. In fact, Axios claims that the Trump Administration is “privately considering a controversial new strategy to act without legal authority to enact federal policies” based on a short piece in the National Review.

Now, this story may not be totally true. Axios has made a business of reporting scoops of controversial or even seemingly crazy potential Trump Administration actions that either don’t pan out or end up fairly banal.

To understand why this potential line of administrative action is likely to be so self-destructive, it’s critical to provide a brief summary of the article that’s animating these antics. A few weeks ago, University of California Berkeley Law Professor John Yoo wrote a piece in National Review that the Supreme Court’s recent decision in Department of Homeland Security v. Regents of the University of California regarding the Deferred Action for Childhood Arrivals program (“DACA”) will lead to bad consequences for executive power.

Specifically, Prof. Yoo wrote that the Supreme Court, by holding that Trump acted contrary to the Administrative Procedure Act during his efforts to reverse the DACA program, has made it possible for presidents to take illegal actions that bind their successors. Yoo facetiously argues that Trump could create a national right to open carry guns via EO and a President Biden would be forced to enforce that policy for a time.

It’s worth noting three things before proceeding. First, Prof. Yoo suggests in the piece that he believes it would be bad for the Constitution and the country if President Trump or a future White House occupant took this course of action. Second, Prof. Yoo has a history of making insane, ahistoric arguments; he was famously one of the authors of the so-called “torture memos” in the George W. Bush Administration, which argued that the U.S. was not bound to follow aspects of the Geneva Conventions with regards to Al-Qaeda detainees. Third, Yoo missed the fundamental issue animating the Court’s decision in the DACA case: that Trump broke the law by trying to take away a legal right without following proper procedures to do so.

Even with these caveats, Prof. Yoo’s article barely works as a poor critique of the Supreme Court’s recent decision. If a reader were to  assume Prof. Yoo is deliberately making an absurd argument – that the President can knowingly and willfully violate the law to achieve a policy goal – his piece might qualify as a mediocre Swiftian satire.

The problem is that this absurd line of argument is, according to Axios, now influencing real-world policy making. Per the Axios piece, Prof. Yoo’s nutty article is being used as the basis for possible Executive Orders by President Trump on both on immigration and even on the ACA. President Trump himself raised the possibility of taking such actions during an interview with Fox News’ Chris Wallace on Sunday.

Now, it makes minimal to no political sense for the WH to take these actions. Trump’s immigration policies are unpopular, and his health care goals of abolishing the ACA were incredibly unpopular even pre-pandemic.

But even beyond that, going down this road of suggesting a presidential administration can create new rights out of whole cloth and bind the other party to enforce them is a bad strategic move for conservatives over the long-term.

If you read Prof. Yoo’s article closely in tandem with the Supreme Court’s actual decision, it’s clear that Prof. Yoo isn’t actually arguing that there’s a path under the SCOTUS decision to create any policy change that a president wants via executive order. Instead, Prof. Yoo is arguing that one president can, under the logic of the DACA case, establish new legal rights via executive order for American citizens and residents and effectively force any successor to keep enforcing those rights for years, while the new president laboriously follows the procedural requirements of the Administrative Procedure Act.

Aside from a few discrete issues such as the right to bear arms, increasing positive rights is generally something that Democrats and liberals want to do. In fact, the current Democratic party wants to extend a bevy of positive rights to people in the American polity, from universal health care and the right to join a union to the right to have a job and affordable universal college.

Conversely, the rights that the Republican party is most focused on extending are negative rights, rights that mean a person cannot be forced to act contrary to their own wishes. These rights include the right to be free of economic regulation, also known as freedom of contract, the right of a business to decline to serve a customer based on the owner’s religion,

Meanwhile, the rights that the GOP values most are negative rights/liberties, like the right to be free from economic regulation (freedom of contract) or the right to decline to serve a customer based on a business owner’s religion. In fact, an overall summary of the current Republican Party’s political goals could fairly be described as “the right to be left alone in an unchanging society,” which is one large negative right.

Prof. Yoo’s argument, if acted upon by a government, is therefore something that is almost exclusively useful at fulfilling Democrats and liberals’ policy goals. Considering that new rights tend to be politically popular and hard to reverse, as evidenced by the GOP’s consistent failure to repeal the Affordable Care Act, it’s not even clear that the GOP could repeal or reverse new rights created by a Democratic president via this route. Prof. Yoo’s argument might be best described as a wish fulfillment machine for Democratic administrations.

Democratic Administrations haven’t gone down this road for a number of reasons, but one key reason is a belief that the judicial system would find this sort of action unlawful because it’s so far outside the bounds of normal legal action by a government. If the Trump White House goes down this road now, however, they’ll be setting the precedent that these actions are fine. In effect, the Trump team will be handing Democratic administrations weapons almost perfectly designed to gore conservative sacred cows.

Nevertheless, the Trump Administration would be wise to back away from this dangerous and untested strategy. Although the Trump Administration may think they have a brilliant strategy to get around unfavorable court decisions and congressional Democrats, creating new positive rights via executive orders is tilting the policymaking playing field structurally away from conservative goals.

At base, this idea of creating policy by pure, open executive fiat is bad and dangerous. But if the WH goes through with this, it’ll be their party and the conservative movement that suffers politically and substantively.

Justin Slaughter is a former House committee counsel, former General Counsel to a U.S. Senator, and former counsel to a Commissioner at the Commodity Futures Trading Commission.