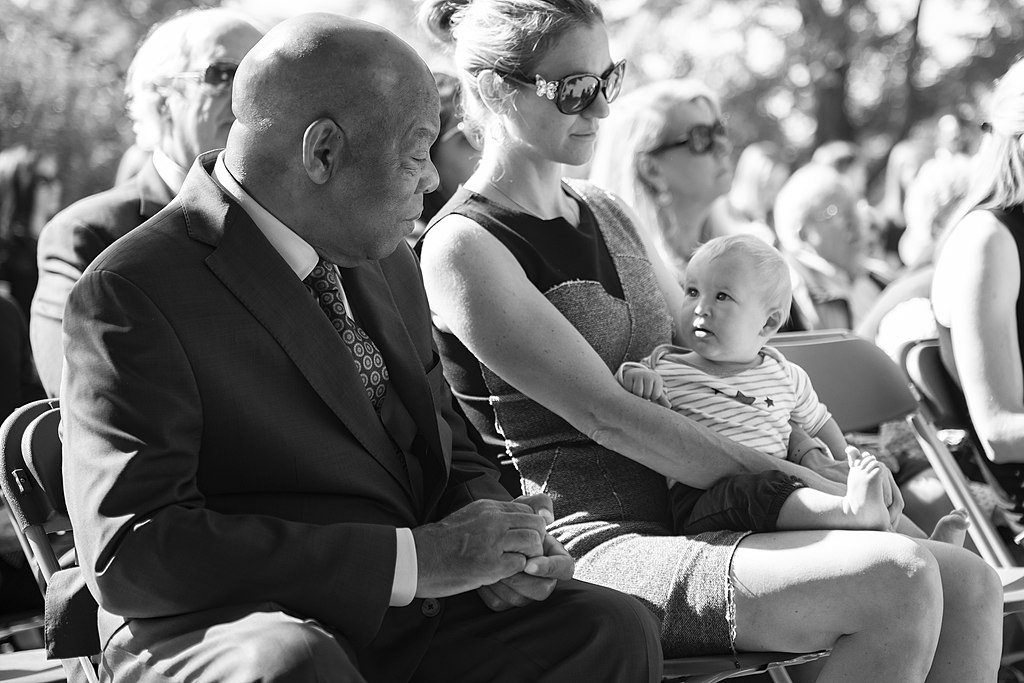 Among a long list of accomplishments, John Lewis was the last surviving speaker from the 1963 March on Washington, having spoken before Dr. King’s famous “I have a dream” speech at the age of 23.

Lewis, a Democrat who served as the US representative for Georgia’s 5th congressional district for more than three decades, was considered a moral conscience of Congress because of his belief in a nonviolent fight for civil rights.
His passion for equal rights was backed by a long record of action that included dozens of arrests during protests against racial and social injustice.

A follower and colleague of Martin Luther King Jr., he participated in lunch counter sit-ins, joined the Freedom Riders in challenging segregated buses and — at the age of 23 — was a keynote speaker at the historic 1963 March on Washington.

“We do not want our freedom gradually; we want to be free now,” he said at the time.

At age 25, he also helped lead a march for voting rights on the Edmund Pettus Bridge in Selma, where he and other marchers were met by heavily armed state and local police who attacked them with clubs, fracturing Lewis’ skull.
Images from that “Bloody Sunday” shocked the nation and galvanized support for the Voting Rights Act of 1965, signed into law by President Lyndon B. Johnson.

In 2011, after more than 50 years on the front lines of the civil rights movement, America’s first Black President placed the Presidential Medal of Freedom on his neck.
Lewis has described attending President Barack Obama’s 2009 inauguration as an “out-of-body” experience.

When he announced that he’d been diagnosed with stage 4 pancreatic cancer in December, he vowed to fight.

“I have been in some kind of fight — for freedom, equality, basic human rights — for nearly my entire life. I have never faced a fight quite like the one I have now,” he said in a statement.

There will be many stories about the extraordinary life of John Lewis, but perhaps this one captures the makeup of the man that will now be encased in accolades and legend.

All U.S. Rep. John Lewis knew for almost 48 years is that at Rock Hill’s bus station, somebody with white fists beat him to the ground.

Some tall, rangy bruiser in a “group of young men” busted his lip open, bloodied his black face — just for trying to enter the waiting room marked “Whites.”

The fists knocking him senseless May 9, 1961, had stayed fresh in his memory, even after the blows vanished into the history of the holy cause for black men and white men to be equal.

“I knew someone attacked me on May 9, but I wouldn’t have recognized him,” said Lewis of 1961.

Tuesday, those same white fists came back into his life. The hands were inches from Lewis’ black face again. This time, not clenched. This time, trembling, hoping. That long-ago white face of hate sat in a chair next to him.

“I am ashamed of it,” said the man behind the fists. “I hate to admit it.”

The right fist came to Lewis on Tuesday in the form of an outstretched hand hoping to be shaken. And then the open arms of Elwin Wilson, who lamented that he wished he’d had the valor to offer a handshake so long ago, when he admittedly hated almost all black people and used his fists to show he meant business.

Then, without pause by either man, an embrace by two men who met so briefly so long ago with the crush of punches to the face.

“I am sorry,” Wilson said to Lewis.

Lewis, 68, who had been a 21-year-old seminary student in 1961, said without pause, to the only man to ever admit being one of the mob who beat him and another civil rights protester: “I forgive you.”

Wilson’s in-person apology — which followed an apology he made in a Jan. 24 article in The Herald — is not only important to Rock Hill and South Carolina, but “all around the country,” Lewis said.

The spirit of the cause for civil rights always was love and redemption, Lewis said, never malice or hate. Even after beatings. The cause for equality has taken years to take root in people such as Wilson, but it has turned from a seed into a majestic canopy of human togetherness. It happened Tuesday in Lewis’ office on Capitol Hill, with the Capitol building looming through a window.

It happened in a room filled with civil rights memorabilia, photos, history of a changed America. It happened with a black president, just two weeks into office, less than a mile down a busy Pennsylvania Avenue, in the capital of America.

It came as buzzers sounded to call a black congressman to vote. Lewis described this in-person apology as “amazing, unreal, unbelievable.”

But it was real, offered by the man with the fists.

“For Mr. Wilson to come here and offer an apology, it is many, many miles down a long road,” Lewis said. He talked about the “power of reconciliation.” The “capacity to change.”

Then he said again: “I forgive you.”

Others over the years had told Lewis “they were sorry for what happened to me” when Lewis was a member of the “Freedom Riders” who protested segregation. Others had told him what had happened then was wrong.

But here, on this cold and windy Tuesday, sat a 72-year-old man named Elwin Wilson who had the courage to say, “It was me.”

“I never had any idea this would occur, never thought it could happen,” Lewis said. “This shows the power of love. Of grace. Of people being able to say I am sorry. I deeply appreciate it. This is meaningful.”