I got burned BAD by early access. The game “Towns”, for example, promised to be a pretty interesting sim game. Instead of being an adventurer going into the dungeon to take on the various big bad, you were the town that provided the adventurers a support system. I mean, that sounds awesome. It was one of the first big “Project Greenlight” games that Steam did. Surely it was going to be good!

Well… it crashed and burned. Complaining that it was buggy seems kinda petty because the idea behind Early Access is that you get access to the game early and, in exchange, they get your money. The problem is when they take the money and run and leave you with a buggy and unfinished game.

I didn’t learn my lesson. I was excited to hear about Spacebase DF-9. It was a sim set in space! Make a space base! And, this time, it’s from Double Fine games rather than some fly-by-night company. If you liked Psychonauts or Costume Quest or Stacking, you knew that Double Fine did a good job coming up with interesting new takes on established genres. Hey! They’re making a sim! And they shut it down and said “okay, we’re not going to put any more effort into this, we weren’t making as much money as we thought we would” and Steam got so ticked off that they rewrote their policy and it now has a section that says:

Early Access is not a way to crowdfund development of your product.
You should not use Early Access solely to fund development. If you are counting on selling a specific number of units to complete your game, then you need to think carefully about what it would mean for you or your team if you don’t sell that many units. Are you willing to continue developing the game without any sales? Are you willing to seek other forms of investment?

Spacebase screwed up SO badly that Steam had to rewrite policies because of it.

But I still haven’t learned my lesson.

I am currently playing Griftlands. It’s a game by Klei and it’s their response to Slay the Spire. It’s in early access.

I can’t do a full review as the game isn’t finished but Klei has done a really good job with games in the past… stuff like Don’t Starve, Invisible, Inc. and Oxygen Not Included. Each of those games is TIGHT and Klei is one of the few companies out there that I am still willing to say that I trust. And… so far, this game is really good.

Since I pretty much wholeheartedly recommend the game for anyone who loved Slay the Spire, I’ll try to avoid spoilers so I’ll say that this game gives you two different kinds of combat. The first is the fisticuffs that you’re familiar with. 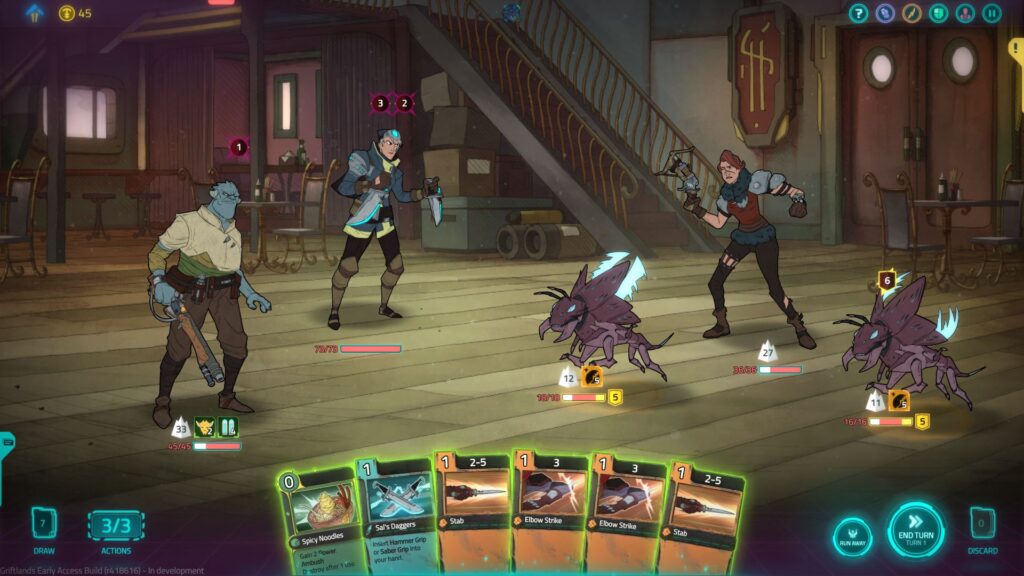 Combat includes an additional dynamic, though: If you kill your opponent, it has an effect upon the game (most fights can be ended with your opponent either surrendering or running away). If you kill someone, one of their friends will hate you. If you have any interactions with this person for the rest of the game, they will resent you and any interaction will be made more difficult. If they’re a shopkeeper, they’ll charge you more money. If you’re in a room that they’re in and you start a conversation with someone else, they will jump in and argue against you.

Which brings me to the other kind of combat: Negotiation. There are two main ways to Negotiate (well, it’s probably better to call it “arguing”). One is through intimidation, the other through persuasion. Intimidation arguments have more variance but the peaks have potential to be higher. Persuasion arguments have less variance and do less damage, but can easily be bolstered to always do the maximum (smaller) damage they have available to them. (Oh, and killing people in the game will eventually have you get cards that change how you do stuff in arguments… it makes persuasion more difficult but intimidation easier.) 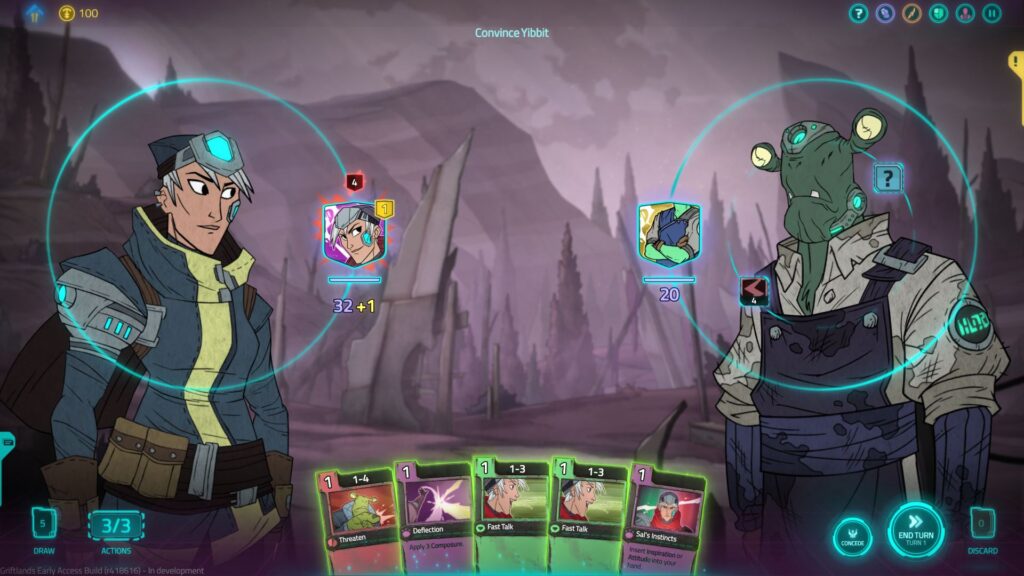 And as you progress through the story, you will have a lot of hand-to-hand combat, but you’ll also have a lot of opportunities to argue first. Winning the argument can help you avoid a fight entirely, but even if it doesn’t, it can have a beneficial outcome. Maybe you’ll talk a bystander in the room to be on your side in the upcoming brawl. Maybe you’ll talk an enemy’s henchman out of fighting on the side of your enemy. Maybe you’ll demoralize your enemy and make him easier to beat in the coming battle.

Slay the Spire doesn’t really have missions, per se, other than climbing to the top of the spire. Griftlands does have missions and picking between them will have different outcomes on how the game plays in the future. For example, if you help a particular shopkeep, they may like you afterwards. This will give you a discount for future purchases. If you insult a different shopkeep and they decide to dislike you, you will then have a surcharge to your purchases.

One of the earliest missions you have in the game is to pick between two shopkeepers you want to help… but you can only pick one. The other one will be insulted. So, on a meta-level, you may ask yourself “which shop do I want to not need stuff from this game?” and choose to help the guy who sells Negotiation cards instead of the one who sells Combat Cards (or vice-versa). So, starting day two, when you go to the shops area, there will be a shopkeep there who likes you and one that does not. And that will change how you play the game.

Many of the missions are rivalrous… by picking this one, you’re going to not have access to that one. So you’ll be stuck asking “wait, what tradeoffs do I want to make” pretty much all the time. And I LOVE games that make you do that. 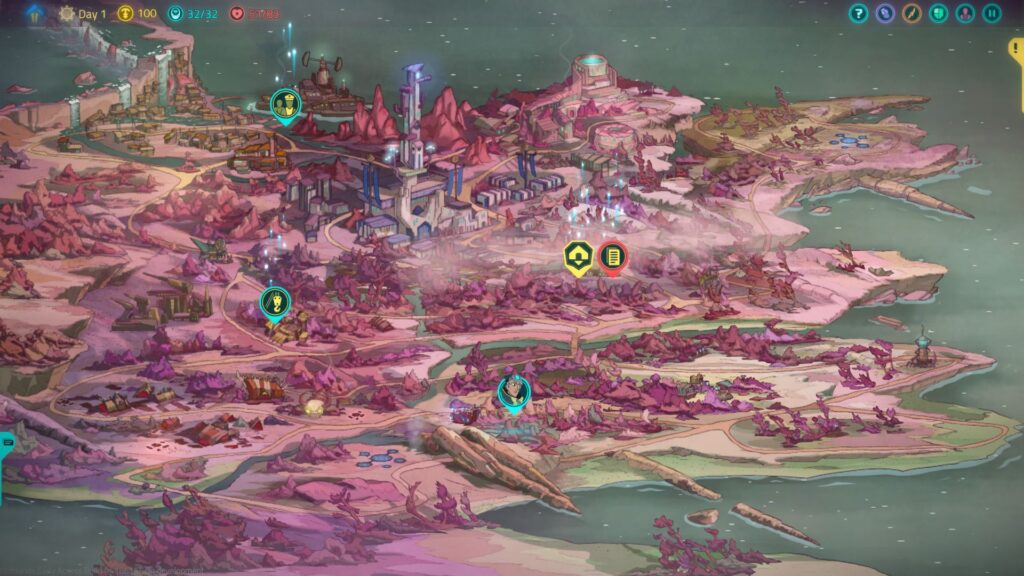 The replayability is out of this world. I’ve talked a lot about different games that I played in the hopes of scratching my Slay the Spire itch… Monster Train, Monster Slayers, Iris and the Giant… all of them fun deckbuilders that I picked up and put back down. Griftlands is the closest I’ve come to finding Slay the Spire.

(Images are screenshots of Griftlands taken by the author)