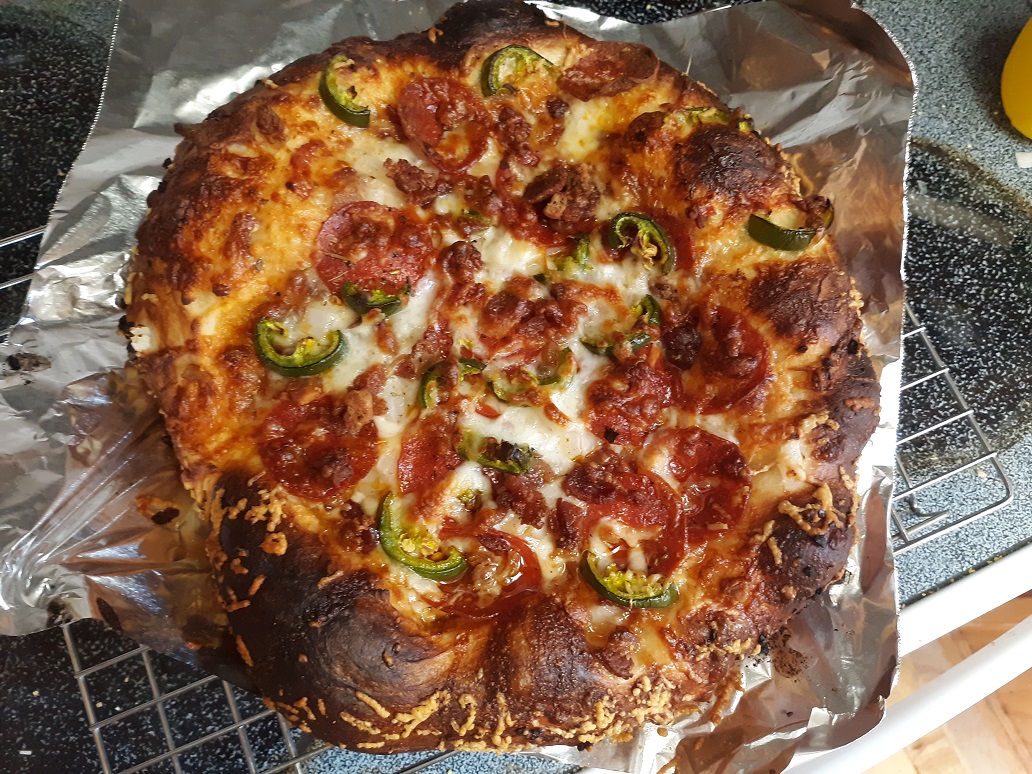 Back in June, I made an absolutely amazing pizza. Seriously, the pizza was good. Maribou said something like “if I went out to a restaurant and paid $20 for this, I wouldn’t walk away disappointed”. My attitude was “this pizza was so good, I need to share it with my Ordinary Time family.”

In comments, I was told to try a pizza stone. A pizza stone? You have to heat up the oven for an hour beforehand. Only THEN do you start baking your pizza. Dunno about you, but that’s crazy talk from where I sit. On top of that, it’s summertime. It’s one thing to have the oven on for the time it takes to preheat and cook the food. Quite another to just turn the oven on and walk away for an hour.

But I did my research and by that I mean that I talked to Maribou and she did research and found that this one gave the best bang for the buck. The main downside? Forty bucks! That’s a lot! That’s dinner for two! That’s an entertainment budget! But it might improve food somewhat (and it’s not like we eat out even a tenth as much as we used to)… so I said that we should go for it.

The first time I made a pizza, I realized that I didn’t know how to transfer it from the prep space to the stone. The previous pizza, the parbaked one, was made on the pizza pan itself. That wouldn’t work to transfer stuff. So I got one of the little floppy cutting boards we have in the little “miscellaneous” cabinet and tried that. I failed to get the pizza smoothly onto the stone. The pizza lost its shape, I lost a few toppings. This happened again later with a second pizza. Both pizzas were good, mind… they were just vaguely misshapen. Like the dented cans in the cart of the back of the supermarket being sold for half off.

There was nothing WRONG with them… but I kinda resented them anyway.

And then I figured it out! And so I… well, I’ll show you.

This is what the pizza stone looks like after 3 failed prepboard transfers:

See? The worst! Anyway, I started up the oven to 500 degrees. Then I got out my floppy cutting board and my corn meal: 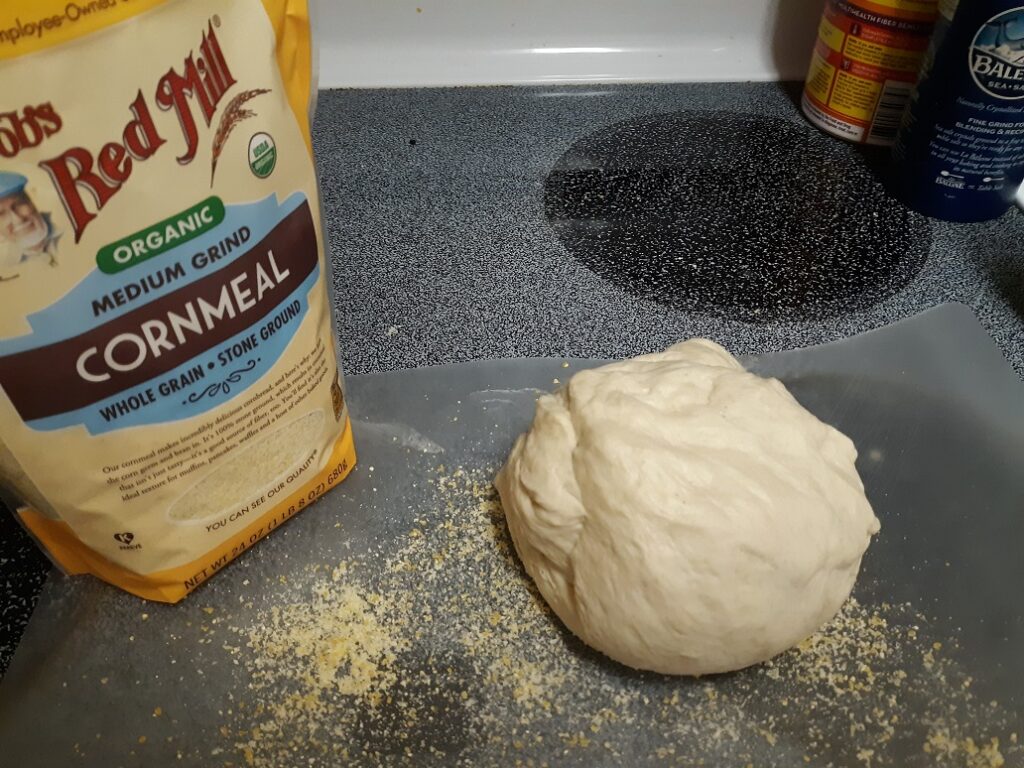 I threw a pinch of meal onto the board and then dropped the dough onto it. THEN I moved the dough off to the side, onto a surface that isn’t the oven. (The last time I tried this, I left the dough on top of the oven and the 500 degrees was hot enough that it had started baking the dough to the board. So I had to deal with that.)

I wandered away to the basement for an hour. After an hour, the dough had risen and warmed to room temperature and it was ready for doctoring: 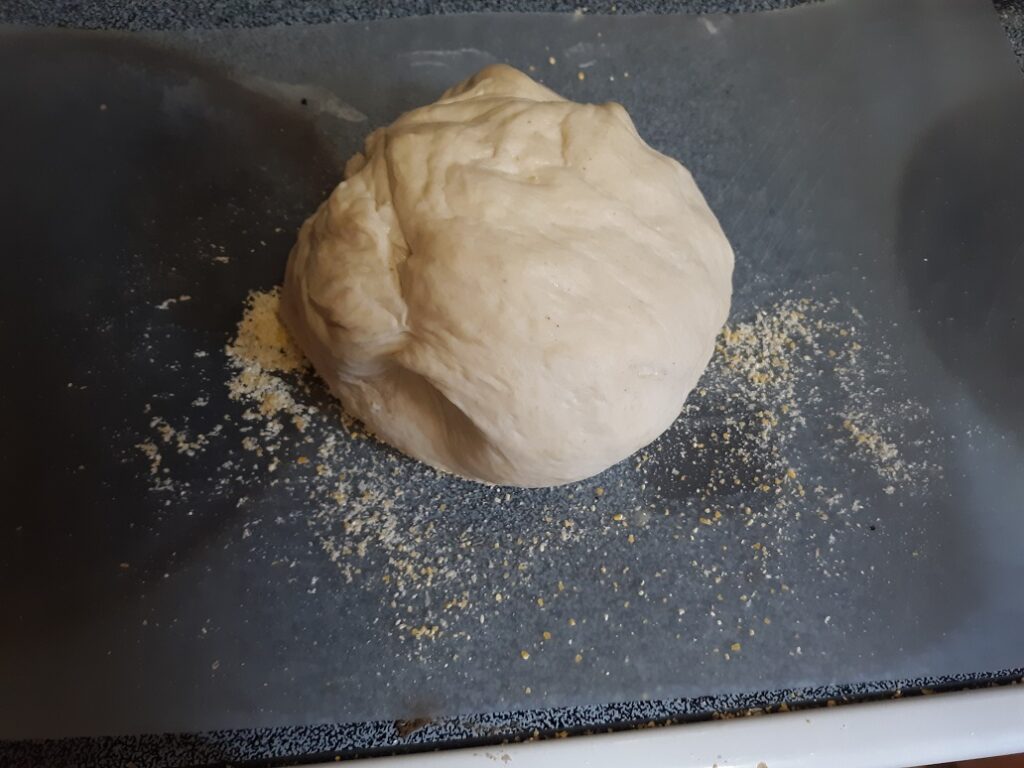 Instead of leaving it on the corn mealed cutting board, I instead transferred the dough to some aluminum foil! Ha! It’ll conduct the heat with zero problem and I’ll be able to transfer it too and from the oven without incident! So I tossed it and practiced the old “pizza parlor spinning in the air” trick and got a nice disc: 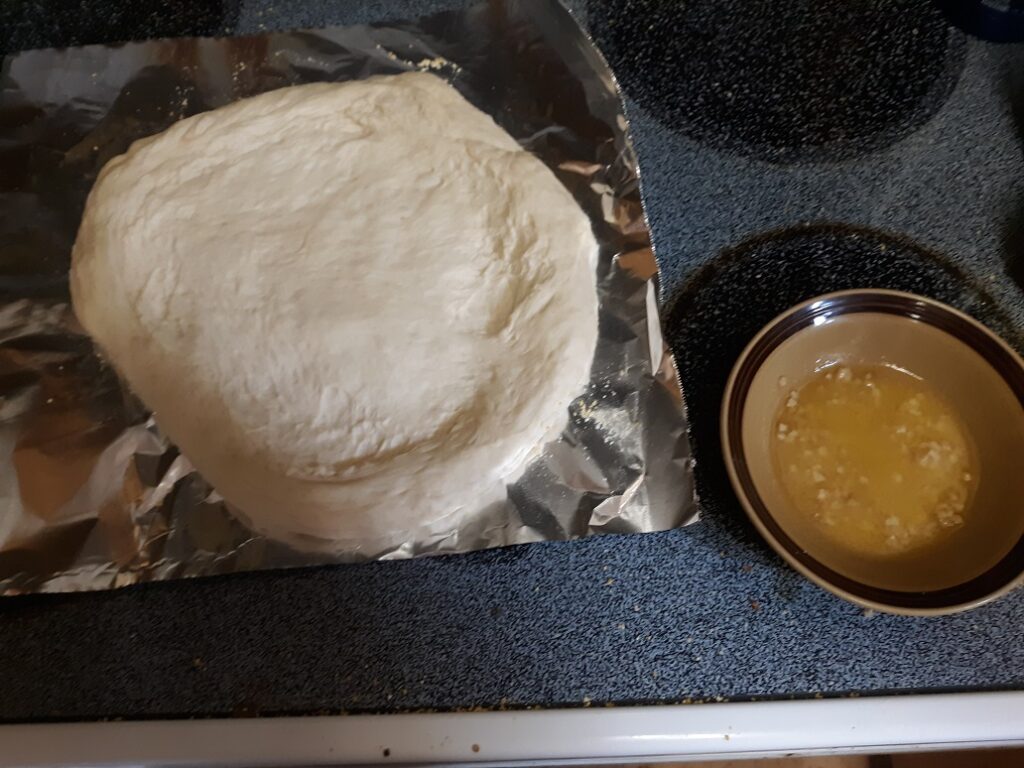 And I put my garlic/butter on it: 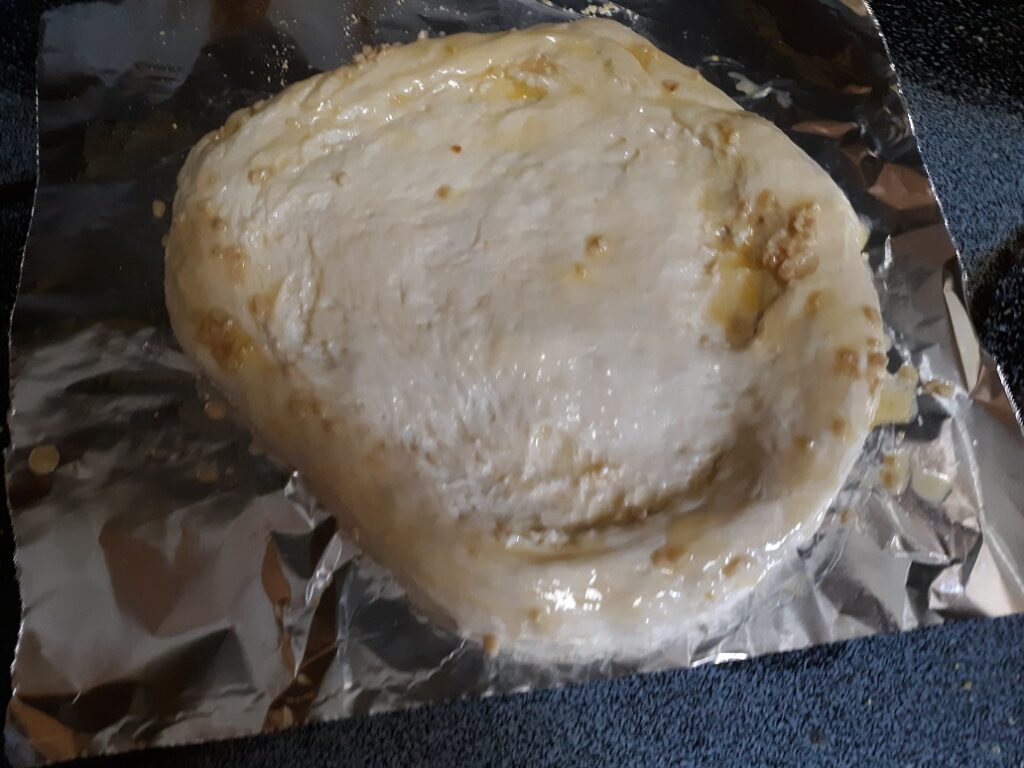 And then the homemade sauce: 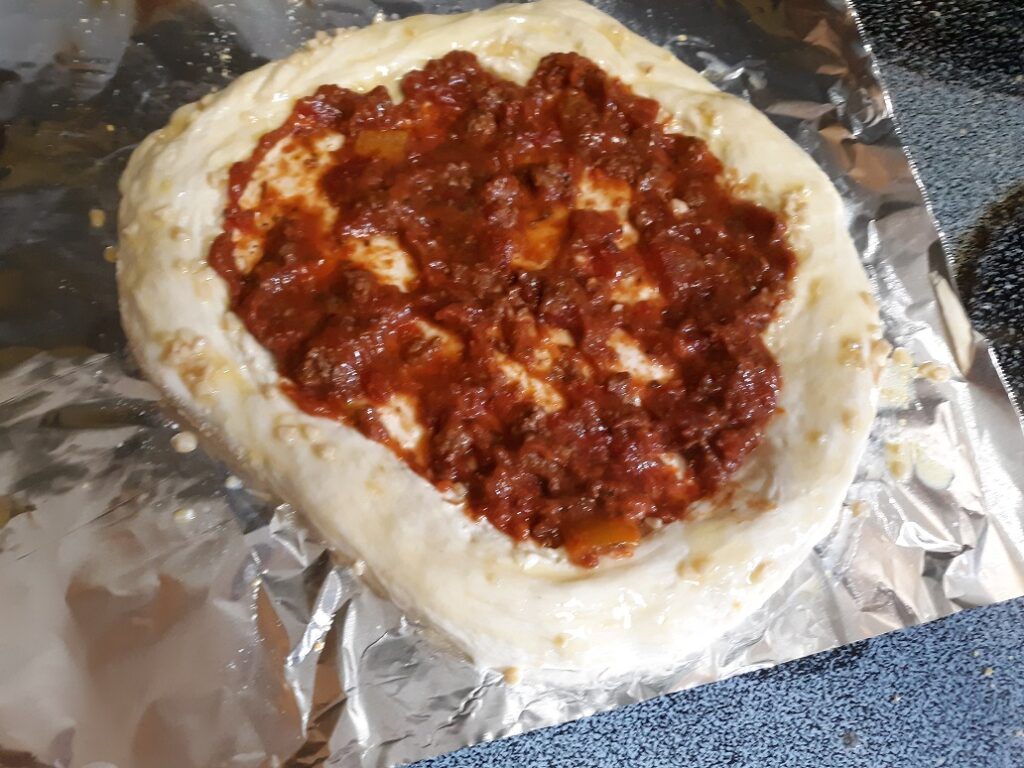 And then the cheese (and I prepped the other toppings): 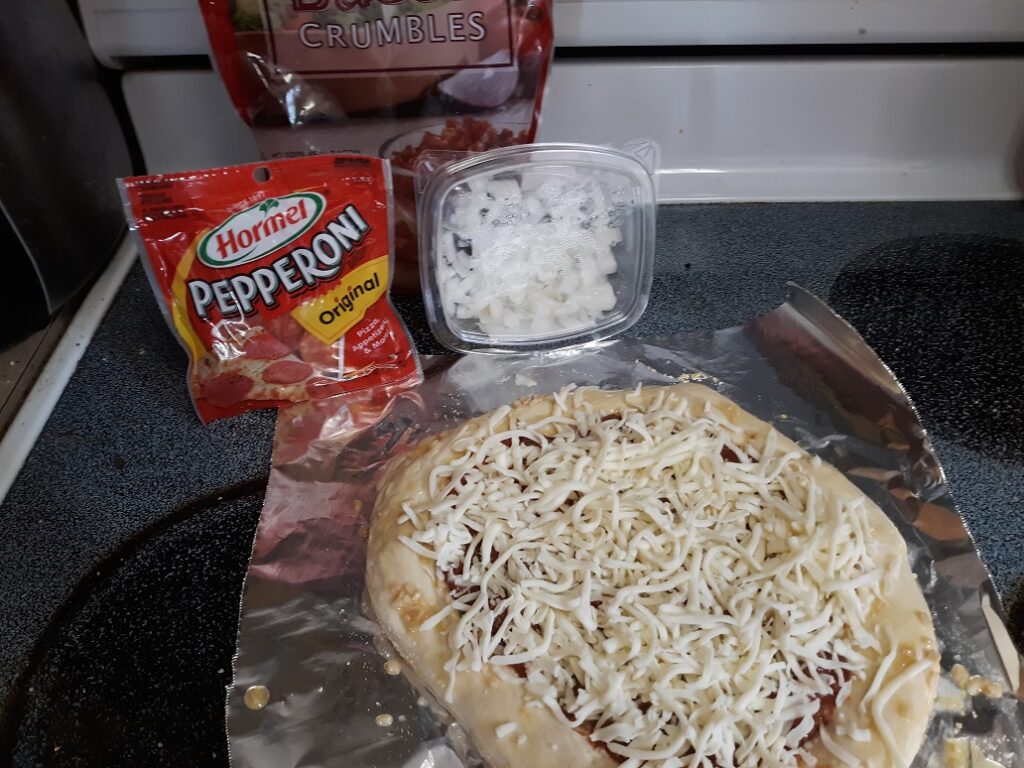 And then I put on the toppings: 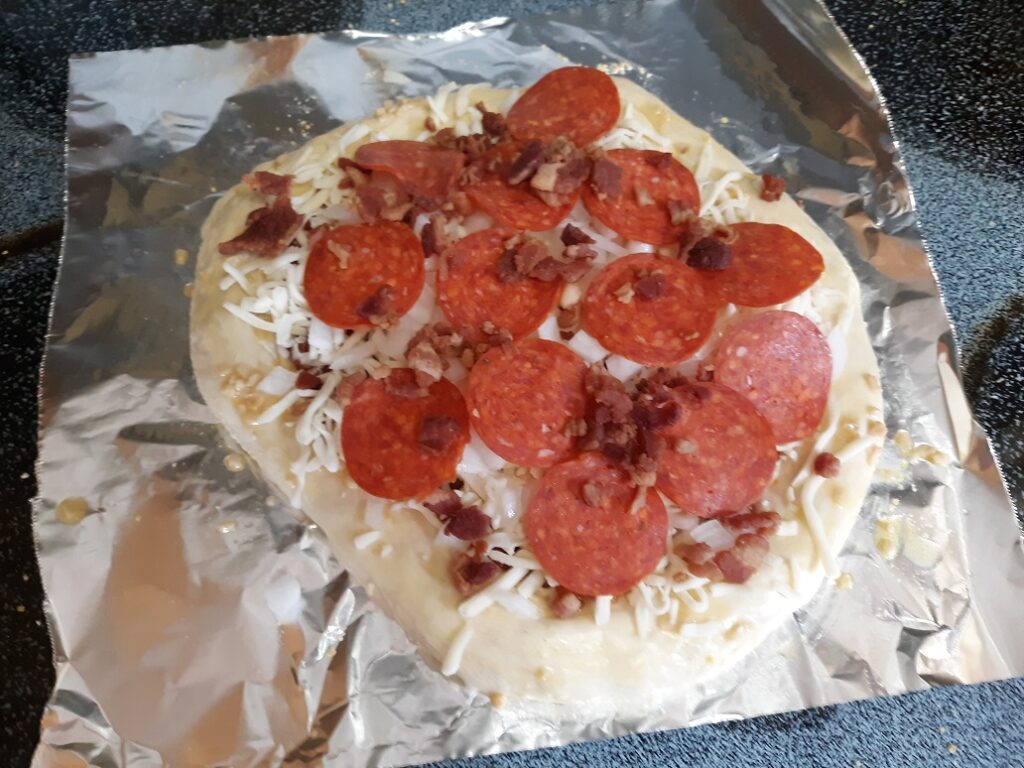 And then I remembered that I had an extra jalapeño lying around! 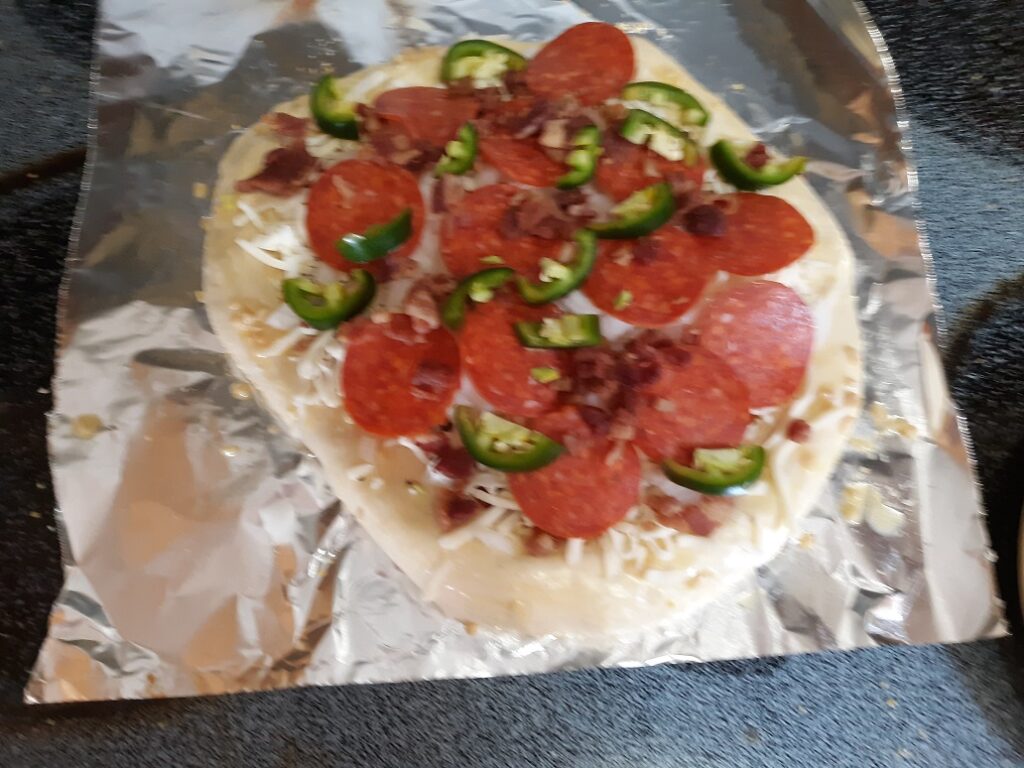 Put on some fresh cracked black pepper, some spice from the Italian Spice grinder, and some finishing cheese (oooh, and some parm around the buttered crust): 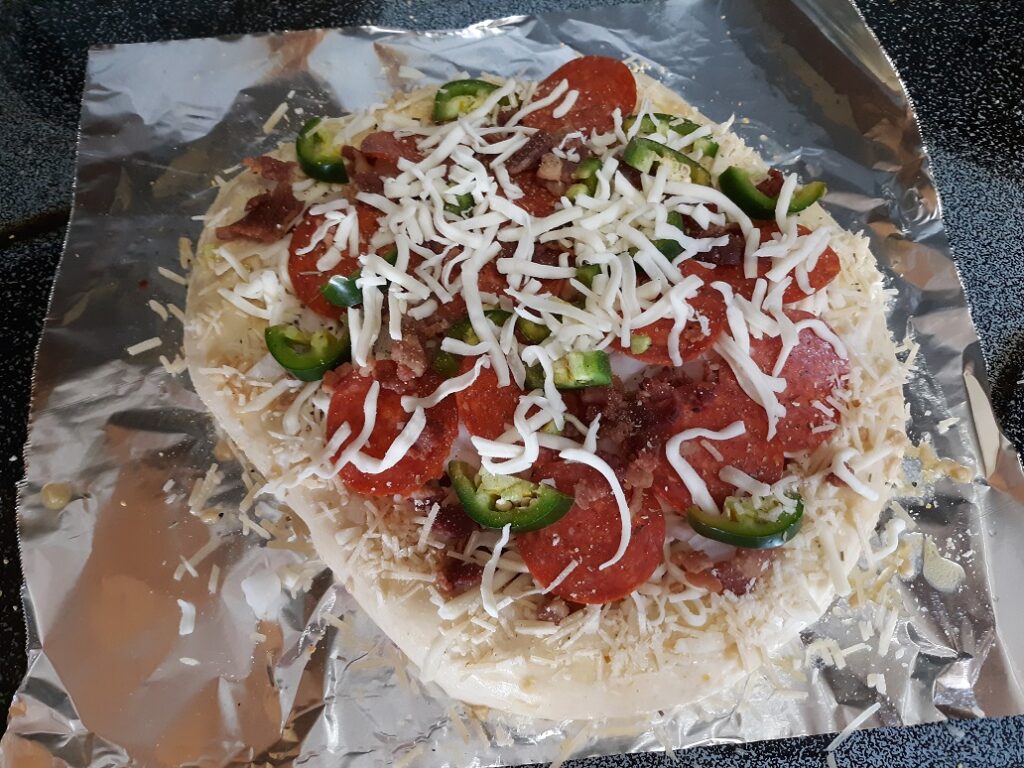 And then an effortless transfer to the pizza stone: 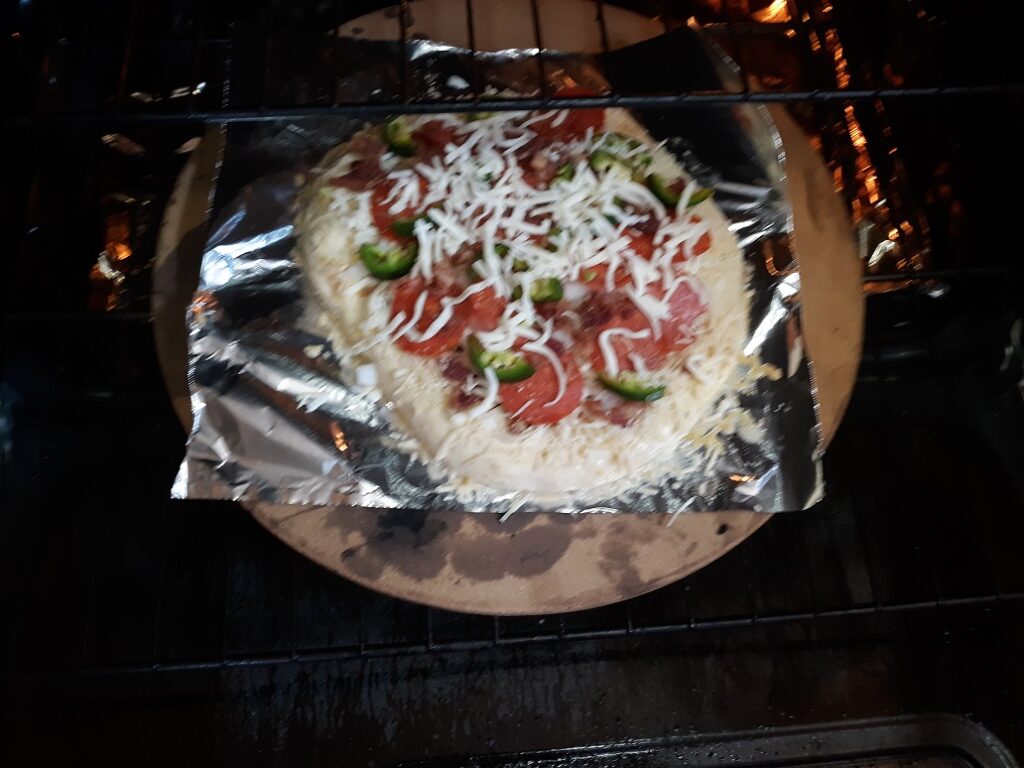 And then wander to the basement and start a timer for 14 minutes: 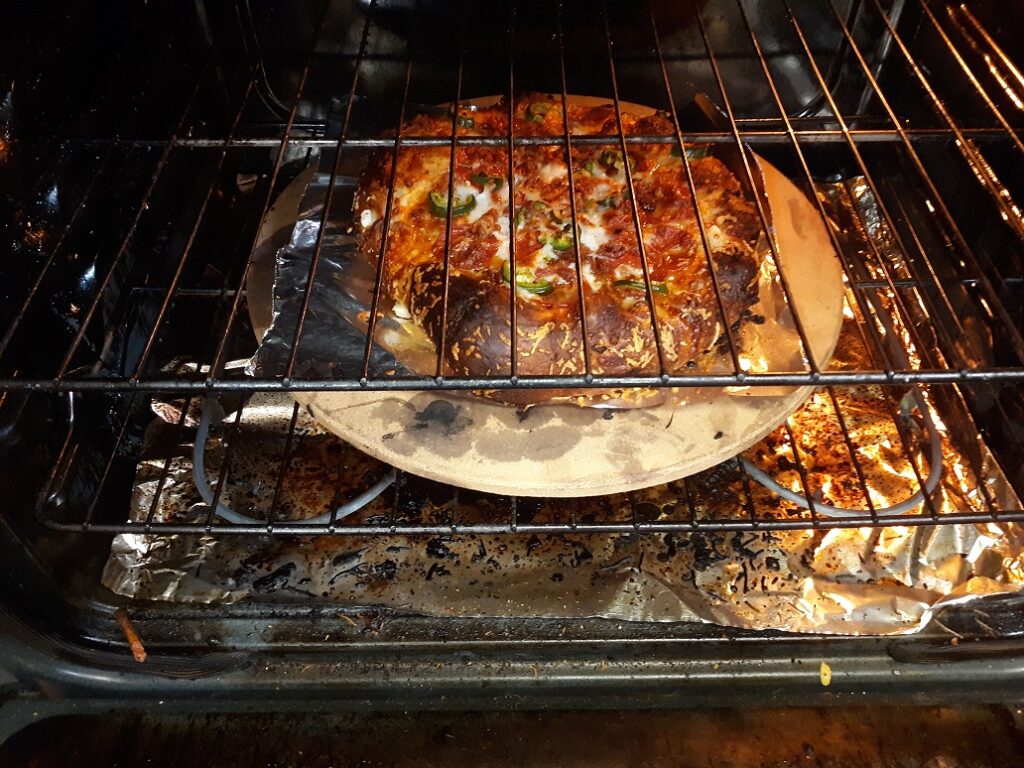 You might be tempted to say “That crust is burnt!” but it’s not. That’s the butter. I might say that the crust is something closer to “pretzeled”. Behold: 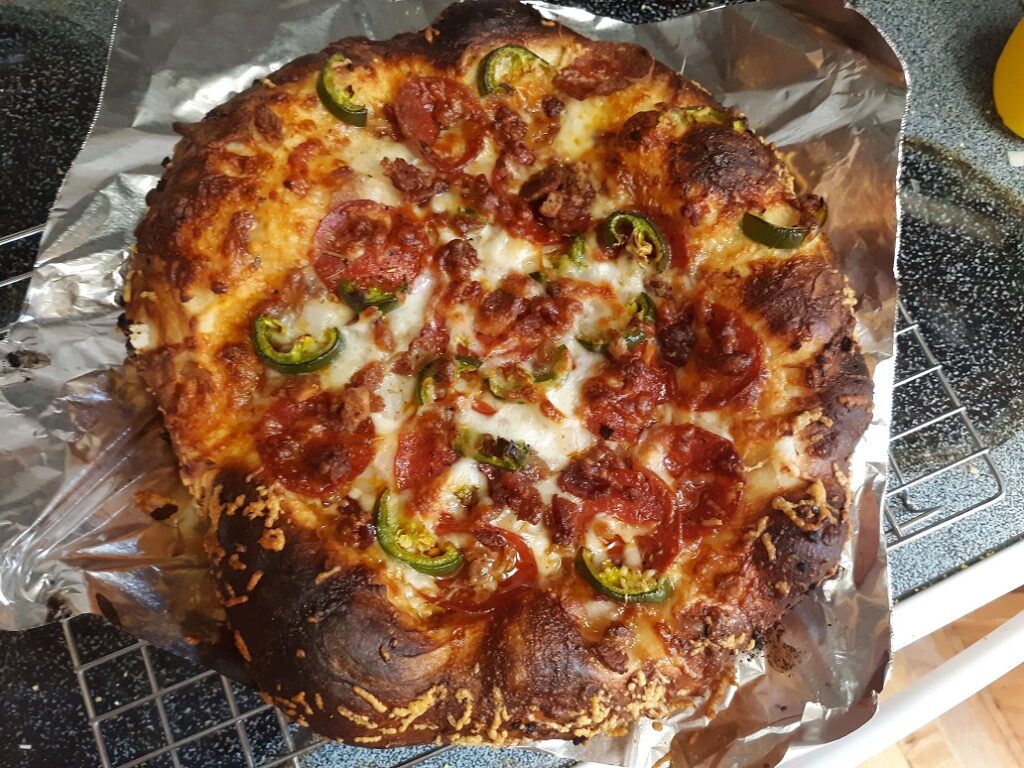 After I put it on the rack, I did some light cleanup and then, after a minute or two, I gently peeled the foil away from the bottom of the pizza. (It peeled off easily and without catastrophe.) I let it just sit on the rack for a few more minutes, finishing in its own residual heat and then I cut it. The crust was crunchy on the outside millimeter and fluffy like a cloud inside.

Here, check out these closeups: 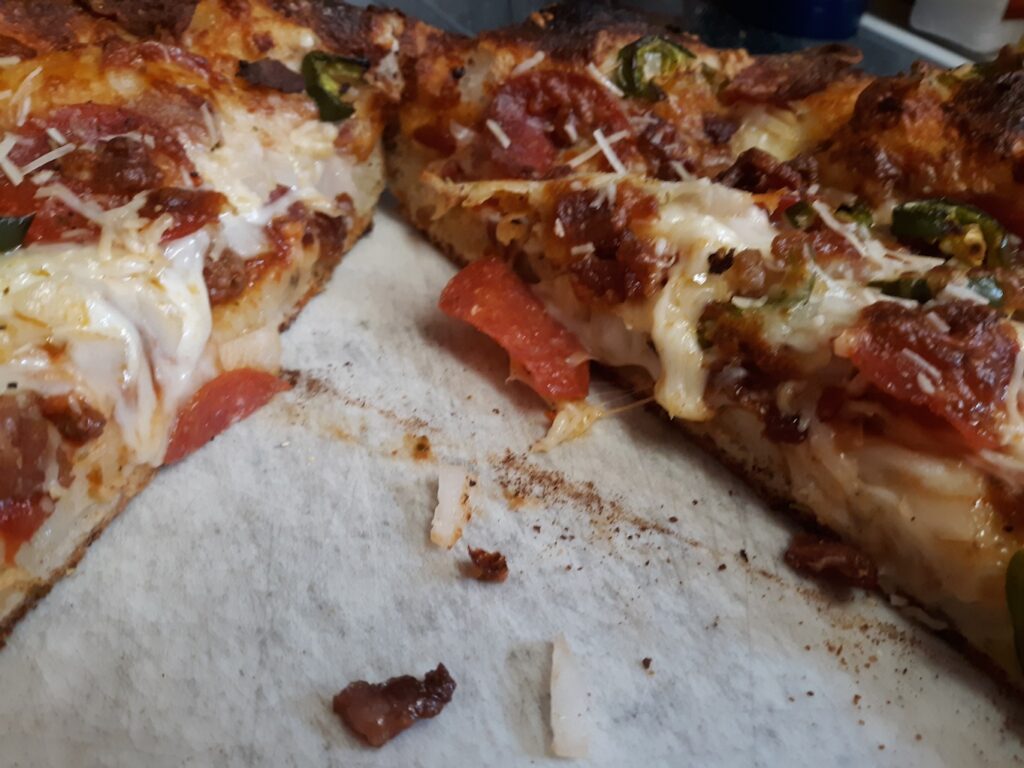 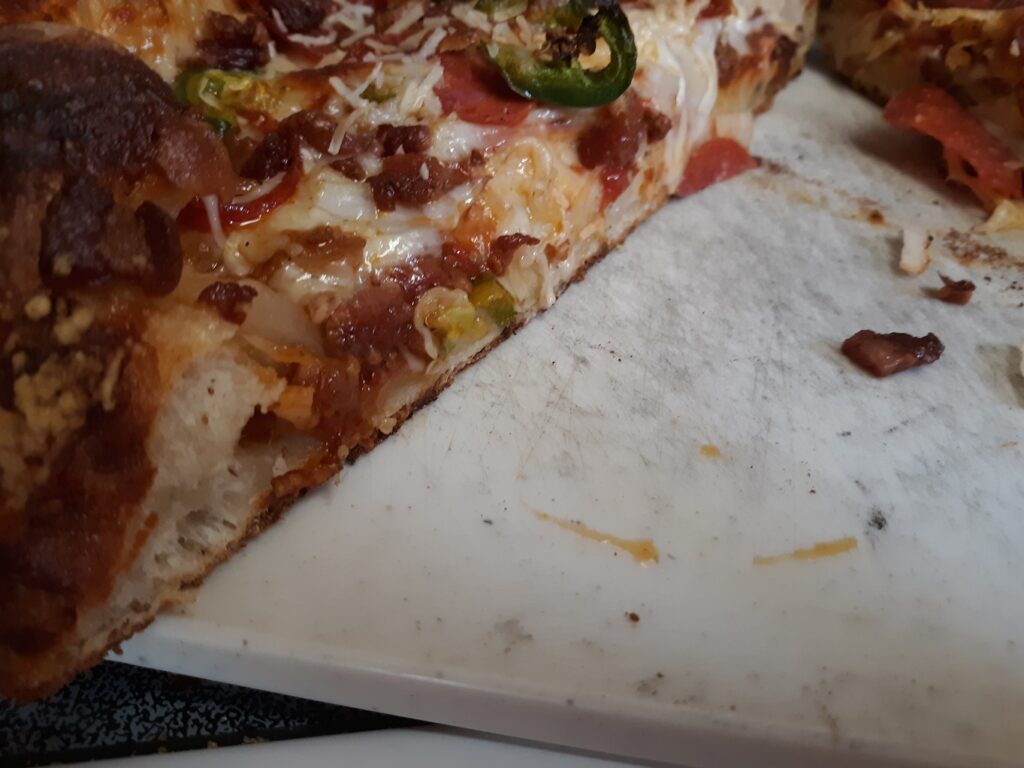 As I finished the first half of the pizza in the basement, I asked myself “is that the best pizza you’ve ever eaten?”

The answer is “I don’t know”. I’ve had a lot of really good pizzas. Some of them made by artisanal artists, some of them enhanced by being in Athens, Ohio in 1993 and eating them with a red-haired hippie, some of them eaten at age 7 with the entire family sitting at the table.

But, to look at it again, I’ve had a lot of really good pizzas. I don’t know that this wasn’t the best one I’ve ever had.

The next day, I thought “I should give it the microwave test” on the remaining half. We’ve all had pizza that was pretty good, or good enough, hot from the box but was a complete disappointment the next day… this pizza was not that. It was amazing the next morning after being refrigerated all night and then reheated in the microwave. So, seriously, it might be the best pizza I’ve ever had. I mean, it might NOT be… but I don’t know. It might be.

And it’s pizza that didn’t require an extraordinary amount of effort. Sure, I had homemade spaghetti sauce, but I make that all the time. It has the hippie dippy pizza dough from Whole Foods, but that’s only $3. Every other ingredient is stuff that I have lying around anyway. 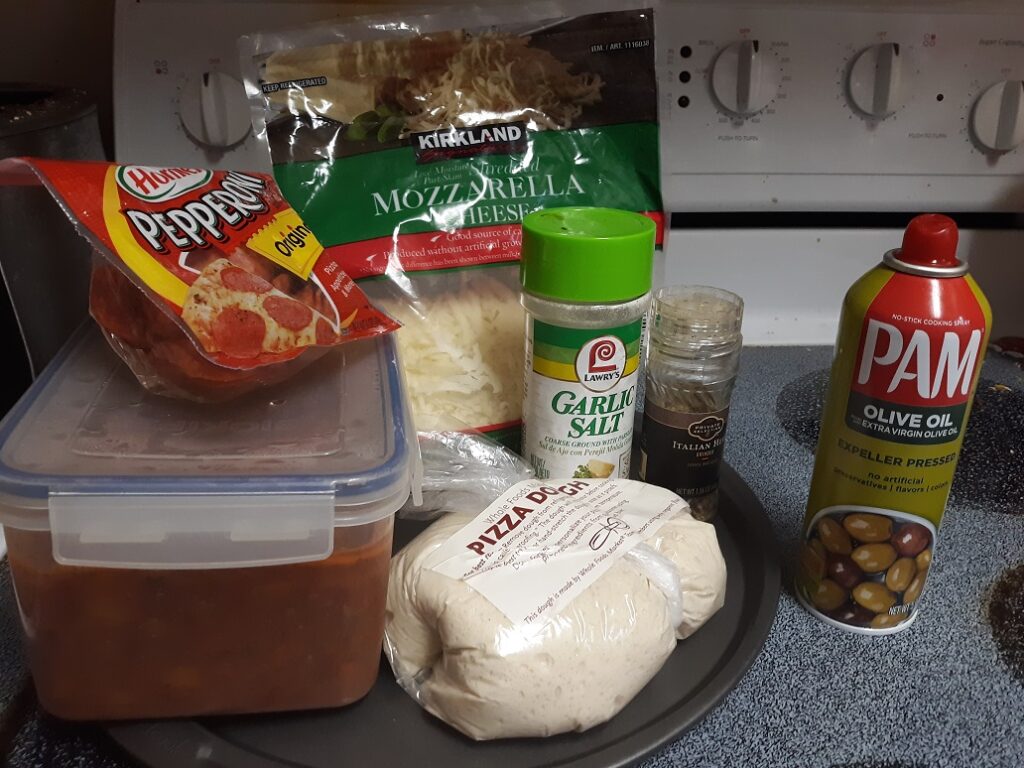 If you love pizza, and I mean, enough to forego a date night for it. Enough to skip a video game for it… you should get a pizza stone.

(Featured image is the cooked pizza on the stone. Taken by the author.)