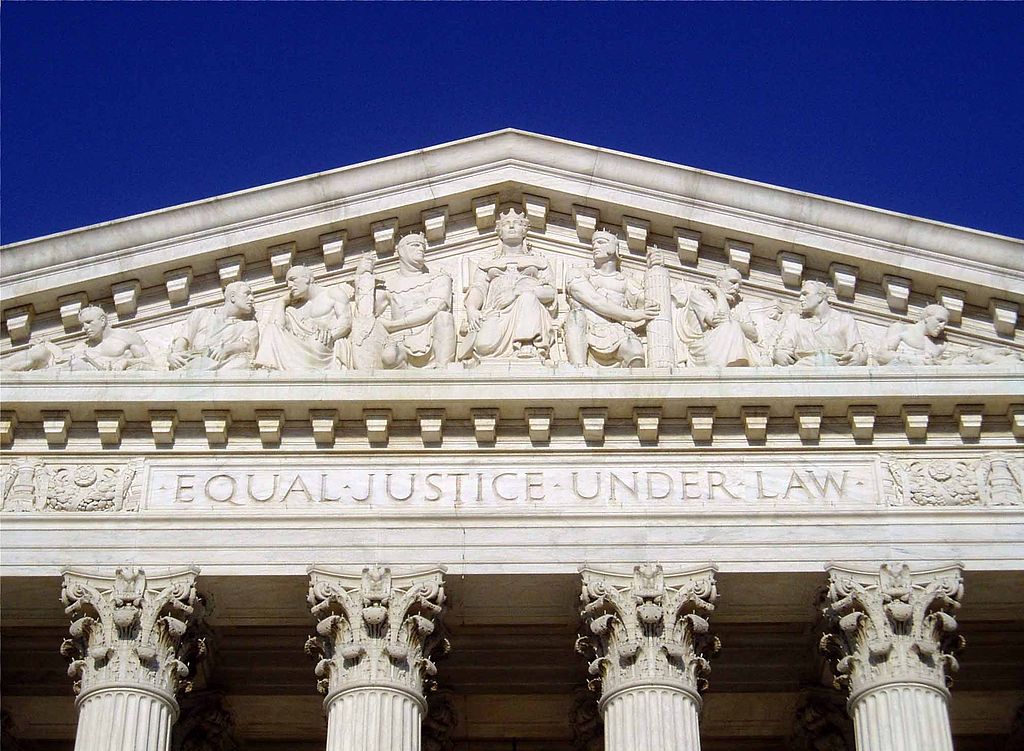 The inscription Equal Justice Under Law as seen on the frieze of the United States Supreme Court building, 8 May 2005
Photo by MattWade Via Wikimedia Commons

The Supreme Court released two of its five remaining decisions today; both were 7-2 and both were a victory for the religious.

The first case, Our Lady of Guadalupe v. Morrissey (consolidated with St. James School v. Biel) held that teachers at religious schools are not permitted to sue their employer for discrimination. Morrissey had claimed she was fired to make way for a younger teacher, and Biel contended she was fired for requesting a leave of absence for cancer treatment.

The schools claimed the lawsuits were impermissible because of the “ministerial exception,” which permits churches to choose its clergy in accordance with the church’s beliefs. This doctrine was upheld in 2011 in Hosanna-Tabor Evangelical Lutheran Church and School v. EEOC. The teachers involved in today’s decision argued, and the 9th Circuit agreed, that they were not ministers and that the rule did not bar their suits. Justice Alito, joined by Thomas, Roberts, Gorsuch, Kavanaugh, Breyer and Kagan, wrote the decision, reasoning that the teachers’ roles in imparting Catholic doctrine to their students as required by their employer, was within the spirit of the ministerial exception, and thus, they could not sue.

The Court reaches this result even though the teachers taught primarily secular subjects,  lacked substantial religious titles and training, and were not even required to be Catholic. In foreclosing the teachers’ claims, the Court skews the facts, ignores the applicable standard of review, and collapses Hosanna-Tabor’s careful analysis into a single consideration: whether a church thinks its employees play an important religious role. Because that simplistic approach has no basis in law and strips thousands of schoolteachers of their legal protections, I respectfully dissent.

The Court’s ruling in this case is interesting, in light of the Bostock decision a few weeks ago which extended federal discrimination laws to cover sexual orientation. After its announcement, many decried an impingement upon the religious liberty of those who wished to exclude LGBTQ+ folks from their employ. This decision alleviates that concern, at least as far as church-based schools.

Specifically, the Little Sisters challenged the “self-certification” that provided for employers to fill out a form certifying that their sincerely held beliefs prevented them from providing contraceptive coverage, which would trigger coverage by the government. Little Sisters felt this made them complicit in providing contraception, and the requirement violated the Religious Freedom Restoration Act. The issue made it to SCOTUS once before, but was remanded when the government agreed not to require the employer to provide certification.

However, the government ultimately deemed it was not possible to provide coverage without the certification process. In 2017 they issued two rules, one of which broadened the definition of who was exempt from the mandate, including for-profit and publicly traded companies with the aforementioned objections, citing the RFRA. The exemption meant these corporations did not have to participate in the certification process; the mandate simply didn’t apply to them. The second rule provided for “moral” objections, rather than religious. The rules were subject to a public comment period after their promulgation. The Commonwealth of Pennsylvania sued, resulting in today’s opinion.

The state’s argument was that the rules were defective because the departments promulgating them – HHS, Labor, and Treasury- did not have the authority to create the exemptions. They also argue that the rules were procedurally defective due to a failure by the government to follow notice and comment procedures required by the Administrative Procedures Act.

Justice Thomas wrote the majority opinion, joined by Justices Roberts, Alito, Gorsuch, and Kavanaugh. He cites the ACA itself as giving the HRSA the authority to exempt certain entities from the mandate.

This provision of the ACA states that, “with respect to women,” “[a] group health
plan and a health insurance issuer offering group or individual health insurance coverage shall, at a minimum provide . . . such additional preventive care and screenings not described in paragraph (1) as provided for in comprehensive
guidelines supported by [HRSA].”

Using an expansive interpretation of the phrase “as provided by” to mean “in whatever manner it chooses,” the Court held that the ACA gave the Health Resources and Services Administration division of HHS the broad right to define what women’s preventative health services must be covered, and more broadly, the right to decide who is exempt from its provisions. Thomas offers on opinion on the argument made by Justice Ginsburg dissent, that this interpretation thwarts the ACA’s intent to ensure women have access to birth control without cost-sharing obligations, asserting instead that the decision rests solely on the text of the ACA itself. The Court further opined that the government was correct in considering the RFRA when crafting the exception.

As to the procedural issue, Thomas rejected the state’s argument that the government failed to comply with notice and comment provisions of the APA. The state contended that the fact that the rule was not revised or amended following the receipt of public comment is evidence that the Departments did not “keep an open mind” to the criticisms and suggestions of commenters. Thomas found this of no importance: “Rather than adopting this [open mindedness] test, we focus our inquiry on whether the Departments satisfied the APA’s objective criteria, just as we have in previous cases. We conclude that they did.”

Alito wrote separately, joined by Gorsuch, to express his opinion that not only was the HRSA permitted to consider the RFRA in its decision, but that the RFRA required the exemption. This is a meatier “religious freedom” argument than that of the majority, which rests upon technicalities and procedure.

Liberal Justices Kagan and Breyer concurred in the opinion that HRSA had the right to create exemptions to the mandate, but joined in a concurrence written by Kagan that left open the possibility that a lower court could still find the HRSA’s actions of this kind “arbitrary and capricious”, and noted that the exemption may be overly broad in applying to publicly traded corporations with “moral objections”.

In a dissent joined by Justice Sotomayor, Justice Ginsburg writes “In accommodating claims of religious freedom, this Court has taken a balanced approach, one that does not allow the religious beliefs of some to overwhelm the rights and interests of others who do not share those beliefs… Today, for the first time, the Court casts totally aside countervailing rights and interests in its zeal to secure religious rights to the nth degree.” She disagrees that the authority to craft exemptions is implied in the text of the ACA; while Thomas says that the absence of a prohibition against such exemptions means no such prohibition exists, Ginsburg argues that where no such authority is expressed, it cannot be read in.

Ginsburg outlines the substantial ramifications of the decision, which by the government’s own estimate could leave up to 126,000 women without contraceptive coverage. The government suggests these women either apply for assistance through Medicaid- an option only for low income women in certain states- or pay out of pocket. All of these alternatives, Ginsburg argues, present a substantial burden on women- and accommodations for religious beliefs should end where they begin to interfere with the rights of others.

As noted in Kagan’s concurrence, the fight may continue over the exemptions, as nothing in the majority opinion prevents a challenge on the grounds that the rule was “arbitrary and capricious”, but for now, the exemption survives and those who lose coverage for their contraception are without recourse to enforce their rights under the ACA.

Overall, today is a banner day for religious institutions, who may now fire their employees for even discriminatory reasons without legal repercussions, so long as they can fit the employee’s duties into a “ministerial” function, and do their level best to prevent their female employees from preventing unwanted pregnancy. Today presents either a moment for celebration or one for lamentation, depending on your perspective.