Forest Music: A Review of Other Other by Seabuckthorn 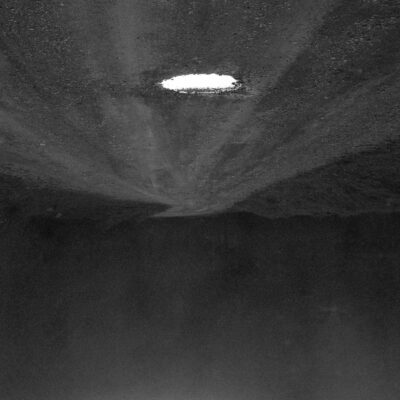 Angels, I am told, sing in clear, pure tones. Man, on the other hand, sings in roughened, time-weathered voices. The hymns may be the same but the notion of rightness, confluence, aptness is, quite literally, worlds apart. There is no human singing on Seabuckthorn’s Other Other—it doesn’t need any—instead the voices sing with horsehair and steel and worn, loved luthiered boxes. Guitars. A banjo. A Persian bağlama, or saz. These are the voices mankind made. From these and some post-processing Andy Cartwright builds highly textured, moving music. Those voices are in many ways as human as those made not by hands but by earthly vocal cords.

This is music whose timbres are meant to travel the cambered ancient paths over folds of forested hill — and mountain — sides in tired, muddied boots. It’s all movement and personal landmarks: This is solitary, back country music. Music for introverts of an unquiet disposition.

The best instrumental albums, to my mind, have a sense of narrative, each song fitting into its place between and the overall structure of the album: Storytelling without words. Mood and color and timbre and rhythm and texture combine to tell a story each listener creates in the listening, each story, each listening sui generis.

Other Other isn’t—but the music, nonetheless, often feels—accidental: As if the various hums and drones and plucked and bowed tones just happened to occur in the way they do—see the two parts of “Come Eluding”—and it is the listener who discovers chords and melody, constructing the sound for him- or herself each listening of a piece, somewhat reminiscent of Feel Free by Duane Pitre.

Good storytelling is composed this same way so that, to the reader or hearer, the story feels natural, not improvised — to tell a good story there has to be a story behind it, after all — but rather a story new made in the telling, the way a grandmother might retell a story from her childhood but mould it for her particular audience.

The opening song, “Where The Road Gets To”, is all scraping and swelling chords suggestive of Macbeth, both the play and the 2015 Justin Kurzel film, all foggy and rounded and craggy foreboding. Light, distant cymbals sojourn a rhythm of their own and you can imagine Banquo inquiring of the Witches “Are you living or aught that man may question?” and wonder at what answer these other witches on this other rocky heath might provide.

Listening through headphones, one is immediately immersed in a spacious, darkened, colorless forest. Swelling menace is offset by the tension of being pursued, such as in “Meridian II”. There are dark things in the weald. Ancient peoples rightly feared them. Wolves, bears, unheimlich things perhaps not of this world. Other Other plunges us into this space, as remote and unyielding as it is immediate and unfriendly.

Paul Kingsnorth’s novel The Wake and also, perhaps moreso, its sequel Beast, explored, in part, brutalist isolation. This album could easily soundtrack a film version of either. It’s not that there isn’t hope, it’s that hope is so slim as to become the only thing to be grasped at and to presume the grasping is in vain, as it goes.

This music breathes. It moves by touch and feel more than by any rhythmic propulsion, for the most part, and where rhythm takes the fore—“The Coals Lower and Lower” is a pulse-quickening menace slowing to despair—it is with accidentals and echoes and implied rhythms rather than carefully charted beats.

When rhythm is less important, it serves the swelling scene. “It Will Be Dark By Then” is rhythmic but like an advancing storm rather than the storm itself. The song has an aching tonal call, reminiscent of whalesong, or—Seabuckthorn traversed the sea in 2015 on They Hunted Most Thickly — more aptly here, the sound is that cry of an aching owl.

The final track, “Four O’Clock in the Morning Courage”, begins with what I dare to call hope, a dawn chorus or an anthem for the morning: A slowly arpeggiated major chord swelling and joined by less tamed sounds weaving themselves in as they please and just before all these tones are about to resolve they vanish, and only their echoes remain.

A story has been told. To each listener the story is unique and personal. The swells of tension have passed into something only the hearer can name.

He rests; he has traveled.

Other Other is released by Fluid-Audio and is available on limited edition double mini cd and digital .