The Confederate Flags of Comer’s Store 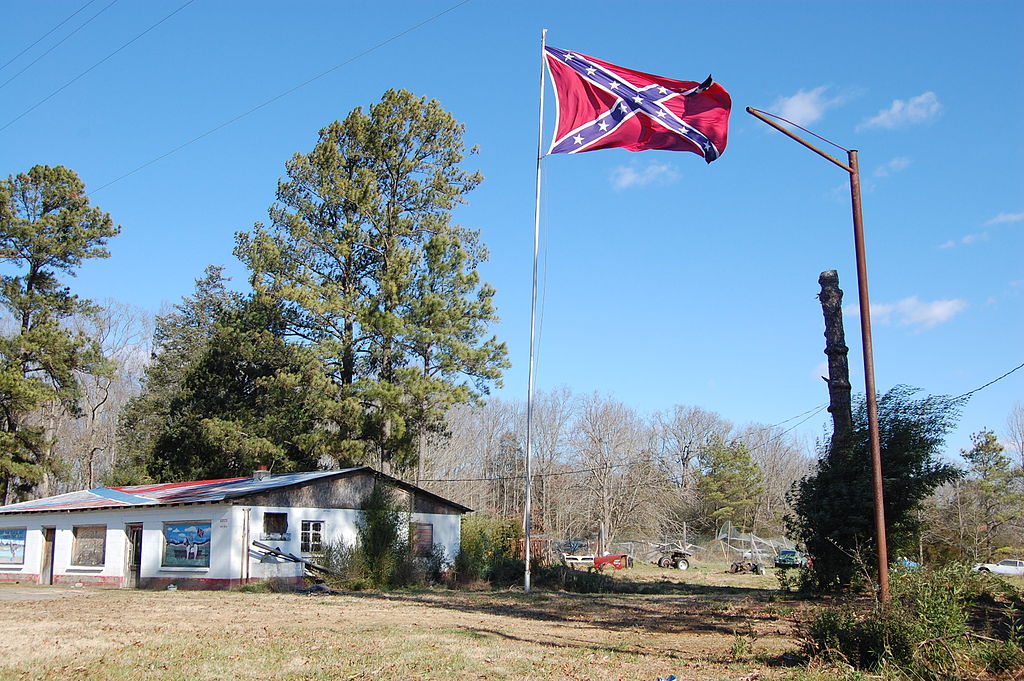 The Lost Cause remembered in rural Randolph County, North Carolina. Confederate battle flag and the roof and General Lee painted on the side give no question as to how The South is viewed here along HWY 42. Photo by Donald Lee Pardue via Wikimedia

I was born at the midpoint of the 20th century, old enough to have a grandmother whose father fought with General Lee, finishing the war with him at Appomattox. As a boy, I spent wonderful summer weeks with this “daughter of the Confederacy” at her home in Gaston County. Her home, if not for the highway department’s displacement of it, would be smack dab in the middle of the I85/US74 exchange at the base of Crowder’s Mountain with a Stuckey’s barn beside it.

My summer stays there always included a visit to Comer’s Store, a quarter mile east toward Gastonia. Walking to the store with my cousin, we first passed two incongruously nice brick houses occupied by mysterious Black folks who inexplicably did not work for white farmers in their fields. These very quiet people got along well with the neighbors, including my grandmother, who referred to them as “darkies.” This term, with its nail-scratching jar to our 21st century ears, actually was my grandmother’s way of being nice and even open minded, in contrast to a different designation commonly heard in 1960. I was curious about how these Black neighbors managed to be planted where they were. As Blacks, where could they possibly have gotten the money for those houses that were bigger and better than my grandmother’s farm house? But soon this pondering ended with my eyes brought back to an environmental element of the South that seemed more normal. Above us, on a prominence chosen to catch the eyes of Florida snowbirds en route to New York, there was a huge billboard, demanding in George Wallace boldness: “Impeach Earl Warren.”

I had no clue about who Earl Warren was, but my grandmother made me aware that the sign had been placed there by the owner of Comer’s gas station and soda fountain, where we were headed. Passing the “No Coloreds Allowed” sign above the bathroom door and a single gas pump we entered the store, even as a white boy, I had a slight twinge of anxiousness in response to the demeanor of the proprietor. The owner, already old to my ten-year-old eyes, seemed to view my cousin and me as having considerable potential as Mars Bar shoplifters, so we were watched closely. But once it was verified that the nickels and dimes were in order, he seemed more relaxed and okay with us sitting at one of his booths to enjoy our Coca Colas and peanuts. The sign above the outside bathroom door did not even catch our attention, since “Whites Only” messages had nothing to do with us or any of the children we knew as friends. It did occur to me, however, that it was odd to have such signs in places where all the people present were obviously white. While we had enough change for a Coke or an RC, other merchandise on display was beyond our economic reach mostly. But that did not keep us from imagining future acquisitions.

The walls were covered with Confederate flags of all sizes and some were cheap enough to consider saving for. These flags were in a whole different category from American flags. The American flag was a sacred object that could only be touched in a certain way and required elaborate display and interaction protocols. But the Confederate battle flag was a banner under which to imagine how a boy might attain manliness and power. As children, we had no idea what principles of government or causes it represented. It was just a cool, brightly colored banner that could help a lad feel strong and bold. It was what you used to cap off a fort or a tree house you built in the woods. It was a streamer to be placed on the rear carrier of your silver Sears bike. And later, it was what you put in the front license plate holder to establish emotional ownership of a “new” 48 Ford just bought with your Winn Dixie bag boy earnings. Catching bugs on its way to Myrtle Beach for a few days of wild teenage freedom, it declared: We are proud and feisty Southern boys and we will not be made to feel inferior to the Yankees running the country .

Oddly, in 1960 and for many years after in my mind, that flag had no relationship whatsoever to Blacks living in the dilapidated structures of Kings Mountain’s “colored town” where my dad went to recruit cotton pickers in September. It had no connection in my mind to the obvious discomfort of Black teenagers coming for the first time to use a new high school building with “us” in 1965. As teens during the whole decade of the 60s, most of “us” were utterly unaware of far off events. The bombing of churches in Montgomery seemed like a terrible thing done by individuals we might now call “bad apples” in Alabama, a distant place with a loud governor. For me, it took many years to see how much pain and suffering has been caused by the ideas and ideals of white supremacy.

It took even longer to recognize the clever ways that we have been seduced into being quiet cogs in the oblivious culture that can’t see racism in our flags and monuments. The monuments and flags made us white Southerners feel — instead of the progeny of defeated defenders of human cruelty — like just good ordinary people who appreciate “our heritage.” To my child mind in 1960 the Confederate flag never was intended to hurt anybody. As a pedagogic device, Mr. Comer’s flags for sale worked much better than the angry and confusing “Impeach Earl Warren” billboard that he sponsored. Mr. Comer used those flags to efficiently recruit me and others of my generation into a special kind of passive, blind and “nice” racism. This kind of racism has no anger in it, but it is racism nevertheless — on autopilot. It is time now to remove the shackles from our eyes as we remove the monuments and take steps to ostracize the offensive flags.

We must let our white neighbors know that, in 2020, Rebel flags no longer express strength. No matter whether tattered rags above shanties or defiantly displayed on high poles in view of the Interstate, or waved at the Charlotte Motor Speedway, they implicate us all. As outdated as an Impeach Earl Warren billboard, they no longer can be written off as adolescents’ benign attempts to feel manly or as history lessons. They are symbols of violence and hate that need to be buried alongside our misguided Confederate ancestors. In death’s resigned acceptance, the souls of General Lee and my great grandfather will be less burdened.

Timothy Webster is a retired psychologist in North Carolina. His ancestors first became a part of the American South in the 17th and 18th centuries.