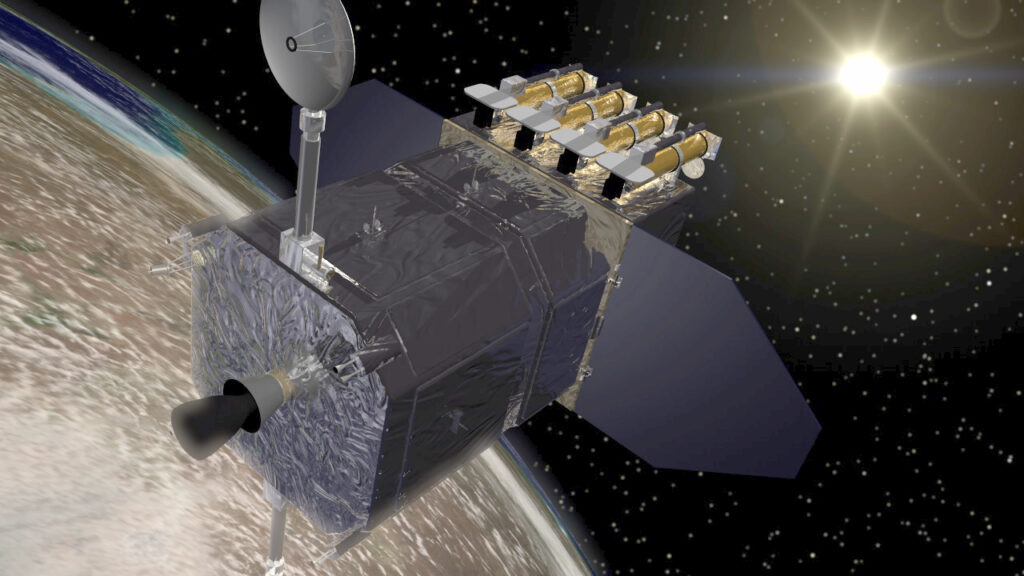 Artist’s conception of the SDO

The main reason I talk about the Sun, of course, is that the Sun is part of the story of astronomy. The Sun was the first star we were ever able to study in depth and much of what we know about stars — how they are structured, how they live, how they die — is based on our centuries-long study of the one on our cosmic doorstep. But the really real reason is that the Sun is still interesting. We’re still learning things about it. We have powerful instrument that do nothing but study the Sun.

One of those is the Solar Dynamics Observatory — a satellite launched ten years ago to figure out how the Sun affects the Earth. Its three instruments study the Sun’s magnetic field, probe its interior, break down its ultraviolet light and study the chromoshere (where the Sun’s light emerges from its surface) and its corona (the extremely hot envelope of gas that you can see during an eclipse).

You can also watch a one-hour slower version set to music. I find it oddly soothing:

A Decade of Sun

A few things you might notice. The Sun revolves on its axis every 27 days. So you’re watching 135 solar “days” play out. Because the Sun is not solid, it rotates differentially — the equator rotates every 25 days while the poles every 35 days. I’ve tried to see this in the longer video and almost convince myself it’s there. But your mileage may vary.

Those bright areas are sunspots, places where the Sun’s tortured magnetic field pokes through the surface. The Sun goes through an 11-year cycle of activity. It starts relatively calm with few sunspots and a nice orderly magnetic field. But over the course of the cycle, the magnetic field becomes more twisted and distorted1 and the sunspots get more numerous and move toward the equator. After 11 years of this, the magnetic field collapses and reverses and we start a new cycle.

The video shows almost a full solar cycle. Solar maximum occurs about 24 minutes in the video. Solar minimum occurs at the end of the video (the solar minimum and the start of a new cycle happened sometime in April or May). Scroll to 24 minutes and then scroll to about 50 minutes. The contrast between the state of the Sun is stark. And this was a gentle solar cycle. Usually, they are even more extreme.

As for SDO’s mission, you can check NASA’s page for the most interesting discoveries. Their work brings me to the third reason studying the Sun is important: its effects on Earth and particularly the dangers posed by coronal mass ejections (CMEs) from the Sun’s surface.

In 1859, there was a spectacular explosion on the surface of the Sun that blasted out a wave of plasma and energy. When that wave hit the Earth, it induced currents in the telegraph network that were so powerful operators were shocked, nearby papers caught fire and the system went down for some time. Aurorae were seen as far south as Cuba.

If such an event were to hit Earth now, the damage could be catastrophic. Electrical grids could collapse, satellites could fail, radio communications could be knocked out. It might do trillions in damage and take years to recover from. In 2012, a CME as powerful as the 1859 blast barely missed us.

Fortunately, we are not helpless against this. The technology exists to harden the electrical grid and would only cost a few tens of billions of dollars. We are also working toward an early-warning system. If you knew a powerful CME was coming, a preventative nation-wide blackout would spare us from the worst.

And that’s why studying the Sun matters. That’s why SDO matters. And that’s why this video is not only aesthetically pleasing, it represents something very important and very much down to Earth. The more we know about the Sun, the better our chances of avoiding a disaster. And just for once, it would be nice if we avoided one.