Sunday Morning! “In the Dream House” by Carmen Maria Machado 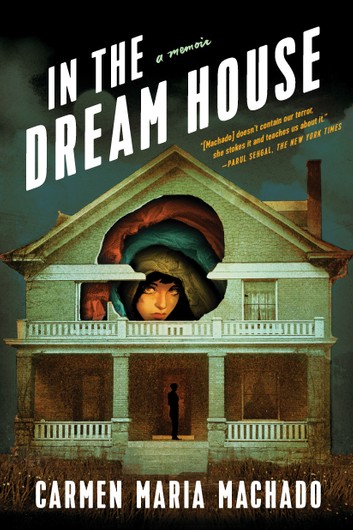 There are two great pieces in Carmen Maria Machado’s memoir In the Dream House that are worth remembering forever. Granted, there are plenty of great sections in the book, but these are ones worth writing down and keeping in your wallet or purse.

In the first, Machado discusses the 1944 George Cukor movie Gaslight, in which Ingrid Bergman plays a young wife almost driven mad by her scheming, manipulative husband. Years earlier, he murdered her wealthy aunt, in order to steal her money. But she was just a child at the time. Now, he has orchestrated a grand love affair with Bergman’s character in order to retrieve some jewels from the Aunt’s home, which she has inherited. It’s a slightly implausible story, but a great Gothic melodrama and, yes, it is where we get the term “gaslighting,” a word that has made the jump from psychology to the internet.

Here’s why: in the story, when the husband goes looking in the family attic for the jewels, his use of the gaslights upstairs causes the other ones in the house to dim slightly. The wife notices this, so he brushes it off as her overactive imagination. The term “gaslighting” refers to a common tactic of abusers: they will try to convince their partner that their perceptions are wrong in a way that causes them to question their sanity. If we can’t trust the evidence of our senses, perhaps we’ve lost the use of our reason.

Machado explains that many people who are unfamiliar with the film think that the husband deceives the wife solely to drive her mad, “as if that is the sum of his desires.” On the contrary, he has a very sensible motivation and the deceit is a means to an end: he wants the jewels and he wants control. Machado writes:

“A reminder, perhaps, that abusers do not need to be, and rarely are, cackling maniacs. They just need to want something, and not care how they get it.”

The theme of deception and manipulation runs deep throughout In the Dream House. Even the book itself plays games with the reader’s perceptions, starting with the gorgeous painted cover, which suggests a V. C. Andrews gothic romance. Instead, this is a memoir of an abusive relationship that Machado endured with a cruel and manipulative girlfriend while she was in an MFA program. It’s a wildly experimental memoir, however, varying tones, voices, genres, and formats from section to section, each of which are given titles like “Dream House as Shipwreck,” “Dream House as Choose Your Own Adventure,” and “Dream House as Mystical Pregnancy.” By the end, she has constructed a mini-library of ways to tell this particular story.

And she has to because there are so few accounts of abuse in lesbian relationships. To a great extent, In the Dream House is about writing In the Dream House and trying to give voice to an experience that Machado had never heard stories about when it actually happened to her. She was young and had never been in a love relationship with another woman in the first place, so that was a disorienting experience in itself, discovering her queerness. And the relationship was at first overwhelming and wondrous, as first loves tend to be. Her girlfriend is blonde and beautiful and graduated from Harvard, and actually desires her, something she had thought impossible as a heavy-set queer girl who undervalued herself. She writes:

“Your female crushes were always floating past you, out of reach, but she touches your arm and looks directly at you and you feel like a child buying something with her own money for the first time,” Much of the book is written as this type of address to her younger self.

The Dream House was a real place, a cabin where her girlfriend lived as she worked on her own MFA at a different university. These programs tend to be isolating as well; there’s a certain pathos of distance they inculcate in grad students and a hothouse atmosphere not entirely dissimilar to a possessive relationship. But, the literary discipline also gave Machado a set of tools to make sense of this situation. The book draws on folk tales and literary studies and even sci-fi to decontextualize and recontectualize her own history.

And maybe that’s what abusers do too: they decontextualize their prey, taking them out of the world of sane and healthy love, in which people don’t fly off the handle at each other without explanation, and they put them into a new context more like a carnival ride or nightmare. I kept being struck by how disproportionate the “woman from the Dream House’s” reactions were, screaming and yelling and terrorizing the person she purportedly loves over offenses that exist only in her tormented mind. Machado makes a strong comparison to Bluebeard, saying yes, he only had “one rule” for his new bride, but if it wasn’t that, there would have been something else she did wrong. There’s always something.

The second point worth writing down and hanging onto:

“Most types of domestic abuse are completely legal.”

By the end of the story, it was easy to hate the woman from the Dream House; there’s something that cuts to the bone about subverting and exploiting the basic human need for love in this way and making a prisoner out of a partner. It’s so cruel and dehumanizing and whenever I have had friends in this situation, I have been tempted to throw their abusers down a well. On the one hand, you realize that abuse is also self-destructive behavior and they are not psychologically well; on the other hand, no one deserves to be treated that way. Anyone who is capable of loving deserves to be loved in return.

That’s not in the book, but maybe that’s a third thing to write down and keep with you.