Sunday Morning! “The Deeper the Water, the Uglier the Fish” by Katya Apekina 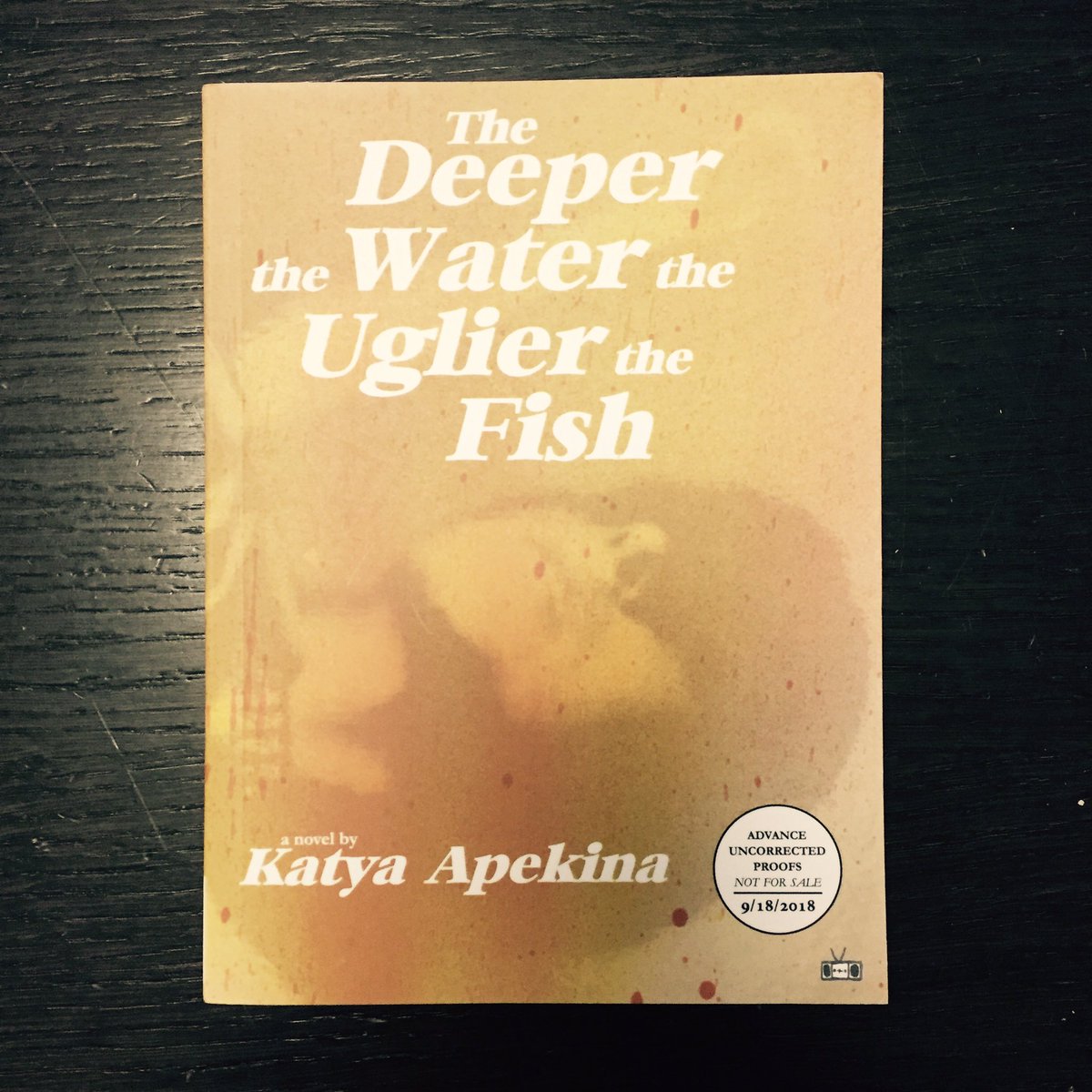 It goes without saying that it’s harder to for parents and children to break up with one another than it is for lovers to call it quits, although it’s sometimes much more necessary. We all break each other’s hearts at times. There are conflicts in every human relationship, but bad parenting is more like asymmetrical warfare. When the child is bad, they might ruin the parents’ reputation in the neighborhood or break their hearts a little. When the parents are bad, they can do scorched earth damage because the child doesn’t know the relationship is toxic, or even what a functional relationship might look like. Or, what a good parent might look like. After all, if you only ever have two parents, it’s hard to tell what’s a bug and what’s a feature. I still find myself in middle-age realizing that certain traits of my own parents were probably not worth emulating.

And I feel compelled to say that my parents were not so bad; certainly, they were not like the parents in Katya Apekina’s debut novel The Deeper the Water the Uglier the Fish. Apekina points out in the Acknowledgements that her own parents “are nothing like Marianne and Dennis” and that’s a relief too. The parents at the center of the story are not exactly terrible; they’re just complicated.

Or, at least, to hear them tell it, they’re not terrible. We all have our own stories, and we all shape our interpretation of events into a narrative where, more or less, we’re the hero. None of us are terrible. None of us are to blame. If every unhappy family is unhappy in its own way, then every member of that family is unhappy in their own way. The threads get tangled.

I’ve heard it said that in a divorce, a shared story is replaced by two competing stories. In the case of Dennis and Marianne, their marriage was once emotionally exhilarating, before it all blew apart, and he has since used the simmering embers of that old explosion to fuel a literary career. He’s been telling their story for years in novels and, to some extent, she’s become his character. Marianne was the tempestuous lesser poet whose madness served Dennis’s muse and he was the tragic hero who had to leave his wife and two daughters, Edith and Mae.

As this story begins, however, Marianne has engineered a plot twist: she’s removed herself from everyone else’s story by hanging herself with a jump rope in the living room, or at least she’s made the attempt. As daughter Edith puts it: “She has recently done something very stupid and I’m the one who found her.” Now, their mother is in the mental hospital and Edith and Mae are under the care of their father Dennis in New York. For Edith, this is a tragedy; for Mae, it’s a great romance.

The very clever thing about the novel is it is structured like an oral history so that everyone can tell their own story, except Marianne, whose relative absence is also a presence. Interestingly, Dennis’s voice is captured mostly through old journal entries; the other characters let us know he was a civil rights activist, a freedom rider, and a great writer. He has a great deal of remorse at having abandoned his family, at his wife’s command, but he’s also a charming egotist and that has done damage to everyone around him. His argument, we can imagine, would be it was all in the service of his art. Because he is charming and handsome and talented, we hear from the young women around Dennis who defend him, and there are plenty. We also suspect he’s kind of a monster.

The daughters have their own needs. Edith still hates her father for leaving them, while her younger sister Mae blames their mother. They both crave the love of a parent, but differ on which one. I will admit that, in the early chapters, I feared the novel was going to turn into a very cliched story of relative strangers creating a healthy family under unusual circumstances. In the movie version, it would be Matthew McConaughey and the angry daughter would come around to her dad, and maybe mom would be alright too. Please forgive me- there are a lot of novels that read like film treatments these days.

But, this ain’t that movie. The story becomes more complicated, deeper, and well, uglier. It’s never clear if Marianne’s mental illness destroyed a happy home, or if it was Dennis’s narcissistic use of her. Was she his muse or his tormentor? And who in their right mind would want to be a muse? On the other hand, Mae looks so much like her mother at that age that perhaps she could be a replacement muse. If she only dressed a bit different, walked a certain way, or was a little crueler to him. Maybe it will be enough for Dennis to write one more book.

In mythology, Pygmalion was a sculptor who fell in love with his own sculpture and, eventually, Aphrodite brought her to life. In a way, Mae is coming of age under very unhealthy circumstances; she’s creating herself and being created. I was reminded as well of Vertigo, in which Jimmy Stewart tries to recreate the lost object of his fascination in a new love. There’s a sense in which everyone we love is a projection of our desires, including our parents. Dennis wants to turn Mae into Marianne, but also keep her at a distance. The things we create rule us.

The daughters, meanwhile, each project their own longing onto their parents. It isn’t long before Edith is setting off to rescue her mother from the mental hospital, when it seems like her mother only wants to be free of everyone else. None of the characters are quite able to see each other; they see their own needs and everyone else is subject to those needs. Almost inevitably, we sense, it will end very badly. The trick the book pulls off is that nobody in it is fully darkness or light. We have sympathy for the worst of them, and see the failings of the most innocent- just like our own family members, no doubt.

[And just a brief note here: my bookstore friends have told me they will get anything by Columbus, Ohio’s small press Two-Dollar Radio, and I see why. It’s a coincidence, but a noteworthy one, that this is the second week in a row I’ve written about one of their books that blew me away.]

So, what are you reading, watching, creating, pondering, or playing this weekend?