Confederate Monuments Are Everywhere in the South. Why? 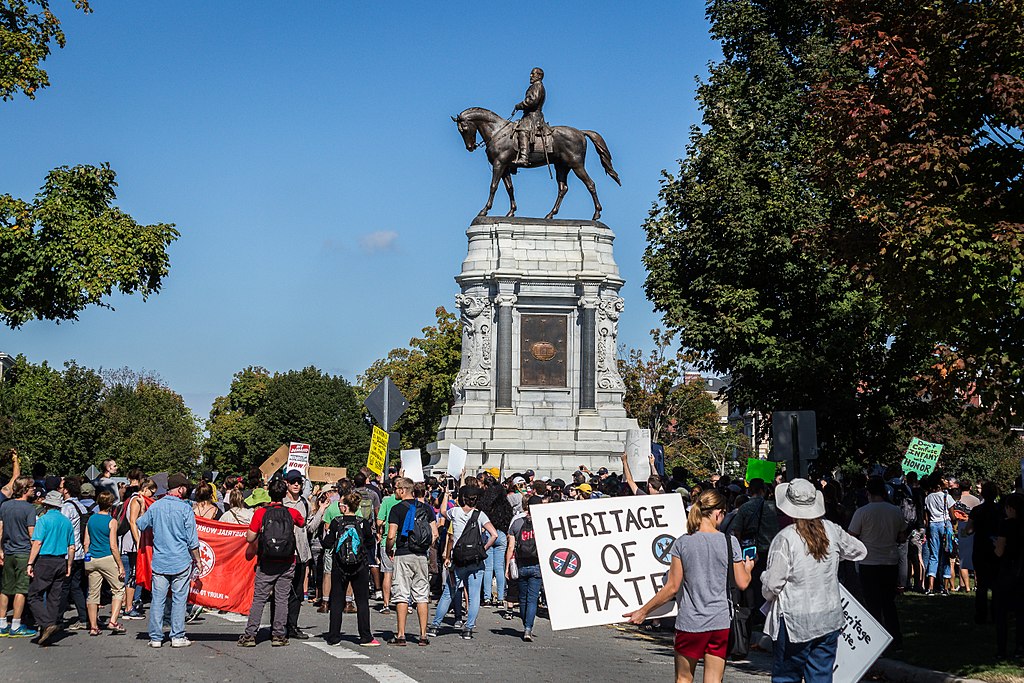 Photo by Mobilus In Mobili via Wikimedia Commons

Growing up in Stone Mountain, GA, I was LITERALLY surrounded by symbols of the Confederacy: the Confederate flag was part of the state flag, there were statues paying tribute to Confederate soldiers, and of course the biggest one of all towering over the landscape: the carving on the mountain itself. I never saw them as symbols of racism. The state flag was just the flag. It has always been there (or so I thought.) The carving was an awesome work of art, chiseled out at great risk to the workers. The Confederate flag itself was just a symbol of Southern pride (and maybe a means to thumb your nose at all the New Yorkers that were relocating to the New South and telling us how much better things were where they came from.)

One day, while wandering through the gift shop at the base of the mountain, I came across a license plate that said “Save your confederate bills, brother! The South’s gonna rise again!” It had a picture of a dead Confederate soldier holding up a tattered Confederate flag. I thought it was funny, so I bought it and gave it to my father. Like any good father when presented with a gift from his child, he displayed it. One day while traveling out of town on business, he came out of his hotel room to discover the angry glares of the black maids. He thought they were going to firebomb his car. When he got home, he removed the license plate and returned it to me, gently explaining that while he knew I did not mean anything offensive by it, a lot of people found it so.

It was the first time anyone had ever told me that other people thought it was racist.

Since then, the Confederate flag has continued to cause controversy. A neighbor friend took a lot of flack when he had it removed from his courtroom. He would later explain to me that the only flags that belonged in a state building were the state flag and the US flag. That made a great impression on me. But to many people in the south, the Confederate flag and all of the statues weren’t symbols of racism, they were just symbols of our “heritage.” And the biggest reason for that is that our history education was woefully whitewashed.

Take Stone Mountain for example. I grew up in the town. We visited the park regularly. I had read all the plaques and toured the museum. I knew all about the states that seceded from the union, about the efforts to create the carving. What I didn’t know was WHY the carving was there in the first place. The modern Ku Klux Klan was restarted in 1915 when a bunch of guys climbed to the top of the mountain and lit a cross on fire. Years later, the Daughters of the Confederacy spearheaded the campaign to create a Confederate Memorial on the mountain. To finance it, they got the US mint to issue a commemorative coin that was sold to raise funds. (Yes, you read that correctly. The United States government minted a coin that was used to fund a Confederate memorial.)

They never taught us that in Georgia History classes.

The Daughters of the Confederacy successfully conducted one of the greatest PR campaigns in American history. During the 1920s, they commissioned all of these statues and monuments to honor their fathers and grandfathers who had died fighting for “the lost cause.” And, of course, to let the black residents of the South know that they were no more welcome in the post-Confederate South than they had been before the war. But the DOC doesn’t get the credit/blame that they deserve for this because they were just a bunch of women. Perhaps the most generous explanation for the failure to provide context on all this propaganda is shame. The ladies who erected these statues are all gone now. Their daughters who were alive at the time would whisper to younger family members about their memories. They would point out the house on Peachtree Street where the Grand Kleagle had once lived. By the time my generation came along, the whispers had stopped. The Civil Rights movement was over, black people once again guaranteed the right to vote, and everyone now agreed that racism was wrong. So nobody wanted to talk about the DOC or the reason all those monuments were erected or the shameful things their ancestors may or may not have done. It was all swept under the rug and the emphasis was placed on Martin Luther King Jr. and how great his message was. The Klan still marched in Stone Mountain park when I was a teen. But instead of being a source of terror, they were seen as a sad bunch of dinosaurs longing for a past everyone else wanted to forget.

But now, with the murder of George Floyd and all of the resulting protests, more people have decided that it’s time for these statues to go. Birmingham, AL removed theirs last week. Richmond has announced the removal of the Robert E. Lee statue. Here in Georgia, protesters are demanding the removal of the statue of General Gordon from the grounds of the state capitol because he was a Klan leader. They are even protesting a Civil War memorabilia store in Kennesaw. The state flag was changed years ago. There is talk of changing the Mississippi state flag. Personally, I say good riddance to them all. I’m not angry with the black people who have decided they find 100 year old statues offensive. I’m angry at the people who MADE those statues offensive. I’m angry with the people who took a flag their ancestors fought under and turned it into a symbol of hatred.

Some would argue that history should be preserved. But the pictures of statues falling here reminded me of the powerful video from Iraq after the fall of Saddam Hussein’s regime. Gleeful Iraqis swarmed the streets, destroying the images of their former dictator. One woman stood over a toppled statue beating it with her shoe to show her anger at Saddam and the evil he perpetrated. Or when Penn State removed the statue of Joe Paterno in the wake of the Sandusky scandal. A lot of people weren’t happy with that decision either. But times change and our values change. Who’s to say how our current leaders will be viewed 100 years from now? So yes, let’s preserve history. Maybe we can even preserve the statues somewhere. In a museum, perhaps. And let people know the whole truth about the Confederacy and the tributes that it spawned.

As for that carving on Stone Mountain, I don’t think it should be blasted off. It’s still a great work of art. But maybe somewhere amongst all the tributes, they could include a mention of the DOC and the history of “Redemption” so that the next generation can know why that carving was put there in the first place.