An Appalling Lack of Rights: From Inalienable, to meritorious, to “Yeah, but…” 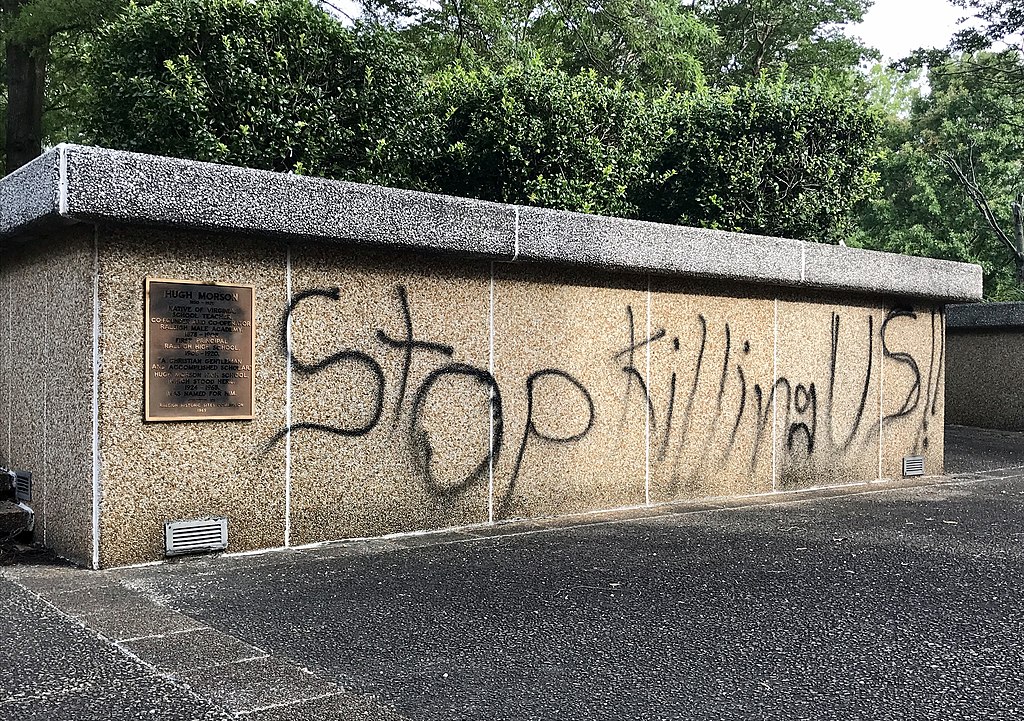 Damage and wreckage from protests related to death of George Floyd in Raleigh, NC 31May2020. Photo by Indy Beattle via Wikimedia Commons

In beautiful language, the Declaration of Independence asserts our inalienable rights, endowed not earned, encompassing the basics of life. The highest of ideals for a free people to self-govern based on those same rights.

Legalese, the specialized discourse of lawyers, is less elegant, and has an innate ability to overcomplicate the simple and bury the obvious in layers of technicality. It is a term for the wordy, sometimes veering into Latin language lawyers use to practice law and confound the laity. It is not hyperbole to say the global phenomenon of legal English runs the world. International business, the United States, the European Union, and vast swaths of the world use it for the most important of decisions, documents, laws, and business transactions.

Which makes the arrangement of words and numbers in the criminal complaint against Derek Chauvin all the more brutal, unflinching, and searing. We see painfully plain language used:

The defendant had his knee on Mr. Floyd’s neck for 8 minutes and 46 seconds in total. Two minutes and 53 seconds of this was after Mr. Floyd was non-responsive.

Most of you reading this would be hard pressed to hold your breath for two minutes and 53 seconds. None of you can do so for 8 minutes and 46 seconds. The initial medical examiner report “helpfully” concludes the autopsy “revealed no physical findings that support a diagnosis of traumatic asphyxia or strangulation,” but the same is certainly true of an impairment of blood flow to the brain. But there we go again: technicalities, legalese, medical terminology distancing us from the reality of a group of armed government officials holding a handcuffed man down until two minutes and 53 seconds past when he quit breathing. We try so hard to flower with words describing the unthinkable, brutal, simplicity of reality.

The Minneapolis Police Officers who killed or stood by while George Floyd was being killed were there to enforce the law. George Floyd had rights as a citizen of the city the police officers were employed by. When push came to shove, the police officers made decisions that showed they felt their authority and decision making in the moment was more important than George Floyd’s rights. The right to life, liberty, and the pursuit of happiness. The right to not be deprived of that life, liberty, or property without due process of law; language verbatim in the 5th Amendment to the Bill of Rights. The right to a speedy and public trial, by an impartial jury of the State and district wherein the crime shall have been committed, word for word found in the 6th Amendment of the Bill of Rights. The right to not be subjected to cruel and unusual punishment, expressly and clearly forbidden by the 8th Amendment of the Bill of Rights.

Instead, Derek Chauvin’s knee spent 8 minutes and 46 seconds depriving every right enshrined in our most sacred documents of law because of his own reasoning. We know the arguments and excuses coming, because they are the same reasons trotted out every time law enforcement crosses a line. He was resisting. He may have had “potential intoxicants in his system”, as the medical examiner helpfully proffered for the upcoming defense. He was possibly a criminal. He was a perceived threat to the police officers.

All of this said as if resisting while handcuffed and restrained by 3 men while maybe being intoxicated and allegedly being involved in passing a possibly counterfeit $20 bill voided George Floyd’s right to not die slowly face down in the street. Whatever the words Chauvin’s defense will use, his actions tell us what he thought, what a trained officer of the law made of this man’s rights. George Floyd “had rights, but…” and then insert whatever rationalization you please.

It’s a very old tactic for law enforcers to use against people they deem unworthy of equal rights. The scars of racial divisions in America run deep from the stabs and slashes of “They have rights, but…” cut deep into United States history by people who wielded such reasoning as a weapon against groups of people they deemed unworthy. Disproportionately against people of color. For over 200 years and counting.

Writing in an 1827 ruling 1 about Mennonites purchasing slaves for the purpose of manumitting (an owner legally freeing their slave) them, North Carolina Chief Justice Taylor used plenty of blunt and ugly legalese to say “They have rights, but…” He led off with “it is merely colorable to talk of future emancipation by law, for as none can be set free but for meritorious services the idea that a collection of them (slave) will perform such services . . . is quite chimerical.” Chimerical is a biological term for organisms having a mix of different genetic material. The wicked who sought the enslavement of their fellow man and who had the temerity to try and rationalize slavery used the term to animalize anyone not white to justify their lack of rights. Which is how Taylor was using it.

Taylor concluded in his ruling: “The right of acquiring property and of disposing of it in any way consistently with law is one of the primary rights which every member of society enjoys. But when the law invests individuals or societies with a political character and personality entirely distinct from their natural capacity, it may also restrain them in the acquisition or use of property.”

That’s legalese for “They have rights, but…” and it’s just as common a rationalization today, but with different language. Rights were subject to the whims and feelings of those who had power deciding “natural capacity” of those who did not have power. And, in the case of people like Chief Justice Taylor and far too many like him, when the law said otherwise it was the law that was wrong. And it was the law that must be moved to appease the hard hearts of unworthy men. Utterly wicked. And brutally effective.

The damnable lie of meritorious rights is the same knee on the same neck of those who lack the power to put the fear of consequence into those choking life, liberty and everything else away from them.

Our country lost its way from the ideal of “endowed by their Creator” in many ways: by not snuffing out the evils of slavery faster, the lost opportunity and generational damage of reconstruction, the fights over Jim Crow, and the violent responses to the Civil Rights movement. Despite all the progress, and many folks’ good faith efforts, we the people still stumble and fumble at making sure equal means equal even when we are trying our best. When the worst actors among us don’t even bother trying, you get eight minutes and 46 seconds of uniformed government officials calmly killing a man because they wanted him to stop resisting their attempts to kill him.

That lack of respect for rights leads to more rights being trampled. The rights of property owners to not have their lives’ work broken, looted, and ransacked as some among the talking heads handwave it away as “it’s just property” or “they have insurance.” The rights of communities to live free of fear from the mob of their peers as they should be free from bad faith police, institutionalized injustice, or tyrannical government. Every excuse, every dismissal, every reasoning to the contrary is more “They have rights, but…” and it’s just as wrong.

Violent criminals that are destroying and looting should be dealt with swiftly. But even they have rights too. No, we aren’t going to start shooting them in the street, despite the more bloodthirsty among us calling for it. We have laws determining when, where, and if force escalation should be employed. Property owners defending themselves and that property have rights to self defense, to bear arms, to not be subjected to the small handful of crazy makers seeking to take advantage of unrest. The country has rules determining when law enforcement needs reinforcements from the National Guard and federal authorities. No one from the president on down gets to make up the rules as they go along. Doing so is telling citizens, protesters, governors, mayors, law enforcement, and yes, even the rioters, “They have rights, but…” and is no more righteous than a knee to the neck despite being draped in flags, badges, and promises of law and order. 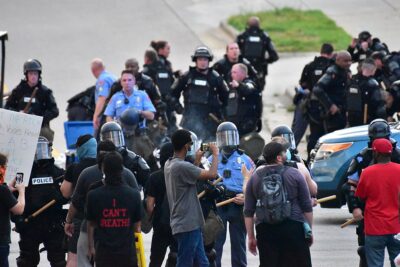 The peaceful protesters should not be treated as if they are the rioters, unless they actually do riot. They have a right to peaceably assemble whether the police like it or not and unless otherwise duly restrained by law. The press has a right to cover the police, and the people have a right to peacefully film the police’s interaction during them. Every attack on a journalist or citizen that is not doing anything wrong other than recording the reactions of their own tax dollars at work is being told “They have rights, but…” is still wrong.

The right thing now is to stop wasting time on rationalizing the indefensible and instead realize all of the injustices before us, not just the ones we all watched for nearly nine minutes of video. The layers of trampled rights before and after these times of trial are repeated because we refuse to learn the lessons of equally applied rights. The rights of all Americans demand we realize that if real change doesn’t come, we will be in for another 200 years of the same excuses for the same violations of rights, just with the names and places changed from time to time.

We need to fight like hell for “rights endowed by their Creator” and defeat every instance of “They have rights, but…” which arises. Because we should all be protective of our rights and restrained by the rights of others. Because an overbearing government doesn’t get to win anymore than the mob does in a free self-governing people. Because the Derek Chauvins of the world sure as hell aren’t God, their knees are not justice, and the necks of people – all people, everywhere – need to be protected better than we did George Floyd’s.