A few days ago in the immediate aftermath of the killing of George Floyd, I decided to go for a walk. “Be careful,” he said.
Later that evening, I was chatting with my mother and she also asked me to be careful. I realized this is something she does every time I leave.

When my Dad was alive he would say the same thing. He was especially worried because in high school I had a lot of white, female friends.

For a long time, ever since I was a little kid, there has been a target on my back. I know it sounds overly dramatic, but it is true. In fact, there has been a target on the backs of many black men in America. Again, people will scoff at such a saying but especially after this week, it feels more true than ever before. There was a target on George Floyd’s back, especially on Memorial Day, the day he died.
I’m not one that gives in to emotion, but it is hard to not be mad. I know America can be a good nation. I know there are good police. I know there are good white people. I know that we aren’t living in a time of segregation like my Dad did. But the fact remains: even with all of these caveats, a black man lies dead and it seems his only crime was the color of his skin.

The cold fact is people see someone like me as a threat. I have to be careful in order to survive. But let’s be honest; even if I was careful I could still be hurt because I’m black. This is the world that we live in.

I was mad about many things. George Floyd was a gentle giant, a committed Christian who moved to Minneapolis a few years ago from his native Houston in search of a better life. I’m mad that the police officer alleged to have killed Floyd, Derek Chauvin, had a long history of complaints and for some reason, he was able to stay on the force. I’m mad that Floyd was engaged to be married and he never got the chance to walk down with his love. I’m upset because what happened to Floyd has happened before. Jamar Clark, Philando Castile, all of them died at the hands of the police. Finally, I’m mad because it could have been me. It could be me. George Floyd is only a few years younger than I am. Could a traffic stop on some street in Minneapolis turn into something that threatens me?

Then there were the riots. Coming from Michigan, you learn about the 1967 Detroit riots. But even though I knew the Twin Cities had its problems with racial disparities, I would have never, ever thought there were going to be riots like what I’ve seen in the past few days. To say that Minneapolis is burning is as weird as saying Lake Wobegon is burning, but it has happened. Lake Wobegon is burning. 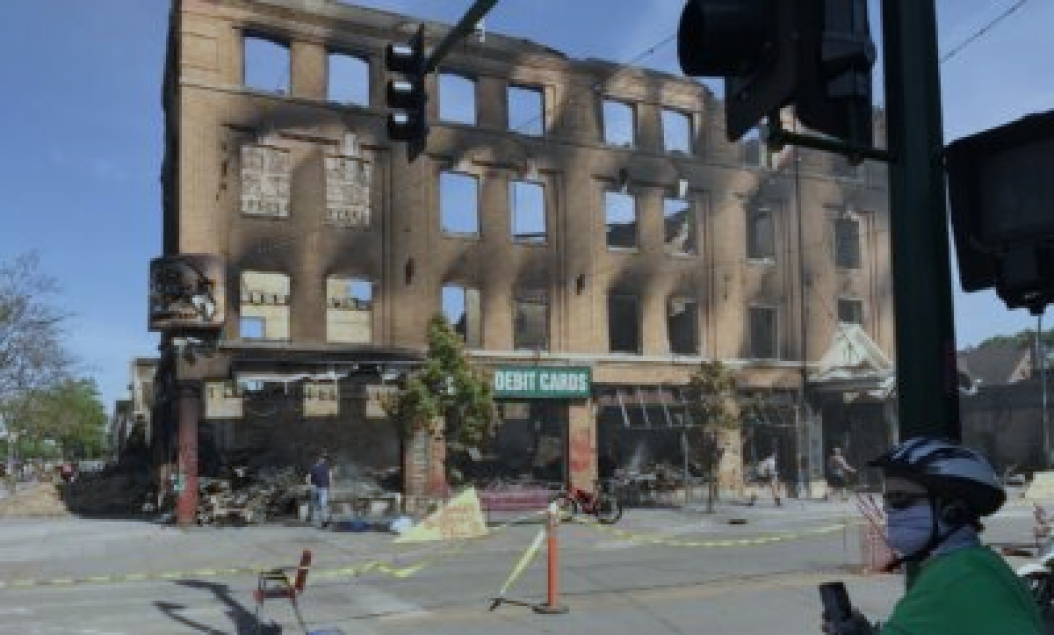 Near the Lake and Minnehaha epicenter. Photo by Dennis Sanders.

On Sunday, my husband and I walked down to the “Ground Zero” of the unrest, the intersection of Lake and Minnehaha Avenues. Lake Street is the Main Street of Minneapolis, as it stretches from its eastern end at the Mississippi River to the western end near Bde Maka Ska (formerly Lake Calhoun). In the area of Lake and Minnehaha is an intersection of various communities, from immigrants from Latin America and Somalia to African Americans and Native Americans. Minneapolis might be known as a city of Scandanavians (which it still is for the most part), but this area showed the multicultural Minneapolis that is just around the corner.

Walking around made you wonder if this was Minneapolis or some war-torn city on the other side of the world. There was an Arby’s burned to the ground. Several grocery stores were looted and closed for the time being. There was — rather, what was left of — a building where you could still see smoke rising up from the rubble. There stood a local Indian restaurant that is now just rubble. The post office was gone. Everywhere you look, what had been buildings filled with thriving businesses are now either damaged by looting or a pile of rubble. Lake Wobegon is on fire. Lake Wobegon is destroyed.

I don’t know what has to happen next when it comes to race. The problem is that when you say that things like police brutality are a problem there are people (many white, but a few who are black) that will tell us we should be talking about black-on-black crime or that there are white people who get killed by the police as well. Of course, both are true. Black-on-black crime is a problem. White people do end up dead by the hands of the police. But the thing is, these can be true and the racial implications of African American men ending up dead by the police can be true as well. To say that they can’t both be true is to engage in some sort of racial denialism.

There need to be changes to policing, but we don’t need technical fixes like body cams. Derek Chauvin and the others all had body cams and George Floyd is still dead. Maybe removing qualified immunity would force cities to be more careful and keep their police forces in line.

African Americans have come a long way from the days of slavery and Jim Crow. We’ve seen a black family occupy the White House. The laws and mindsets that kept African Americans down for so long no longer hold us back. The life I live in 2020 Minnesota is far different than life was for my late father growing up in 1940s Louisiana. America is not where we used to be. But the events of the past week are a stark reminder we are not where we should be.

Before we went to witness the devastation of the riots, my husband and I spent Saturday afternoon going to 38th and Chicago Avenue, the exact spot where George Floyd met his unjust fate. We saw the mural made in Floyd’s memory and it was interesting to see, toward the bottom of the mural, “Now I can breathe.” I don’t know if my husband understood the significance of that phrase, but I did. In a world where African American men are always viewed with suspicion, the artist hopes that in the next life, Floyd isn’t judged by the color of his skin.

I hope that on this side of heaven one day soon African American men and indeed all of humanity, can breathe as well.