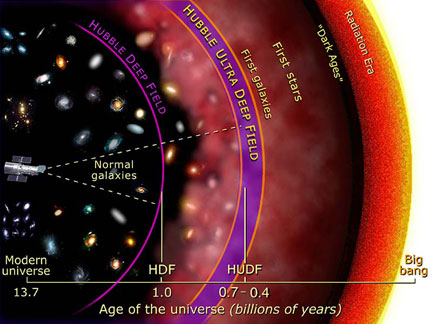 Image Credits: UDF – NASA/ESA/S. Beckwith(STScI) and The HUDF Team. For UDF Location and Age of the Universe graphics: NASA

The figure at the top of this post illustrates the concept. The Hubble Space Telescope gave us the universe out to about a billion years after the Big Bang, when the big galaxies had formed. Later instruments extended its view into infrared getting to about 400 million years after the Big Bang, when small galaxies were merging into big ones. The Radiation Era, the first 300,000 years of the Universe, we can see in the Cosmic Microwave Background. In between that is the unknown.

It is into that unknown that the James Webb Telescope will look.[efn_note]Assuming it flies.[/efn_note] We will finally get to see how the universe went from the chaos of the Big Bang to the relative order of small galaxies. JWST has had long delays and it’s not clear when it will fly.

But this week, we got a hint of what it might see:

In our 13.8 billion-year-old universe, most galaxies like our Milky Way form gradually, reaching their large mass relatively late. But a new discovery made with the Atacama Large Millimeter/submillimeter Array (ALMA) of a massive rotating disk galaxy, seen when the universe was only ten percent of its current age, challenges the traditional models of galaxy formation. This research appears on 20 May 2020 in the journal Nature.

Galaxy DLA0817g, nicknamed the Wolfe Disk after the late astronomer Arthur M. Wolfe, is the most distant rotating disk galaxy ever observed. The unparalleled power of ALMA made it possible to see this galaxy spinning at 170 miles (272 kilometers) per second, similar to our Milky Way.

This kind of galaxy is unlikely to have existed only a billion years after the Big Bang. What galaxies we can see at that distance are a wreck of merging and colliding galaxies. Even a large galaxy should be more like a ball of light. It takes billions of years for a young energetic galaxy to settle down into the relatively ordered middle age that galaxies like the Milky Way are in.

What does it mean? It’s hard to tell. But we’re going to be looking for more of these. And when JWST goes up, we’ll get a much clearer idea of where it fits into our understanding.

[ThTh2] A good look at 50 things we’ve learned during the first phase of COVID-19. And here is a look at what activities are low-risk and what are high-risk. One surprise for me: short- to medium-haul airplane flights appear to be low risk.

[ThTh3] And sticking with COVID-19, did Florida fire someone to hire data? Here’s a deep dive into how information gets to the public.

[ThTh5] 40 years ago, Mount St. Helen’s exploded. Here’s the log from an astronomer who was only 90 miles away. Click through for the thread and his excellent description of the sky conditions.

He was the only person on the summit, ~90 miles from #MountStHelens…#MSH40 pic.twitter.com/Z2kEDVEYBH

[ThTh7] Comet Swan hasn’t been as spectacular as hoped, but it should be visible through binoculars after sunset.

[ThTh8] I had never heard of this before. Amazing.

This is Johannes Kepler in a letter he wrote in 1610 telling Galileo that they need to do more telescopic observations of the Moon and Jupiter before spacecraft missions start visiting those planets. Yep, this conversation actually happened…in 1610 🤯 pic.twitter.com/O8oeBXzG16