Silent But Deadly: Malaria in WWII 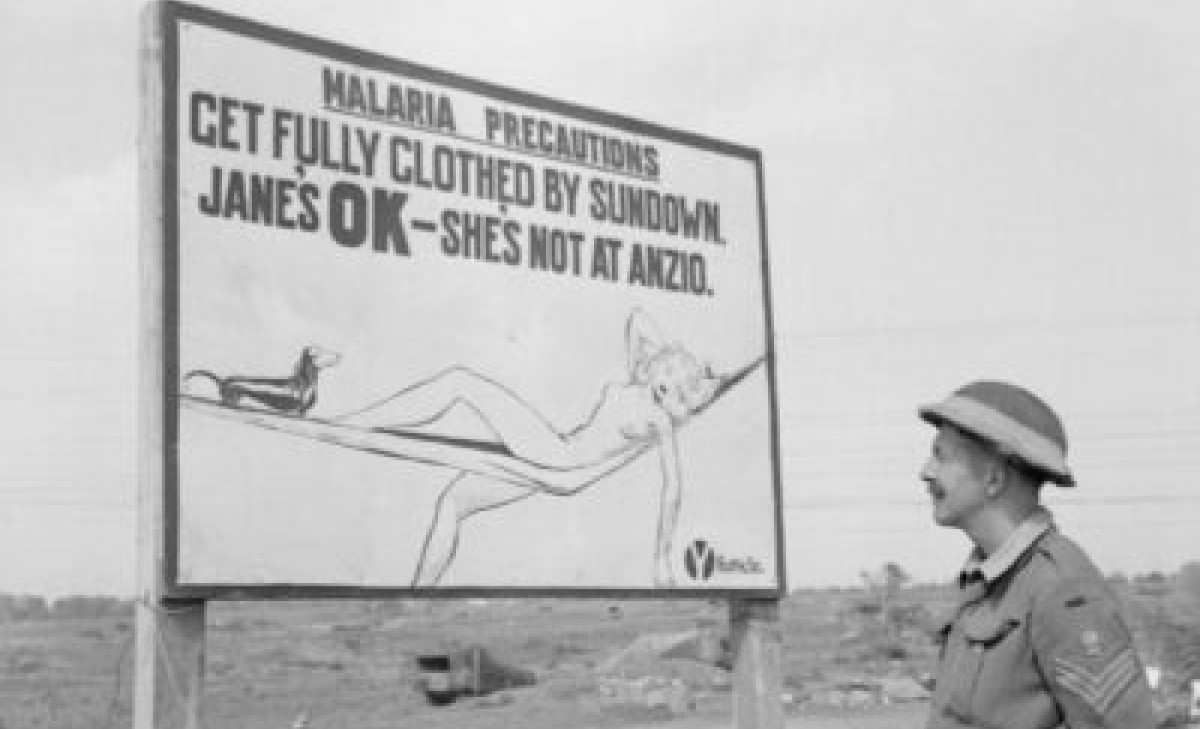 With microbes on our minds, it’s time to talk about one of the gravest threats soldiers in WWII faced — the threat of disease.

Military leaders have long known that disease poses an even greater threat than the enemy. Men in living in close quarters, traveling through lands with endemic illnesses they’ve never encountered, are sitting ducks for disease. Seeing the writing on the wall as war raged in Europe, the US military, in partnership with titans of industry and the finest scientific minds, launched an all out offensive to prepare as many vaccines as they possibly could to protect troops in case the US was drawn into the fighting. Once America entered the fray, US troops went into battle protected against such scourges as smallpox and yellow fever, saving untold lives. This military research led to the vaccines we use to this day – pneumococcus, influenza, rubella, among many others.

But one disease eluded them. One disease above all others tormented our brave fighting men – a disease that still sickens hundreds of millions and kills between 400-600,000 people every year – malaria. Malaria, that ancient foe, the invisible enemy that struck down historic figures like Alexander the Great and Lord Byron, preyed upon American troops during World War II. 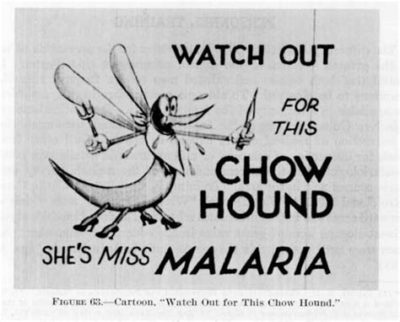 Above – Anti-malaria propaganda abounded during wartime

Malaria is spread when a mosquito carrying one of five different species of a parasite called Plasmodium bites a host. The Plasmodium parasite attacks the red blood cells and liver. While the form of malaria most GIs contracted in the Pacific Operating Theater was of a benign form, even mild malaria is debilitating, causing high temperatures, violent chills, severe body aches, and weakness that could linger for months. Others were not so lucky, contracting the malignant form much likelier to cause death. Worse still, malaria is not just a terrible, debilitating, potentially fatal disease, it also recurs, so even when a person recovers, it can flare up again at any time. 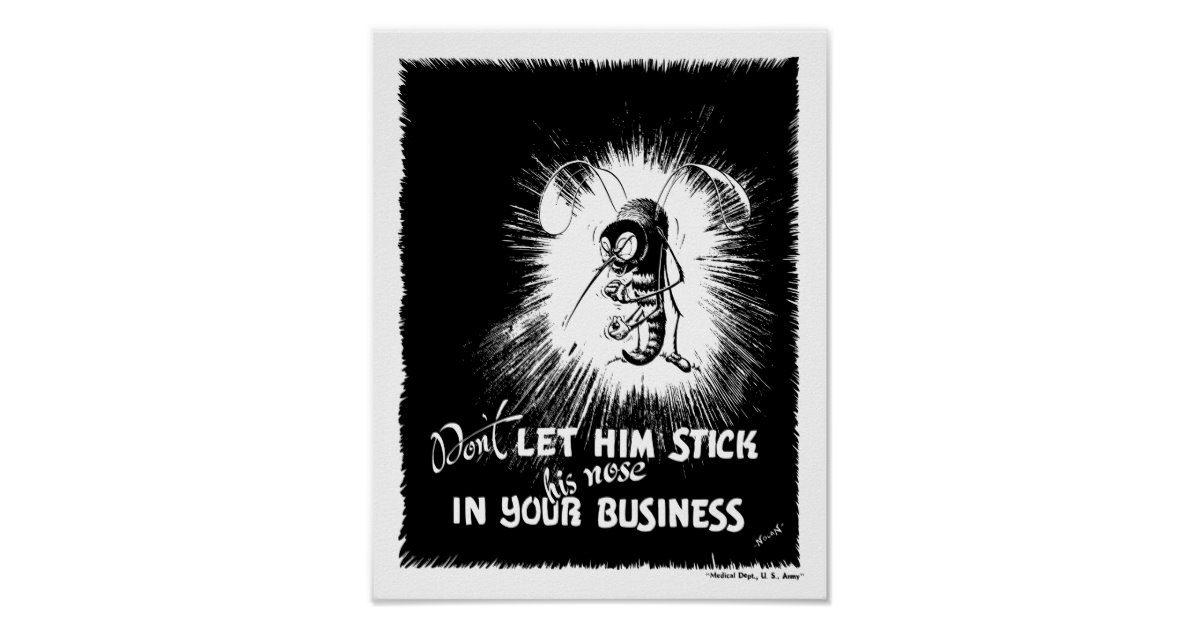 The Pacific theater was practically tailor-made to enable the spread of malaria.  The humid environment produced lots of standing water for mosquitoes to breed in, and the presence of hundreds, at times even thousands of unwitting victims as troops moved from island to island across the South Pacific, enabled the parasite to spread at will. While medicine did exist in the form of a concoction derived from tree bark called quinine, getting the men to take it was another matter entirely. Many men didn’t think it necessary, and many others found their quinine supply too burdensome to carry and chucked it from their packs. Even worse, vast amounts of medical supplies, including a large quantity of precious quinine, had to be abandoned when the Japanese captured the Philippines. 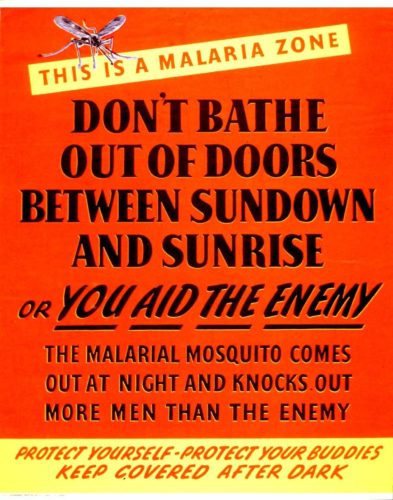 As the Japanese advanced, the Allied troops, beset by illness, were unable to stop them. During one campaign alone, there were 4000 cases of malaria amongst 1000 soldiers. That’s not a typo — each man was down with malaria an average of four times. (Since malaria is caused by a parasite, it’s possible to contract it repeatedly, and malaria can recur without reinfection if the parasite goes dormant). The rate of Plasmodium infection overall is believed to be a quarter of all the men in the Pacific, and each of those men became too sick to fight numerous times. Rules were changed to make men stand guard even with fevers of 101 degrees! The Medical Department estimated that in 1941 and 1942 the casualties from malaria in the Pacific theater outweighed those from combat by seven to ten times. 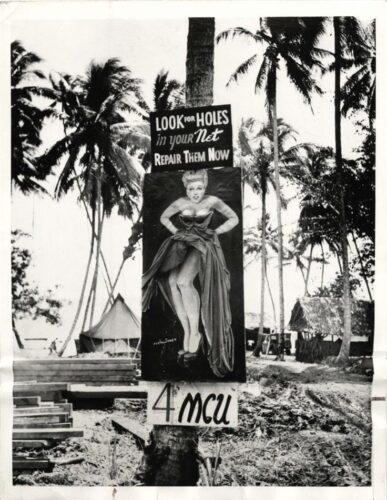 Above: Mosquito nets were (and remain) one of the best ways to prevent malaria in areas where the disease is endemic

Troops in Southern Europe were also afflicted. During the Sicily campaign, 21,000 troops were admitted to the hospital for malaria, and only 17,000 as casualties of war. Soldiers in North Africa also suffered from malaria, albeit less often thanks to the drier climate. By war’s end, nearly a half-a-million American men had been infected with the disease. 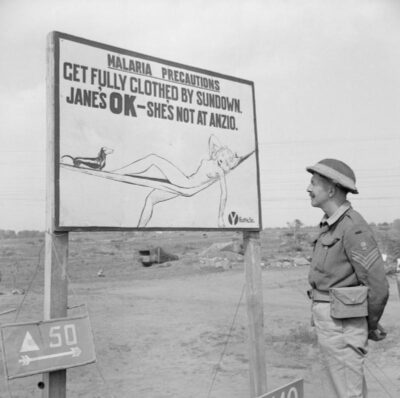 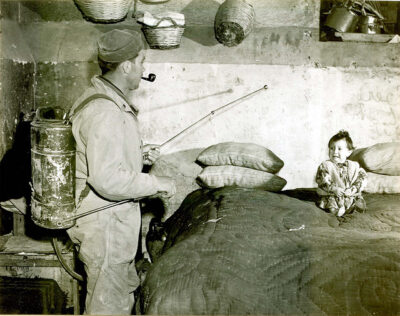 Above – a malaria warning to US troops at Anzio, in Italy; Below – while this poor baby is less than thrilled, the arrival of the Allies with DDT in Italy and subsequent eradication of malaria in Italy saved 20,000 lives every year

The Army geared up for a full on assault against malaria in the South Pacific, assigning Col. Howard F. Smith as “theater malariologist”. But unfortunately the Axis struck first. When the Germans captured The Netherlands in 1940, they seized control of the world’s supply of harvested cinchona, the bark which quinine is made from. And not long afterwards, the Japanese took the island of Java in the Dutch East Indies, the only place on earth where cinchona was commercially grown at the time. (The Japanese also controlled the majority of the world’s supply of pyrethrum, the flower from which the mosquito-killing insecticide pyrethrin was made.) The Allies were left with very little quinine, and began hunting for a replacement.

While scientists had come up with a synthetic version of quinine called chloroquine, due to safety concerns they shelved it till after the war – a pity because chloroquine is actually safe and effective in humans and is still in use to this day. The Germans were less discerning, giving their troops the untested chloroquine and an advantage over the Allies. 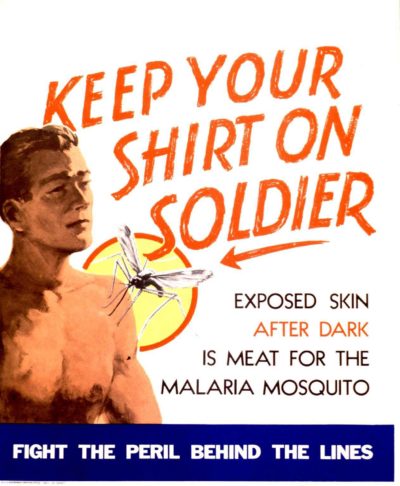 Above – Before the advent of medication and pesticide to fight malaria, soldiers had to rely on low-tech barrier methods

Eventually the US military settled on a preventative drug called quinacrine, at the time commonly called Atabrine. Unfortunately Atabrine had some pretty major side effects like stomach upset, headaches, and worse, it turned the skins of those men who took it a shocking shade of yellow. It could even cause psychosis in an unlucky few, heightening anxiety in others — the last thing any serviceman needed in wartime — more nerves. Rumors flew, assisted by Japanese propaganda, that Atabrine made men infertile. It wasn’t the case, but coupled with the other unpleasant side effects of Atabrine, it was enough for many fighting men to refuse their medication. The authorities had to station medics at chow lines to distribute the pills, ensuring every soldier, sailor, pilot, and Marine took their required dose. Of course, when men were under fire, scrambling just to stay alive, this discipline fell apart and many men skipped doses either because they were too busy, or too suspicious to take them. 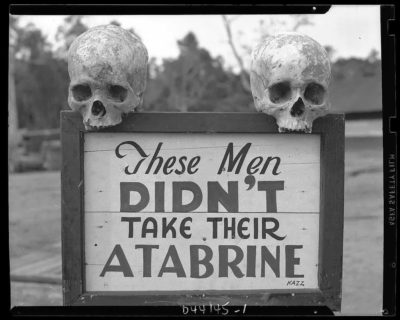 Atabrine was nowhere near perfectly effective even when taken regularly, and so the Army began to look for other options. With the pesticide pyrethrin unavailable, with most of the supply in the hands of the Japanese, they began to experiment with a new pesticide called DDT. While the compound DDT had been around since the 1800’s, its ability to kill insects not only when first applied, but for quite some time afterwards, was not realized till the late 1930’s. An American attache to Switzerland, where the discovery was made, sent back DDT samples to the Army and the rest is history. 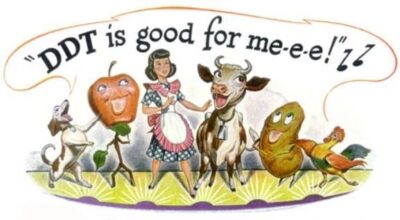 Above – While we now understand the environmental impact of DDT, at the time of its invention it seemed like a Godsend

DDT was astronomically valuable to the land troops because it could be sprayed on tents and walls, and unlike most pesticides that needed constant reapplication, it stayed effective for up to six months. They also learned that when mixed with diesel oil or kerosene DDT could be sprayed onto bodies of water to kill mosquito larvae and eggs. By the end of the war, the Army had pioneered several mechanisms by which to deliver DDT — backpack sprayers, aerial spraying using planes — and while we know now that DDT does have a negative environmental impact, at the time DDT was an unqualified blessing for the brave men struggling to survive in terrible conditions. 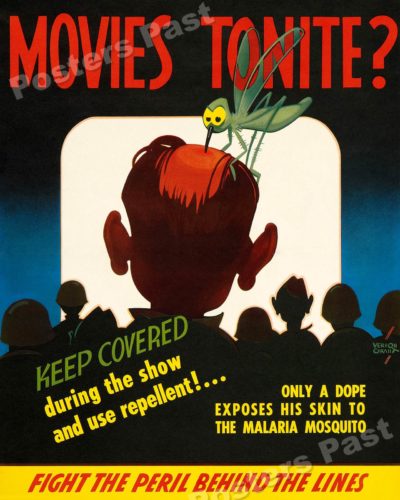 With Atabrine and DDT in their arsenal, the military authorities launched one final assault, to win the hearts, minds, and cooperation of the fighting men. Their weapon was propaganda. GIs were deluged with educational posters, inspirational slogans, medical lectures, and even cartoons. Stars and Stripes featured “Malaria Moe”, a character drawn by enlisted man Frank Mack, designed to educate troops about the risks of malaria. The Armed Forces Radio Service broadcast so many mosquito advisories that it was jokingly referred to as “The Mosquito Network.” On Guadalcanal, the ASFR channel ran a program called “The Atabrine Cocktail Hour” featuring music allegedly from places like “The Fungus Festooned Fern Room”. 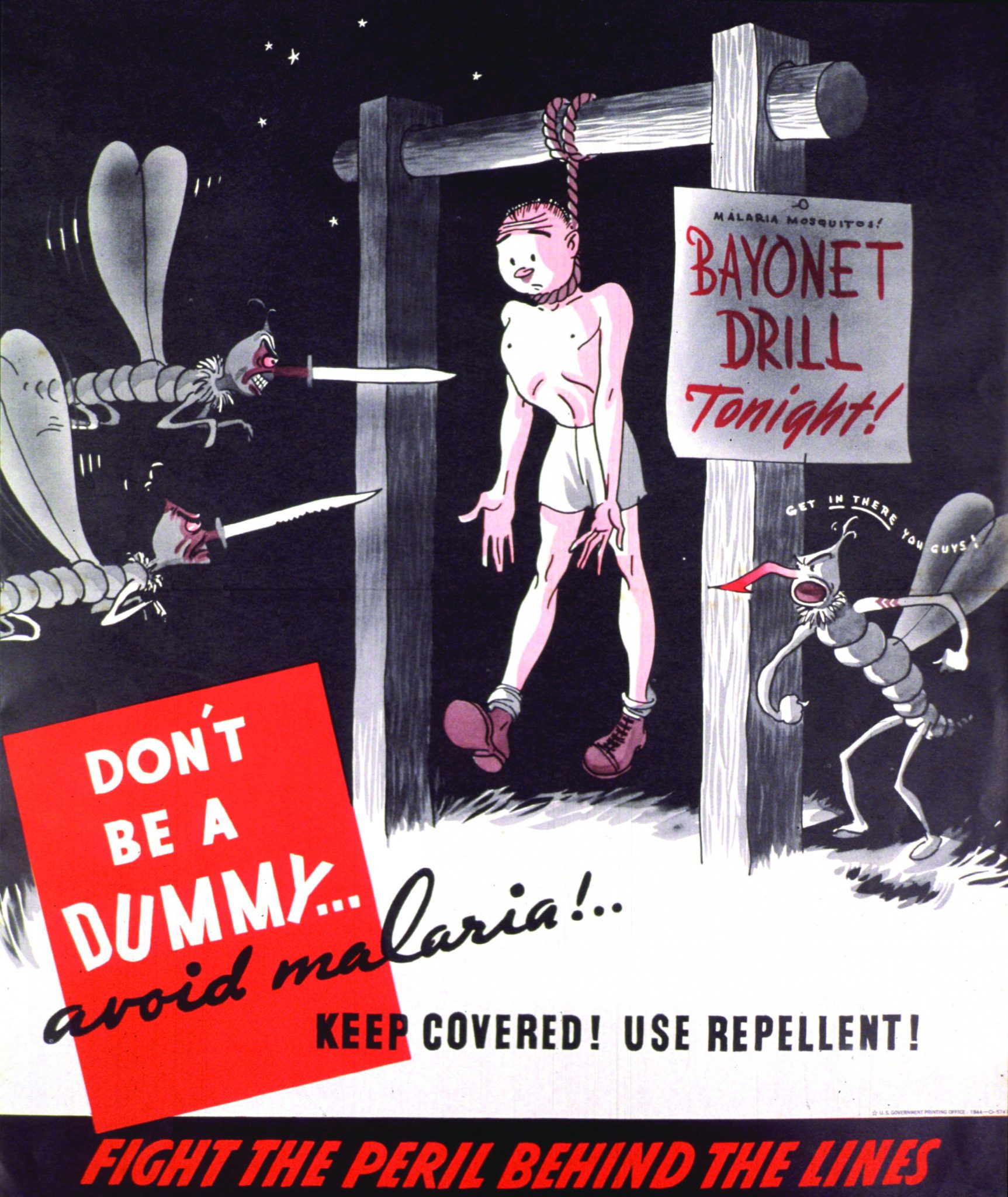 Perhaps unsurprisingly, these young men so far away from home responded best to propaganda in the form of entertainment. Future famous artists like the famed author-illustrator Dr. Seuss – who drew a booklet and a cartoon-festooned map for GIs, and Frank Mack, the creator of “Malaria Moe” who later went on to draw the Ripley’s Believe it or Not comics for many years, also took part in the program.

Above – a page from Theodore Geisel’s (aka Dr. Seuss’) antimalarial WWII artwork

In addition to his work for Stars and Stripes, Mack created ribald pinup calendars for 1944 and 1945 that the troops loved. 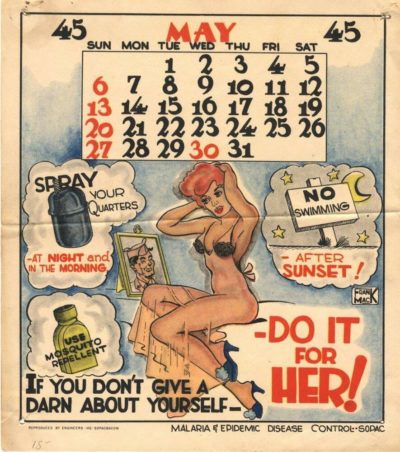 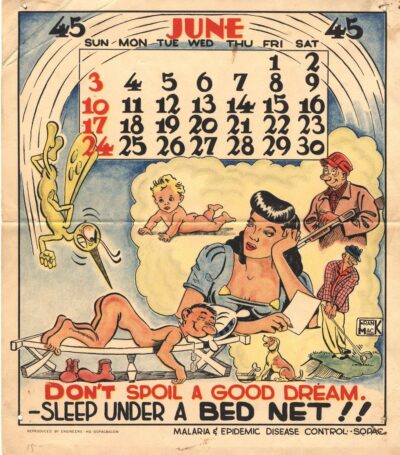 Above: Samples of the anti-malarial calendar art of enlisted man Frank Mack

As the of the war tide turned and the Japanese troops became increasingly cut off from their supply lines, they began to suffer rates of infection as high, if not even higher than the Allies. After the Battle of Buna, the 3d Portable Surgical Hospital reported every Japanese prisoner they received for treatment without exception was suffering from malaria. It is estimated that by war’s end 90% of Japanese military units were rendered ineffective by malaria, dysentery, and other diseases. An influx of healthy American soldiers into the Pacific Theater, armed with Atabrine and DDT, allowed the Allies to win the day.

While at first blush it may be hard to believe that something as small as microbe could serve as both mortal foe and eventually friend, the truth is, as humans squabble amongst ourselves, the real enemy is and always has been disease, taking far more lives than any war ever has. Humanity’s biggest enemy is not our fellow man, but the invisible predators that we cannot see.

This article was originally published in The Star, the newsletter of the American WWII Orphans Network